Virtual Event: We Are the Baby-Sitters Club 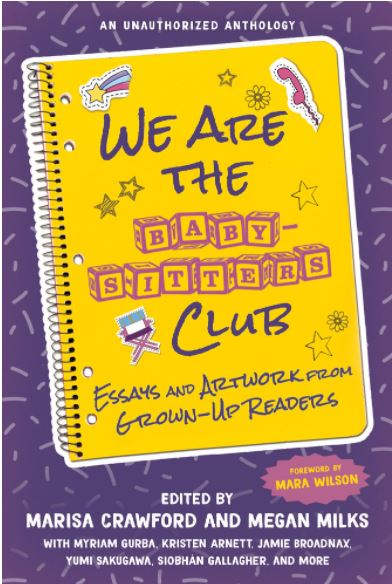 Join us on Friday, July 9 at 6pm PT when Marisa Crawford and Megan Milks are joined by contributors to their anthology, We Are the Baby-Sitters Club: Essays and Artwork from Grown-Up Readers, on Zoom!
Featuring
Sue Ding, Siobhan Gallagher, Chante Griffin, Myriam Gurba, Gabrielle Moss, and Frankie Thomas

Praise for We Are the Baby-Sitters Club
"We Are the Baby-Sitters Club is a complicated paean to Ann M. Martin’s serial magnum opus, grappling with its loose ends and blind spots through the passionate insight of grown-up fans; it’s a varied volume of deeply personal literary criticism that takes tween girls’ lives and culture seriously—finally!" —Johanna Fateman, founding member of Le Tigre

"More than a book about a series of books, it is an ode to the child readers we were, and the ways we have learned to name the experiences we couldn't find written."  —Melissa Febos, author of Abandon Me and Girlhood

“An explorative collection of essays that sends you right back to those nostalgic moments of childhood.” —Shannon Wright, cocreator of indie bestseller Twins

"I picked up this collection because I was obsessed with the BSC as a child. I couldn't put it down because, as an adult, I am obsessed with the complexities of gender, friendship, race, and power. This anthology helped me connect my childhood and adult interests in a way that few things have. " —Ann Friedman, coauthor of Big Friendship: How We Keep Each Other Close

In 1986, the first-ever meeting of the Baby-Sitters Club was called to order in a messy bedroom strewn with RingDings, scrunchies, and a landline phone. Kristy, Claudia, Stacey, and Mary Anne launched the club that birthed an entire generation of loyal readers.

Ann M. Martin’s Baby-Sitters Club series featured a complex cast of characters and touched on an impressive range of issues that were underrepresented at the time: divorce, adoption, childhood illness, class division, and racism, to name a few.

In We Are the Baby-Sitters Club, writers and a few visual artists from the original BSC generation will reflect on the enduring legacy of Ann M. Martin’s beloved series, thirty-five years later—celebrating the BSC’s profound cultural influence.

We Are the Baby-Sitters Club: Essays and Artwork from Grown-Up Readers (Paperback)

“We Are the Baby-Sitters Club is the ultimate companion guide for a generation of devout superfans. This book revisits the beloved series through grown-up eyes—but never loses the magic we all felt the moment we cracked open a fresh new book.