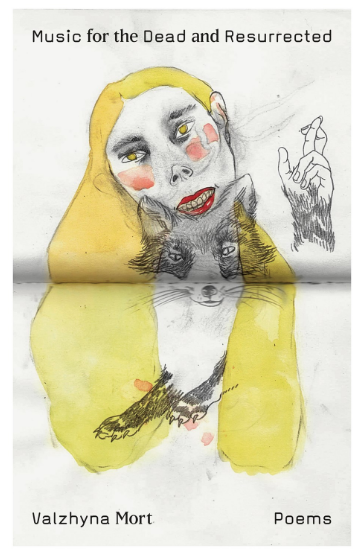 Join us on Thursday, November 12 at 5pm PDT when Valzhyna Mort discusses her latest collection, Music for the Dead and Resurrected, with Carolyn Forché on Zoom!

Praise for Music for the Dead and Resurrected

“The voice of Valzhyna Mort is a miraculous reminder that words can do many things—they can dance, can bask in irony, can praise love but they can also tell the truth. These poems are not only moving, they do the most elementary work of human language. They elevate the miserable, the barbarian, the numb to the level of universal idiom of wisdom and grace.” ―Adam Zagajewski, author of Asymmetry

“At the core of Valzhyna Mort’s lyric fusion of personal and collective history is the uncontrolled nuclear chain reaction at Chernobyl, spreading the radiation of an unknown tongue across her natal city of Minsk, Belarus, a city that hides its column-ribs/under a nurse-clean robe of snow pandemics. In the liminal space between language and silence, at dizzying imaginative speed, Mort transmutes her third language, English, into something resembling a fourth: the language of all that has been kept from consciousness concerning the century past. Her lyric art in contemporary English is astonishing, and glimmering beneath it is something not often encountered: the sensibility of another world, arriving to inform our perilous present. Music for the Dead and Resurrected is fiercely original, and a tour de force.”―Carolyn Forché, author of In the Lateness of the World

“Mort is well-known in Europe as a crusader on behalf of Belarusian language and identity. In English, cast in rapid-fire free verse lyrics and sequences, her poems seem to channel her country’s complicated and highly pressurized history into a voice that is simultaneously strange, intimate, lonesome, hilarious, surreal, and all too real . . .”―Craig Morgan Teicher, NPR

About Music for the Dead and Resurrected

In her letters to the dead, the prizewinning poet Valzhyna Mort relearns how to mourn those erased by violent history.

In Music for the Dead and Resurrected Valzhyna Mort asks how we mourn after a century of silence and propaganda. How do we remember our history and sing after being silenced? Mort draws on intimate and paradoxical firsthand accounts of a past grandparent generation of the Soviet labor camps, redistribution of land, and massacres of World War II in Belarus. As her country is being run by a longtime dictator, the poet creates a ceremony of mythmaking for the erased history and family.

Music for the Dead and Resurrected is a space where the living and the dead can coexist, where the Belarusian woods can act as witnesses to forgotten lives, and where musical form can create a new lyric mythology and an uncompromised language of remembrance. Mort, born in Belarus and now living in America, teaches us that the remembrance of private histories has a power to confront collective, violent American myths.

Music for the Dead and Resurrected: Poems (Hardcover)

In the Lateness of the World: Poems (Hardcover)