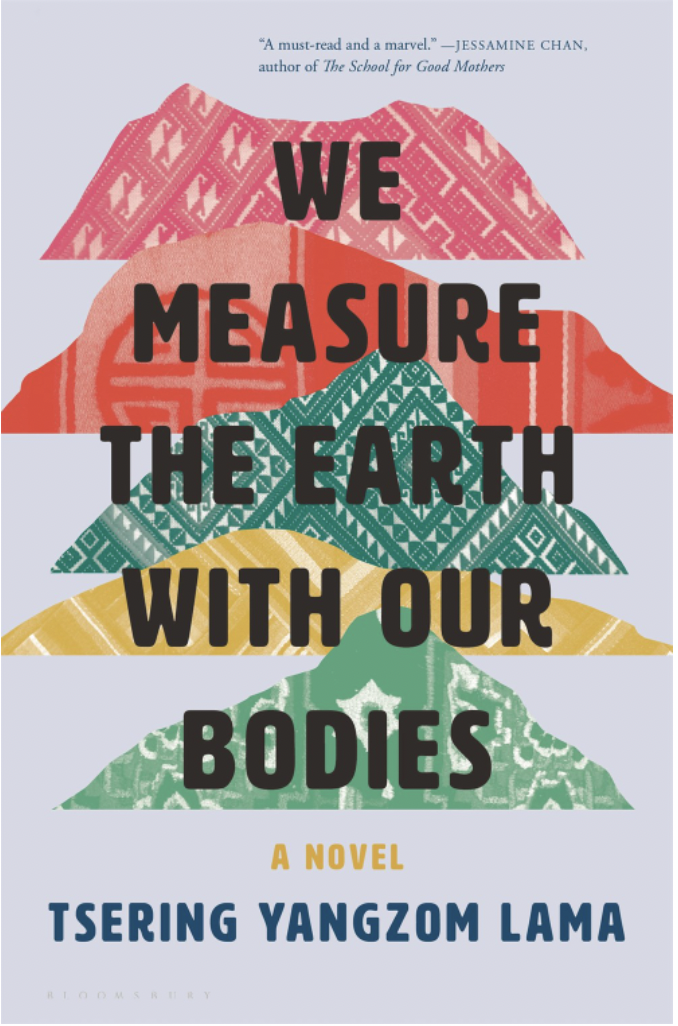 Join us on Tuesday, June 14 at 6pm PT when Tsering Yangzom Lama and Shruti Swamy join us in conversation to celebrate the release of We Measure the Earth with Our Bodies on Zoom!!

Watch online by registering at the link below
https://us02web.zoom.us/webinar/register/WN_e5xNrkHTTZiYB_N1qtmzpQ

This event was previously scheduled at 9th Ave, but is now exclusively online. Join us then!

About We Measure the Earth with Our Bodies
For readers of Pachinko and We Need New Names, the compelling and profound story of a Tibetan family’s journey through exile.

In the wake of China’s invasion of Tibet in 1959, Lhamo and her younger sister Tenkyi arrive at a refugee camp on the border of Nepal. Lhamo and Tenkyi survived the dangerous journey across the Himalayas into exile, but their parents did not. Now, Lhamo—haunted by the loss of her homeland and the memory of her mother, a village oracle—is trying to rebuild a life amid a shattered community. Lhamo finds hope in the arrival of a young man named Samphel, whose uncle brings with him an ancient statue of a nameless saint—a statue last seen in their village and known for vanishing and reappearing in times of need.
Decades later, the sisters are separated, and Tenkyi is living with Lhamo’s daughter Dolma in Toronto. While Tenkyi works as a cleaner and struggles with traumatic memories, Dolma is vying for a place as a scholar of Tibet Studies. But when Dolma comes across the statue of the nameless saint in a collector’s vault, she decides to reclaim it for her family and community, even if it means risking her dreams.
Breathtaking in its scope and powerful in its intimacy, We Measure the Earth with our Bodies is a gorgeously written meditation on colonization, displacement, and the lengths we go to remain connected to our families and ancestral lands. Told through the lives of four people over fifty years, this novel provides a nuanced, moving portrait of the little-known world of Tibetan exiles.

About Tsering Yangzom Lama
Tsering Yangzom Lama holds an MFA from Columbia University and a BA from the University of British Columbia in creative writing and international relations. She has received grants and residencies from the Canada Council for the Arts, Art Omi, Hedgebrook, Tin House, and the Barbara Deming Memorial Fund, among others. Tsering was born and raised in Nepal, and has since lived in Vancouver, Toronto, and New York City

About Shruti Swamy
Shruti Swamy is the author of the story collection A House Is a Body,  and a novel, The Archer, both from Algonquin Books. The winner of two O. Henry Awards, her work has appeared in The Paris Review, McSweeny's, and AFAR Magazine. She is the recipient of a Creative Writing Fellowship from the National Endowment for the Arts, as well as grants from the Elizabeth George Foundation, the San Francisco Arts Council, and Vassar College. She is a Kundiman Fiction Fellow, and lives in San Francisco.

We Measure the Earth with Our Bodies (Hardcover)

International Bestseller
Named a Most Anticipated Book by:
The Millions * Ms. Magazine * Bustle * Glamour
For readers of Homegoing and The Leavers, a compelling and profound debut novel about a Tibetan family's journey through exile.

“Set in 1970s Bombay, the novel explores art, ambition, gender roles and class with the same shimmering prose of Swamy’s first book, the story collection A House Is a Body.”
—San Francisco Chronicle

“[A] sublime, boundary-pushing exploration of sexuality, creativity, and love.”
—NPR
&