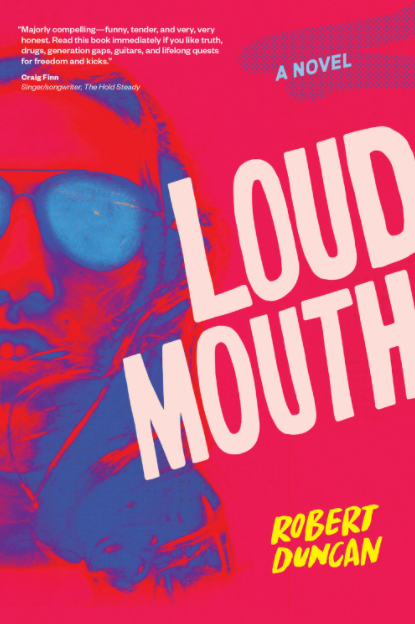 Three Rooms Press and Green Apple Books
present the Official West Coast Launch for LOUDMOUTH, a novel, featuring reading, discussion, and music by author Robert Duncan, former editor of Creem magazine, plus special guest Gary Wilson, experimental musician and performance artist.
The event will be held via livestream to YouTube and Facebook on Tuesday, October 6, 7 pm Pacific.
The event will be hosted by Three Rooms Press co-director Peter Carlaftes.
Tune in at the link below
https://m.youtube.com/watch?v=H3XQ-hOXqR8

In 1970s New York City, Thomas Ransom dreams that rock ’n’ roll will be his ticket out of the life his conservative family planned for him, and he takes it to the extreme: burning bridges and houses on the way to discovering his true destiny.
Thomas Ransom, born to a severely dysfunctional southern family transplanted to New York City, is left to his own devices by neglectful parents, and spends his childhood shadowing his criminally-inclined half-brother and roaming the city with hard-drinking teenage pals. He eventually finds an outlet as the flamboyant singer of a downtown rock band, and later as the young editor of the Detroit-based magazine that invented punk, only to return to New York, at the height of the 1970s bacchanal, and crash. But it isn’t music that saves him. It’s a soft-spoken painter, who turns out to be the most outrageous character of all. With echoes of Almost Famous and Just Kids, LOUDMOUTH tracks an impassioned musician and writer out among the punks, hippies, and wild geniuses of rock when music was the center of the world.

Robert Duncan is author of The Noise: Notes from a Rock 'n' Roll Era, an exploration of pop and society in the Seventies, Kiss, a satirical biography of the band, and Only the Good Die Young, profiles of dead rock stars. He was a writer for Creem, before becoming, at 22, managing editor of the magazine, working alongside his friend Lester Bangs, and he has contributed to Rolling Stone, Circus, Life, and dozens of other publications. He is anthologized in the book Springsteen on Springsteen and archived in rocksbackpages.com. He was story consultant, as well as interview subject and voiceover, for the 2019 documentary, Boy Howdy: The Creem Magazine Story and appears in public TV's Ticket to Write, a documentary about the "Golden Age of Rock Music Journalism." He has worked as a singer, songwriter and producer, and is founder of the 29-year-old ad agency Duncan Channon, with offices in San Francisco, LA and Brooklyn. He was born in Sheboygan, Wisconsin, but comes from a Southern family, and grew up mostly in New York. His great-grandfather, as editor of the Memphis Commercial-Appeal, won the Pulitzer Prize for editorials against the Klan. He currently lives with his wife, the artist and rock photographer Roni Hoffman, in Fairfax, California. Loudmouth is Duncan's first novel.

Gary Wilson emerged from New York's DIY movement with 1977's proto-New Wave masterpiece You Think You Really Know Me, an extraordinary record which has been known to suck unprepared new listeners in like a drug and never let go. Shortly after its limited release its creator simply vanished. In the 25-year wake before he was found again, Gary's small-town opus had spread by word-of-mouth and indie radio to inspire a whole new generation of musicians and producers with his bizarre songs and personal musical vision. His cult following includes Beck, who shouts him out in "Where It's At (Two Turntables And A Microphone)", The Roots’ ?uestlove, Simpsons creator Matt Groening, and of course, Stones Throw’s Peanut Butter Wolf. The re-release You Think You Really Know Me in 2002 won him accolades in The New York Times and culminated in sold-out shows in New York and Los Angeles. Gary Wilson has continued making music in the years following his "disappearance." His re-emergence in the world coincided with his 2004 release on Stones Throw titled Mary Had Brown Hair.

"Read this book immediately if you like truth, drugs, generation gaps, guitars, and lifelong quests for freedom and kicks." --Craig Finn, The Hold Steady