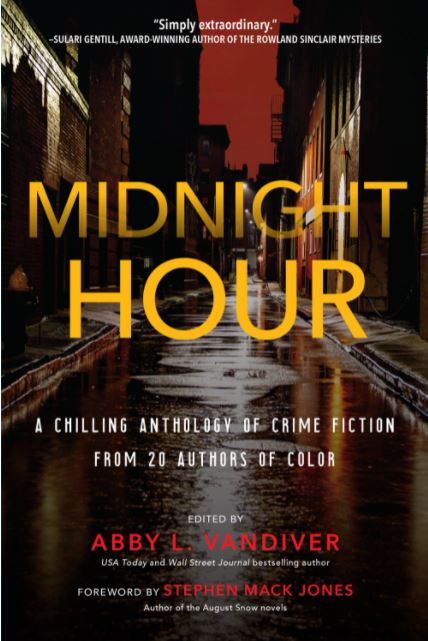 Join us on Tuesday, November 23 at 6pm PT for a reading celebrating Midnight Hour: A Chilling Anthology of Crime Fiction from 20 Authors of Color on Zoom!

Praise for Midnight Hour
“[A] wonderful all-original anthology…Full of varied voices, this volume is a must read for mystery aficionados.”—Publishers Weekly, starred review

“An excellent collection of stories told from many different viewpoints.”—Kirkus Reviews

“Midnight Hour is an absorbing anthology that exhibits the range and talent of some of crime fiction’s most interesting writers. Full of vim and intrigue, fun and horror, these stories explore the suspenseful possibilities of trouble at midnight.”—Steph Cha, award-winning author of Your House Will Pay

About the Contributors
H.C. Chan, also known as Vera Chan, makes her fiction debut in MIDNIGHT HOUR. A former lifestyles/A&E reporter/editor in Bay Area newspapers, magazines and online, Vera has worked at the world's biggest online destinations (Yahoo and Microsoft). She is represented by the Jennifer de Chiara Agency. Her unpublished humor novel, THE MOUNTED POSITION, came in second in the Women’s National Book Association SF Chapter’s fiction category awards. An early draft of her mystery, FOLLOWING, won the Sisters in Crime Eleanor Taylor Bland award for a mystery-in-progress from a writer of color.

Jennifer J. Chow is the Lefty Award-nominated author of the Sassy Cat Mysteries and the forthcoming Night Market Mysteries (Berkley/Penguin Random House). The first in the Sassy Cat series, Mimi Lee Gets A Clue, was selected as an Overdrive Recommended Read, a PopSugar Best Summer Beach Read, and one of BuzzFeed’s Top 5 Books by AAPI authors. Her upcoming Mimi Lee Cracks the Code was listed in BookRiot's Best Upcoming Cozy Mysteries for the Second Half of 2021. She’s active in Sisters in Crime, Crime Writers of Color, and Mystery Writers of America. Connect with her online at www.jenniferjchow.com.

Tracy Clark, a native Chicagoan, is the author of the award-winning Cass Raines Chicago Mystery series, featuring ex-cop turned PI Cassandra Raines. A multi-nominated Anthony, Lefty and Shamus Award finalist, she is also the 2020 winner of the G.P. Putnam’s Sons Sue Grafton Memorial Award. Tracy is a member of Crime Writers of Color, Mystery Writers of America and Sisters in Crime and currently serves on the boards of her local MWA and SinC chapters, as well as the Bouchercon national board. Her fourth Cass Raines novel, RUNNER, released in June 2021. Her debut, BROKEN PLACES, made Library Journal’s list of the Best Crime Fiction of 2018 and was short listed in the mystery category on the American Library Association’s 2019 Reading List. CrimeReads also named Cass Raines Best New PI of 2018. The novel was nominated for a Lefty Award for Best Debut Novel, an Anthony Award for Best Debut Novel and a Shamus Award for Best First PI Novel. Her second Raines novel, BORROWED TIME, was nominated for the 2020 Lefty Award for Best Mystery Novel and won the 2020 G.P. Putnam’s Sons Sue Grafton Memorial Award. WHAT YOU DON’T SEE, book three in the series, was nominated for the 2021 Lefty and Shamus Awards. When not writing, she’s watching old black-and-white movies, reading, or just puttering around. She roots for the Cubs, the Sox, the Bears, the Blackhawks, the Chicago Sky and the Chicago Fire equally. As a proud Chicagoan, it’s deep dish and hot dogs, no ketchup. Vegan schmegan. And she can toss a (fictional) dead body anywhere and make it work. Dare her.

Delia C. Pitts is the author of a contemporary noir mystery series. The fifth novel in this private eye series, Murder My Past, was published in February 2021. Her short story, "The Killer," was selected for inclusion in Best American Mystery and Suspense 2021. After earning a Ph.D. in history from the University of Chicago, she worked as a university administrator and U.S. diplomat. She lives with her husband in central New Jersey and is an active member of Sisters in Crime and Crime Writers of Color. Learn more about Delia at her website, deliapitts.com. Her next mystery, Murder Take Two, will be published in 2022.

David Heska Wanbli Weiden, an enrolled citizen of the Sicangu Lakota Nation, is the author of Winter Counts, nominated for an Edgar Award, and winner of the Anthony, Thriller, Lefty, Barry, Macavity, and Spur Awards. The novel was a New York Times Editors’ Choice, an Indie Next pick, main selection of the Book of the Month Club, and named a Best Book of 2020 by NPR, Amazon, Publishers Weekly, Library Journal, and other magazines. He lives in Denver, Colorado, with his family.

Wall Street Journal and USA Today bestselling author, Abby L. Vandiver, who also writes as Abby Collette, has always enjoyed writing, combining that with her gift for telling stories and love of mystery she became an author. A hybrid, she has written as an indie as well as a traditionally published author. Abby has penned more than twenty-five books and short stories. Abby writes cozy mysteries with Penguin Berkley including A Deadly Inside Scoop and A Game of Cones in the Ice Cream Parlor Mystery series. Abby resides in South Euclid, Ohio and enjoys spending time with her grandchildren and facilitating self-publishing and writing craft classes at her local library.

Midnight Hour: A chilling anthology of crime fiction from 20 authors of color (Paperback)

From a simple robbery gone horribly wrong to a grisly murder in a secret love dungeon, this stellar collection of crime fiction short stories showcases some of today's finest voices of color.