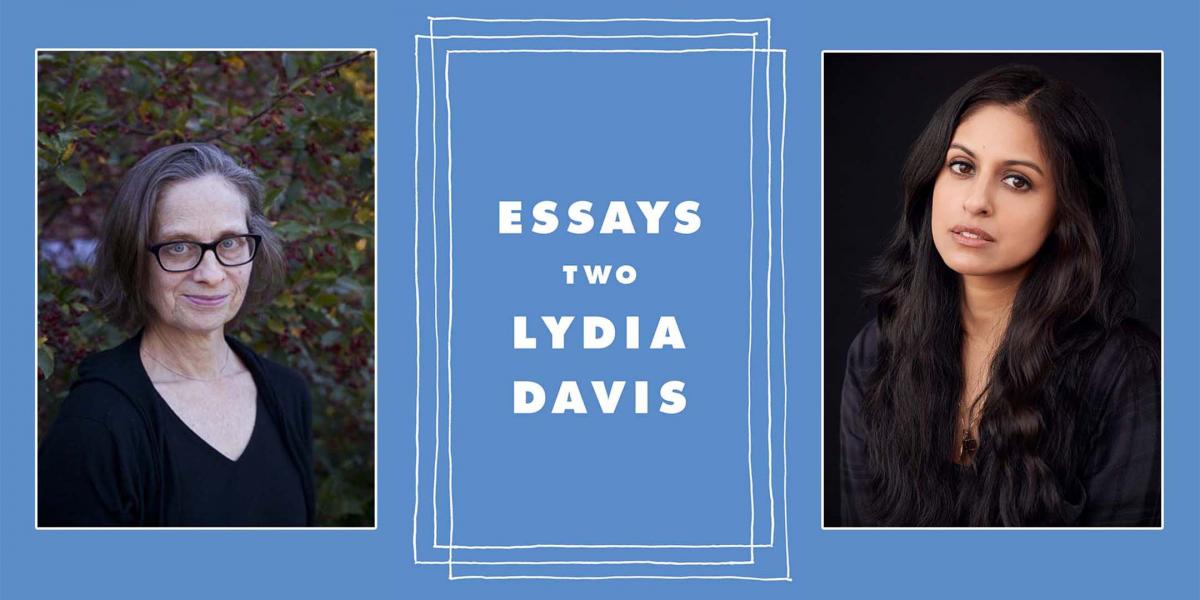 Join us on Tuesday, November 30 at 4pm PT when Lydia Davis discusses Essays Two with Parul Sehgal on Zoom!
Introduction by Jonathan Galassi

Please note this is a ticketed event.
Tickets are available here.

About the Event
Join us on November 30 for a special launch event for the new nonfiction collection from Lydia Davis—Essays Two: On Proust, Translation, Foreign Languages, and the City of Arles—hosted by Community Bookstore, Politics and Prose Bookstore, Harvard Book Store, Seminary Co-op Bookstores, the Elliott Bay Book Company, and Green Apple Books.

Lydia Davis will be in conversation with Parul Sehgal, a staff writer at The New Yorker and formerly a book critic at The New York Times, with an introduction provided by Jonathan Galassi, her longtime editor and President of Farrar, Straus and Giroux.

About Essays Two
In Essays One, Lydia Davis, who has been called “a magician of self-consciousness” by Jonathan Franzen and “the best prose stylist in America” by Rick Moody, gathered a generous selection of her essays about best writing practices, representations of Jesus, early tourist photographs, and much more. Essays Two collects Davis’s writings and talks on her second profession: the art of translation. The award-winning translator from the French reflects on her experience translating Proust (“A work of creation in its own right.” —Claire Messud, Newsday), Madame Bovary (“[Flaubert’s] masterwork has been given the English translation it deserves.” —Kathryn Harrison, The New York Times Book Review), and Michel Leiris (“Magnificent.” —Tim Watson, Public Books). She also makes an extended visit to the French city of Arles, and writes about the varied adventures of learning Norwegian, Dutch, and Spanish through reading and translation.

Davis, a 2003 MacArthur Fellow and the winner of the 2013 Man Booker International Prize for her fiction, here focuses her unique intelligence and idiosyncratic ways of understanding on the endlessly complex relations between languages. Together with Essays One, this provocative and delightful volume cements her status as one of our most original and beguiling writers.

About the Writers
Lydia Davis is the author of Essays One, a collection of essays on writing, reading, art, memory, and the Bible. She is also the author of The End of the Story: A Novel and many story collections, including Varieties of Disturbance, a finalist for the 2007 National Book Award for Fiction; Can’t and Won’t (2014); and The Collected Stories of Lydia Davis, described by James Wood in The New Yorker as “a grand cumulative achievement.” Davis is also the acclaimed translator of Swann’s Way and Madame Bovary, both awarded the French-American Foundation Translation Prize, and of many other works of literature. She has been named both a Chevalier and an Officier of the Order of Arts and Letters by the French government, and in 2020 she received the PEN/Malamud Award for Excellence in the Short Story.

Parul Sehgal is a staff writer at The New Yorker. Previously, she was a book critic at the New York Times, where she also worked as a senior editor and columnist. She has won awards from the New York Press Club and the National Book Critics Circle for her criticism. She teaches in the graduate creative-writing program at New York University.

Please note this is a ticketed event.
Tickets are available here.