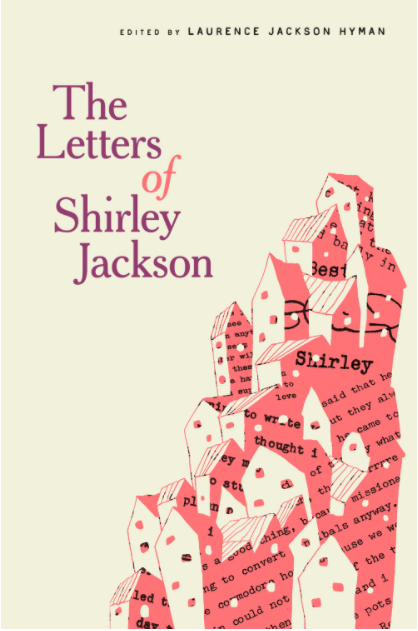 Join us on Wednesday, July 14 at 6pm PT when Laurence Jackson Hyman and Bernice Murphy join us to discuss their work on The Letters of Shirley Jackson with Jonathan Lethem on Zoom!

Zoom Registration
Please click the link below to join the webinar:
https://us02web.zoom.us/webinar/register/WN_aPl7NWssT6uTdGlFwZKo2A

Praise for The Letters of Shirley Jackson
“The letters generously collected here brim with energy—they sear us with their candor and ferocity. This biography-through-letters gives an intimate and warm voice to the imagination behind the treasury of uncanny tales that is Shirley Jackson’s legacy.”—Joyce Carol Oates

“The breadth of Shirley Jackson’s artistry is still being recognized. This intimate collection of her correspondence makes us feel the odds against which this working mother, daughter, and wife accomplished what she did, and at what costs. This book is surely as much a feminist document as a literary one.”—Jonathan Lethem

“The Letters of Shirley Jackson offers so much more than a simple peek behind the curtain of one of the most important literary lives of the twentieth century. Her letters are full of warmth and insight while displaying her uncompromising wit and talent, as well as a melancholic, haunted vulnerability…. A book to be cherished and reread.”—Paul Tremblay

About The Letters of Shirley Jackson
This bewitching collection of never-before-published letters from the renowned author of “The Lottery” and The Haunting of Hill House brilliantly draws out flashes of the uncanny in the domestic, sparks of horror in the quotidian, and the veins of humor that run through good times and bad.

Shirley Jackson is one of the most important American authors of the last hundred years and among our greatest writers of the female experience. This extraordinary compilation of personal correspondence has all the hallmarks of Jackson’s beloved fiction, and also features Shirley’s own witty line drawings.

I must stop writing letters and get to writing a novel. If you think of any good scenes for a novel covering about forty pages send them right along. I can use anything I can get.

Written over the course of nearly three decades, from Jackson’s college years to six days before her early death at the age of forty-eight, these letters become the autobiography Shirley Jackson never wrote, full of subversive wit, vivid imagination, and precisely calibrated prose. As well as being a bestselling author, Jackson spent much of her adult life as a mother of four in Vermont, and the landscape here is often the everyday: dream vacations and trips to the dentist; overdue taxes and frayed lines of Christmas lights; new dogs and new babies. But in recounting these events to family, friends, and colleagues, she turns them into remarkable stories: entertaining, revealing, and wise. At the same time, many of these letters provide fresh insight into the genesis and progress of Jackson’s writing over nearly three decades.

The novel is getting sadder. I suppose it’s because of a general melancholy, but a general air of disaster is slowly settling over Hill House. It’s always such a strange feeling—I know something’s going to happen, and those poor people in the book don’t; they just go blithely on their ways.

This intimate collection holds the beguiling prism of Shirley Jackson—writer and teacher, mother and daughter, neighbor and wife—up to the light.

About the Contributors
Shirley Jackson was born in San Francisco in 1916. She first received wide critical acclaim for her short story “The Lottery,” which was published in The New Yorker in 1948. She is the author of six novels, including The Haunting of Hill House and We Have Always Lived in the Castle, two works of nonfiction, Life Among the Savages and Raising Demons, and hundreds of short stories. She died in 1965.

Laurence Jackson Hyman (editor), the eldest child of Shirley Jackson and Stanley Edgar Hyman, has spent most of his professional life in publishing as a writer, photographer, editor, art director, and publisher. He is the author, editor, or co-editor of dozens of books and monographs, including two posthumous collections of Jackson’s stories: Just an Ordinary Day and Let Me Tell You.

Bernice M. Murphy (academic consultant) is an associate professor/lecturer in popular literature at the School of English, Trinity College Dublin, Ireland. She edited the collection Shirley Jackson: Essays on the Literary Legacy and has written several articles and book chapters on Jackson’s writing. She is also an expert on American horror and Gothic narratives. Her current work in progress is a monograph entitled California Gothic.

The Letters of Shirley Jackson (Hardcover)

By Shirley Jackson, Laurence Jackson Hyman (Editor), Bernice M. Murphy (Contributions by)
$35.00
ISBN: 9780593134641
Availability: ON HAND in at least ONE of our stores. Click through or call for up-to-the-minute availability.
Published: Random House - July 13th, 2021

“This biography-through-letters gives an intimate and warm voice to the imagination behind the treasury of uncanny tales that is Shirley Jackson’s legacy.”—Joyce Carol Oates

Let Me Tell You: New Stories, Essays, and Other Writings (Paperback)

NAMED ONE OF THE BEST BOOKS OF THE YEAR BY NPR • From the renowned author of “The Lottery” and The Haunting of Hill House, a spectacular new volume of previously unpublished and uncollected stories, essays, and other writings.

The Arrest: A Novel (Hardcover)

From the award-winning author of The Feral Detective and Motherless Brooklyn comes an utterly original post-collapse yarn about two siblings, the man that came between them, and a nuclear-powered super car.