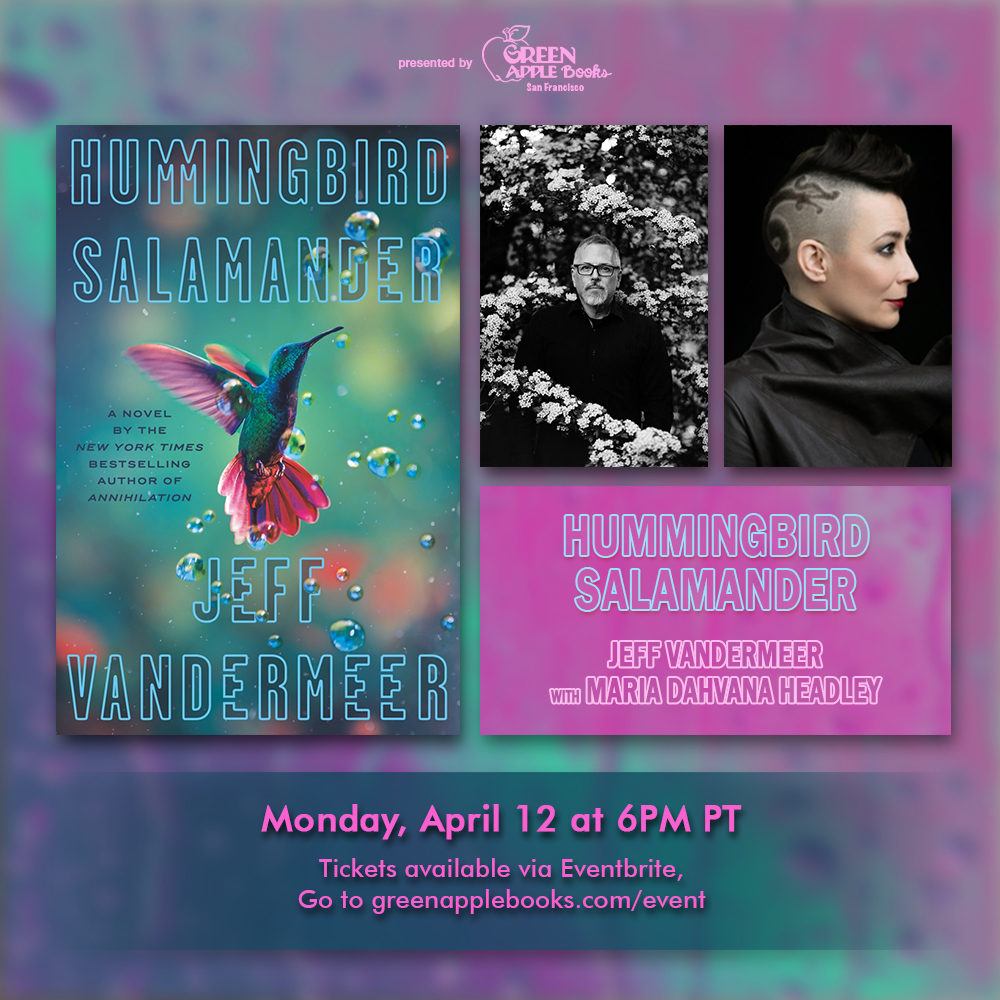 Join us on Monday, April 12 at 6pm PT when Jeff VanderMeer joins us for the release of his latest novel, Hummingbird Salamander, with Maria Dahvana Headley!

PLEASE NOTE THIS IS A TICKETED EVENT

Jeff VanderMeer, beloved author of the Southern Reach Trilogy, Borne, and Dead Astronauts, joins us virtually to read from and discuss his latest book, Hummingbird Salamander, with The Mere Wife author and Beowulf translator Maria Dahvana Headley. An event with Jeff Vandermeer is always an experience, and we know this will be no exception. There will be an opportunity to win Hummingbird Salamander prizes! Spots are limited, so sign up today.

Tickets include a signed copy of Hummingbird Salamander, access to the Zoom event, and entry to an exclusive VanderMeer fan site.
Admission only tickets are available and limited.

"Hummingbird Salamander is harrowing, gripping, and profound. It's both a thriller and a requiem for a disappearing world. I expect this novel will haunt me for a long time." —Emily St. John Mandel

"VanderMeer moves from fantasy into noir territory with this version of an eco-thriller. . .Jane has a number of things in common with Stieg Larsson’s heroine: She can pound most dudes into tapioca, and she’s pretty handy with a gun and a computer, too. . .It wouldn’t be a VanderMeer story, no matter what the genre, without a post-apocalyptic turn, and after all the assorted villains (one of them in particular very evil indeed) and oversized amphibians and mad-scientist taxidermists and exploding heads, it’s sort of nice to get to a future that no one will survive—one that strongly resembles 2020, for that matter. A daring change of genres, and an entertaining whirlwind at that."—Kirkus Reviews (starred review)

“Hummingbird Salamander is a profound and incendiary thriller hurtling backward from the end of the world. Jeff VanderMeer’s tale of ecological and personal obsession inhabits that strange, surreal space where the natural world and human ambition collide – a space almost no other writer has chronicled with as much reverence and imaginative lucidity. The result is a detective story unlike any I’ve read before, futuristic in bearing but deeply relevant to this present, dangerous moment.” —Omar El Akkad, award-winning journalist and author of American War

From the author of Annihilation, a brilliant speculative thriller of dark conspiracy, endangered species, and the end of all things

Software manager Jane Smith receives an envelope containing a list of animals along with a key to a storage unit that holds a taxidermied hummingbird and salamander. The list is signed “Love, Silvina.” Jane does not know a Silvina, and she wants nothing to do with the taxidermied animals.

The hummingbird and the salamander are, it turns out, two of the most endangered species in the world. Silvina Vilcapampa, the woman who left the note, is a reputed ecoterrorist and the daughter of a recently deceased Argentine industrialist. By removing the hummingbird and the salamander from the storage unit, Jane has set in motion a series of events over which she has no control.

Instantly, Jane and her family are in danger, and she finds herself alone and on the run from both Silvina’s family and her ecoterrorist accomplices—along with the wildlife traffickers responsible for the strange taxidermy. She seems fated to follow in Silvina’s footsteps as she desperately seeks answers about why Silvina contacted her, why she is now at the center of this global conspiracy, and what exactly Silvina was planning. Time is running out—for her and possibly for the world.

Hummingbird Salamander is the Annihilation author Jeff VanderMeer at his brilliant, cinematic best, wrapping profound questions about climate change, identity, and the world we live in into a tightly plotted thriller full of unexpected twists and elaborate conspiracy.