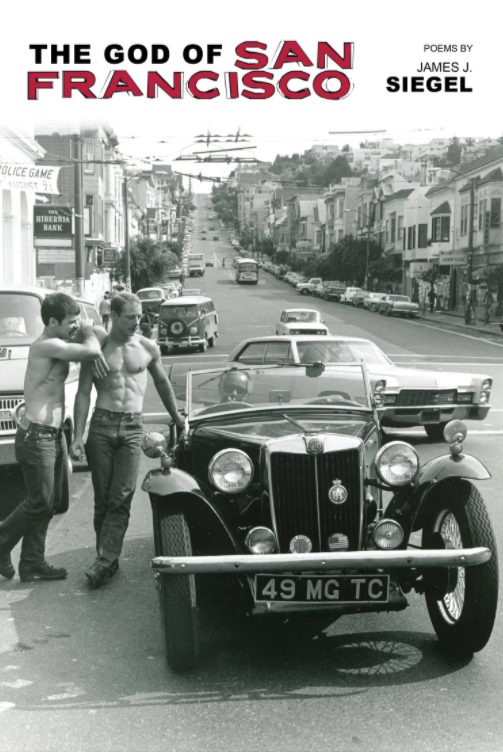 Join us on Wednesday, January 20 at 6pm PT when James J. Siegel, Ben Kline, and Caroline Earleywine read from their work to celebrate Siegel's latest collection, The God of San Francisco, on Zoom!

Praise for The God of San Francisco

"James Siegel’s The God of San Francisco is one man’s spiritual journey through a city marked by violence, queer history, and the legacy of AIDS. Nothing escapes his attention, not the vanished Castro Funeral Home, not the “pale, bony torsos” sunning in Dolores Park. Here, history is a landscape where loss meets redemption. Ultimately, Siegel’s keen eye renders the sometimes painful, hard-fought ways we travel far from where we begin; these poems are as vivid and heartfelt as the world they map."—Bruce Snider, author of Fruit and Paradise, Indiana

"The first time I met James Siegel I went to his reading series. I was curious because we hadn't met and I know many of the poets in San Francisco. We're reasonably close neighbors, in a place where some no longer think that there are such things as neighbors. The reading was impressive, as is the poet. Having now read The God of San Francisco I wonder if we aren't differently aged versions of a similar child. James Siegel's poems made me cry in deep and healing sobs and in a rhythm of clicking heels and rosaries. My family has lived for five generations in the Castro and I'm a bit possessive of those streets, but Siegel's clean, accessible and loving translations of spaces to words made me feel at home. This collection goes far beyond the rainbow crosswalks and renamed businesses. This should be required reading for people who think they know."—Kim Shuck, 7th Poet Laureate of San Francisco

"James Siegel’s The God of San Francisco reminds us that 'this is where life ended/ but went on for those left behind'—a post-apocalyptic universe like HBO’s The Leftovers where one person’s heaven is another person’s hell. I am reminded of being a young, queer Latinx boy who dreamt of living in San Francisco, a city whose cultural and political history is entwined in the daily lives of its people. These poems are about a poet’s love for a city whose mythology continues to live. We tread survivor’s guilt, communal history, and its trauma, yes, but these are love poems. The God of San Francisco is Siegel’s love story of a city and its people."—Ruben Quesada, author of Revelations

About The God of San Francisco

In The God of San Francisco, James J. Siegel examines queer grief during the onset of the AIDS crisis through a lavender-and-leather pantheon: St. Christopher, Allah, and the God of San Francisco transubstantiate a sarcoma’s cicatrix into sequins, a viral dowry into a benevolent plume of dazzling feathers. From Laramie, Wyoming, to Toledo, Ohio, Siegel performs a magisterial frilling of historical attention, always emerging as “an extraordinary conflagration. A beautiful immolation.” At once an elegiac columbarium and search-and-rescue map for future bliss, The God of San Francisco trills from the Castro Funeral Home to North Beach and back, surmising death as something honeyed and lissome, “eulogies eulogized.” Desire masquerades as “a raven gliding / on the backdrop of midnight” and “Jesus in fishnets, / crossdressing his way through Nazareth,” and desire cedes each poem’s boy, spectral or otherwise, a warm hand, green grass, “the sun’s rays on our skin.”

The God of San Francisco (Paperback)

In The God of San Francisco, James J. Siegel examines queer grief during the onset of the AIDS crisis through a lavender-and-leather pantheon: St. Christopher, Allah, and the God of San Francisco transubstantiate a sarcoma's cicatrix into sequins, a viral dowry into a benevolent plume of dazzling feathers.