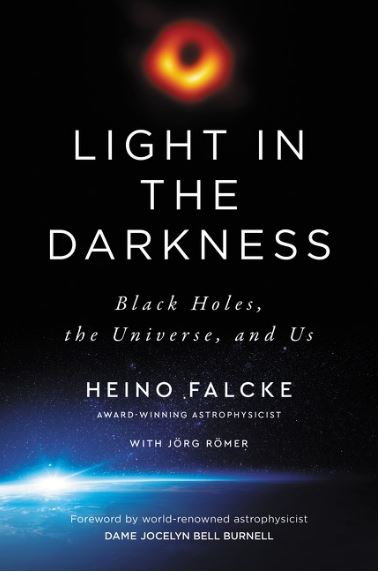 Join us on Saturday, June 26 at 12pm PT when Heino Falcke is joined by Kate Greene to discuss his book, Light in the Darkness: Black Holes, the Universe, and Us, on Zoom!

About Light in the Darkness
A fascinating and thought-provoking investigation into the nature of black holes—a blend of the spiritual, the philosophical, and the scientific—from the premier German astrophysicist who made history in 2018, capturing the first one on film.

A Light in the Darkness is the story of one of the greatest astronomical achievements of all time: the first photographic evidence of black holes in April 2018, and its significance for humanity, told by the scientist who accomplished it. A man of faith ordained in the Protestant tradition, Heino Falcke wrestles with the ways in which black holes force us to confront the boundary where human life ends and the celestial begins. He also ponders why black holes are difficult for most of us to understand—comparing it to our inability to envisage our own inevitable death.

Black holes develop in outer space when a massive star dies, and its matter is condensed. That extreme amount of mass contained in a small space generates a gigantic amount of gravitational force, allowing the black hole to suck up everything that comes near, including light. These astronomical wonders are the subject of our greatest scientific and philosophical theorizing—the journey to a black hole would be the journey to the end of time itself. In this way, Falcke regards them as the most exquisite representations of fear, death . . . and, surprisingly, the divine.

Empirical and profound, A Light in the Darkness is the first work to examine both the physical nature and spiritual meaning of black holes, those astrophysical mysteries Falcke, calls “the epitome of merciless destruction.”

About Heino Falcke
Heino Falcke is a German professor of radio astronomy and astroparticle physics at the Radboud University Nijmegen. He was a winner of the 2011 Spinoza Prize. His main field of study is black holes. He lives in Berlin.

Light in the Darkness: Black Holes, the Universe, and Us (Hardcover)

Once Upon a Time I Lived on Mars: Space, Exploration, and Life on Earth (Paperback)

Once Upon a Time I Lived on Mars is an essay collection, inspired by the author's four-month stay inside a simulated Martian habitat.

When it comes to Mars, the focus is often on how to get there: the rockets, the engines, the fuel. But upon arrival, what will it actually be like?