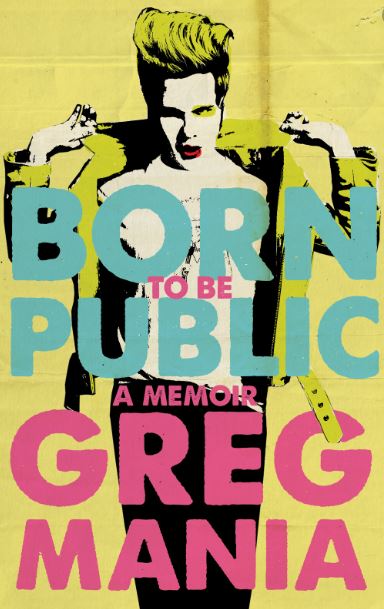 Join us on Tuesday, September 8 at 6pm PST when Greg Mania discusses his new memoir, Born to Be Public, with Sam Lansky on Zoom

About Born to Be Public

In this unique and hilarious debut memoir, writer and comedian Greg Mania chronicles life as a "pariah prodigy." From inadvertently coming out to his Polish immigrant parents, to immersing himself in the world of New York City nightlife, and finding himself and his voice in comedy. Born to Be Public is a vulnerable and poignant exploration of identity (and the rediscovery of it), mental health, sex and relationships, all while pursuing a passion with victories and tragicomic blunders. At once raw and relatable, Mania's one-of-a-kind voice will make you shed tears from laughter and find its way into your heart.

Praise for Born to Be Public

"Greg Mania is the Cheesecake Factory of writers, and I say that with the utmost reverence: extravagant, unapologetic, hilarious, and fucking good."

- Lindy West, author of Shrill and The Witches Are Coming

"This book is a hilarious wonder. Not only does it prove that Greg Mania was, indeed, born to be a public (and beloved) icon, but also that he was born to be a celebrated writer. It's sheer delight."

- Alissa Nutting, author of Tampa and Made for Love

Greg Mania is a writer, comedian, and award-winning screenwriter based in New York City. His words have been published in Vanity Fair, O, The Oprah Magazine, PAPER, Out, BOMB, The Millions, Electric Literature, The Rumpus, HuffPost, among other international online and print platforms. His debut memoir, Born to Be Public, will be published by CLASH Books this summer.

In film and TV, he has recently co-wrote and co-produced his first feature-length film, Deadman’s Barstool, which is currently available to stream on Amazon Prime Video. His pilot script, MANIA, has just won the Grand Prize of the Fourth Annual Stage 32 Comedy Writing Contest. He has also been named the Overall Winner of the Third Annual Filmmatic Screenplay Awards and Second Place Winner at WILLiFEST, was nominated for Best Script at the Ninth Annual New Media Film Festival in Los Angeles and the Palm Springs International Comedy Festival, and, as of writing this, has also been named an official selection in comedy festivals and competitions in Austin, Portland, and Atlanta.

Please don’t let all these fancy awards and nominations fool you, he’s still on a family plan.

Born to Be Public (Hardcover)

In this unique and hilarious debut memoir, writer and comedian Greg Mania chronicles life as a pariah prodigy. From inadvertently coming out to his Polish immigrant parents, to immersing himself in the world of New York City nightlife, and finding himself and his voice in comedy.

ONE OF THE MOST ANTICIPATED BOOKS OF THE YEAR