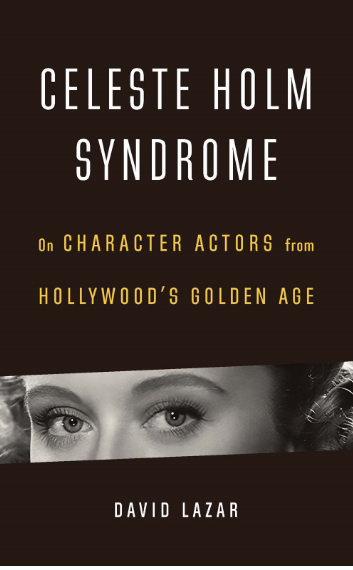 Join us on Tuesday, October 27 at 7pm PDT when David Lazar discusses his book Celeste Holm Syndrome: On Character Actors from Hollywood's Golden Age with Joanna Eleftheriou on Zoom!

In this essay collection David Lazar looks to our intimate relationships with characters, both well-known and lesser known, from Hollywood’s Golden Age. Veering through considerations of melancholy and wit, sexuality and gender, and the surrealism of comedies of the self in an uncanny world, mixed with his own autobiographical reflections of cinephilia, Lazar creates an alluring hybrid of essay forms as he moves through the movies in his mind. Character actors from the classical era of the 1930s through the 1950s including Thelma Ritter, Oscar Levant, Martin Balsam, Nina Foch, Elizabeth Wilson, Eric Blore, Edward Everett Horton, and the eponymous Celeste Holm all make appearances in these considerations of how essential character actors were, and remain, to cinema.

"Well-observed reflections for true fans of the silver screen."—Kirkus Reviews

"Fans of Hollywood’s Golden Age will delight in this affecting look at what makes actors truly memorable, even if they’re not in the spotlight."—Publishers Weekly

“A great book about character actors would be enough, but Lazar’s imaginative and ingratiatingly erudite series of meditations is much more. The author spins sprightly essays from each subject, allowing biography and personal speculation to reinforce and enrich each other. The sublime tribute to Oscar Levant and melancholia is, as they say, worth the price of admission.”—Molly Haskell, author of From Reverence to Rape: The Treatment of Women in the Movies

In this essay collection David Lazar looks to our intimate relationships with characters, both well-known and lesser known, from Hollywood’s Golden Age.

This Way Back (In Place) (Paperback)

Going back to her ancestral homeland, a Greek American girl discovers she is a lesbian in love with God, so her questions about home and belonging will not be easily answered.

This Way Back dramatizes a childhood split between Queens, New York, and Cyprus, an island na