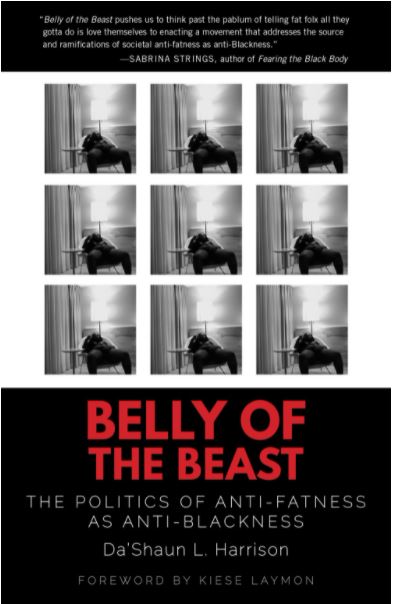 Join us on Wednesday, August 11 at 6pm PT when Da'Shaun L. Harrison discusses their book, Belly of the Beast: The Politics of Anti-Fatness as Anti-Blackness, with Kiese Laymon on Zoom!

Praise for Belly of the Beast
“Belly of the Beast is written with poise and lucidity. It pushes us to think past the pablum of telling fat folx all they gotta do is love themselves to enacting a movement that addresses the source and ramifications of societal anti-fatness as anti-Blackness. Harrison forces us not to look away, reminding us that all too often ‘health’ and ‘desire’ are used to annul Blackness. In a ‘post bo-po’ world, desire and the sheer right to life can be rooted in something other than all the things named non-Black.”
—Sabrina Strings, author of Fearing the Black Body: The Racial Origins of Fat Phobia

“Da’Shaun Harrison is an insightful visionary, world-builder, and ingenious writer who brings us into deeper understandings and frameworks of the intersections of anti-Blackness and anti-fatness. Belly of the Beast brings us closer to ourselves because it brings us closer to the truth—that anti-Blackness
is the foundation to how violence shapes our relationships to our bodies and each other. Harrison not only intervenes in the terror of white supremacist paradigms but develops the tools to imagine and build a new world. Belly of the Beast eats, and it leaves no crumbs.”
—Hunter Shackelford, author of You Might Die for This

“I am continually blown away by Da’Shaun’s ability as a writer to wrestle so deeply and expertly with questions many of us would never even think to ask—whether they be about our world, our politics, our selves, or our bodies. Every page challenges us to expand our imagination and reconstruct the ways we think, talk, and theorize about fatness, Blackness, gender, health, desire, abolition, and more. Belly of the Beast is a gift and a groundbreaker.”
—Sherronda J. Brown, editor-in-chief of Wear Your Voice magazine

About Belly of the Beast
Exploring the intersections of Blackness, gender, fatness, health, and the violence of policing.

To live in a body both fat and Black is to exist at the margins of a society that creates the conditions for anti-fatness as anti-Blackness. Hyper-policed by state and society, passed over for housing and jobs, and derided and misdiagnosed by medical professionals, fat Black people in the United States are subject to sociopolitically sanctioned discrimination, abuse, condescension, and trauma.

Taking on desirability politics, the limitations of gender, the connection between anti-fatness and carcerality, and the incongruity of “health” and “healthiness” for the Black fat, Harrison viscerally and vividly illustrates the myriad harms of anti-fat anti-Blackness. They offer strategies for dismantling denial, unlearning the cultural programming that tells us “fat is bad,” and destroying the world as we know it, so the Black fat can inhabit a place not built on their subjugation.

About Da'Shaun L. Harrison
DA’SHAUN L. HARRISON is a nonbinary abolitionist and community organizer based out of Atlanta, GA. They once served as the Communications Director of #ATLisReady and Editor-in-Chief of Queer Black Millennial. Harrison now holds the honor of being the Associate Editor of Wear Your Voice Magazine and Lead Organizer of Solutions Not Punishment Collaborative (SNaPCo). Harrison has traveled throughout the United States and abroad to lecture at conferences and colleges and to lead workshops focused on race, sexuality, gender, class, religion, (dis)abilities, fatness, and the intersection at which they all meet. You can find them on Twitter and Instagram @DaShaunLH, or through their website, dashaunharrison.com.

Belly of the Beast: The Politics of Anti-Fatness as Anti-Blackness (Paperback)

Exploring the intersections of Blackness, gender, fatness, health, and the violence of policing.

In this powerful, provocative, and universally lau