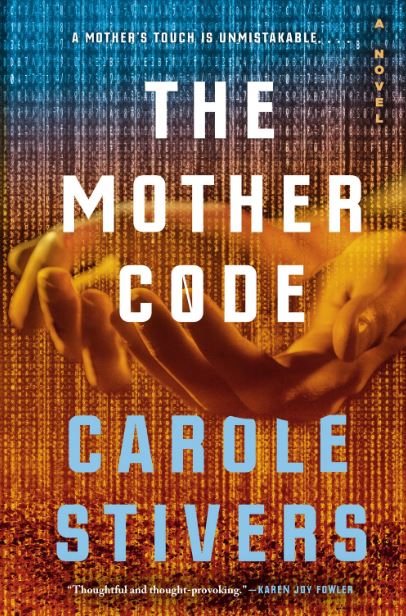 Join us on Thursday, September 3 at 6:00pm PST when Carole Stivers discusses her debut novel, The Mother Code, with John Markoff on Zoom!
Pre-order Carole's book here and receive a signed bookplate!

Praise for The Mother Code

“Carole Stivers is far from the first to wonder if motherhood can be scientifically replicated, but this is a thoughtful and thought-provoking addition to that meditation. An end-of-times tale that focuses less on what has been lost and more on what and who might be saved (and how). Stivers’ wonderful story settles right on the line between human and machine, as blame and threat and rescue and love shift from character to character in surprising and powerful ways.”—Karen Joy Fowler, New York Times bestselling author of We Are All Completely Beside Ourselves

“Some stories are so unique, yet so universal, that it is wonder they aren’t a part of the human fable already. Carole Stivers’s The Mother Code, is such a novel. Simply written but powerful, chock full of ideas and extrapolations about what it means to be a mother and all that such a word implies. Both apocalyptic, yet hopeful, treat yourself to this story. You’ll be well rewarded.”—James Rollins, New York Times bestselling author of Crucible

“I could not put down The Mother Code ! Part action adventure, part sci-fi, the novel is suspenseful and cinematic and such a pleasure to read. Carole Stivers is a masterful storyteller and she has combined science, technology and history to tell a beautiful story of humanity and love.”—Devi S. Laskar, author of The Atlas of Reds and Blues

About The Mother Code

In this mind-bending debut novel, Carole Stivers explores what it means to be a mother in a world that is more chilling and precarious than ever.

It is 2049. When a U.S. attempt at stealth biowarfare goes awry, a team of scientists is engaged to ensure human survival on earth. Their best efforts fail, and they must turn to their last resort: a plan to place genetically engineered children inside the cocoons of large-scale robots—to be incubated, birthed, and raised by these machines, which have been programmed with the latest advances in artificial intelligence: the Mother Code.

Kai is born in America’s desert Southwest, his only companion his robotic Mother, Rho-Z. Equipped with the knowledge and intuition of a human mother, Rho-Z raises Kai and teaches him how to survive. As children like him come of age, their Mothers transform too—in ways that were never predicted. When government survivors decide that the machines who raised the children must be destroyed, Kai must fight to save the only parent he has ever known.

What it means to be human—and a mother—is put to the test in Carole Stivers’s debut novel set in a world that is more chilling and precarious than ever.

Machines of Loving Grace: The Quest for Common Ground Between Humans and Robots (Paperback)

As robots are increasingly integrated into modern society—on the battlefield and the road, in business, education, and health—Pulitzer-Prize-winning New York Times science writer John Markoff searches for an answer to one of the most important questions of our age: will these machines help us, or will they replace us?