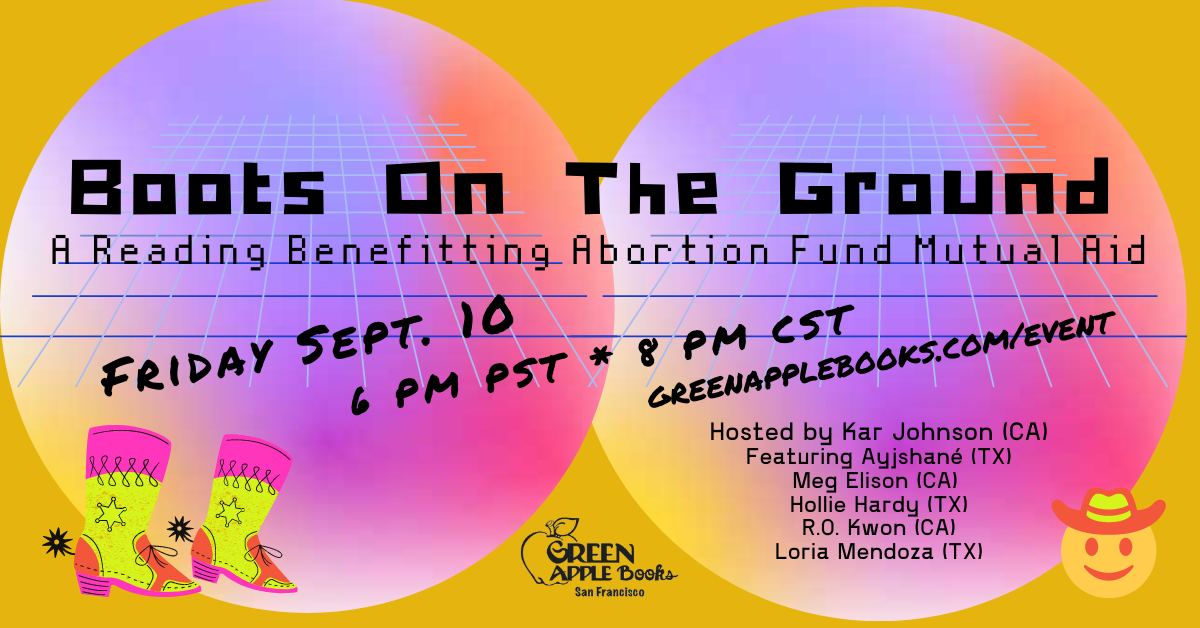 About this Event
Join us this Friday, Sep. 10 at 6pm PT/ 8pm CT for Boots on the Ground, a reading of stellar writers who all say "hell no!" to anti-choice legislation. This is a solidarity reading of writers from both Texas and California.

Why Boots on the Ground? We want to put much-needed funds in the hands of folks with their boots on the ground in the fight for reproductive justice. We will be splitting donations generated from this event between three Texas-based orgs we really believe in, Buckle Bunnies, Fund Texas Choice, and Jane’s Due Process.

Though this is a virtual reading, we encourage our audience to wear boots for the show as a resistant and celebratory act!

While we highly encourage direct donations, Green Apple Books will also donate 10% of all proceeds from books purchased to the three aforementioned orgs. To make sure your order is included, simply write "Boots" or "Boots on the Ground" in your online order comment and we'll handle the rest.

We're all in this together. Thanks for supporting us and one another we'll see you with your boots on!

About the Writers
Julián Delgado Lopera is the author of The New York Times acclaimed novel Fiebre Tropical (Feminist Press 2020), the Winner of the 2021 Ferro Grumley Award and a 2021 Lambda Literary award; a finalist of the 2020 Kirkus Prize in Fiction and the 2021 Aspen Literary Prize. Julián is also the author of Quiéreme (Nomadic Press 2017) and ¡Cuéntamelo! (Aunt Lute 2017) an illustrated bilingual collection of oral histories by LGBT Latinx immigrants which won a 2018 Lambda Literary Award and a 2018 Independent Publisher Book Award. Julián's received fellowships and residencies from Hedgebrook, Headlands Center for The Arts, Brush Creek Foundation of the Arts, Lambda Literary Foundation, Yerba Buena Center for the Arts and The SF Grotto. Their work has been nominated for a Pushcart Prize and has appeared in Granta, Teen Vogue, The Kenyon Review, McSweeney's, The Rumpus, The White Review, LALT, Four Way Review, Broadly, TimeOut Mag to name a few. He is the former executive director of RADAR Productions  a queer literary non-profit in San Francisco.

Meg Elison is a science fiction author and feminist essayist. Her debut, The Book of the Unnamed Midwife, won the 2014 Philip K. Dick award. She is a Hugo, Nebula, and Otherwise awards finalist. In 2020, she published her first collection, “Big Girl” with PM Press, containing the Locus Award-winning novelette, “The Pill.” Elison’s first young adult novel, “Find Layla” was published in 2020 by Skyscape. Her thriller, “Number One Fan,” will be released by Mira Books in 2022. Meg has been published in McSweeney’s, Fantasy & Science Fiction, Fangoria, Uncanny, Lightspeed, Nightmare, and many other places. Elison is a high school dropout and a graduate of UC Berkeley.

Hollie Hardy is an Oakland ex-pat and brand-new Texan, ready to help turn this state blue. She is the author of How to Take a Bullet, And Other Survival Poems (Punk Hostage Press) winner of the Annual Poetry Center Book Award, at San Francisco State University. She holds an MFA in Poetry from SFSU and teaches poetry workshops online at the SF Creative Writing Inst., where she also serves as Poetry Department Chair. Hardy hosts the monthly reading series Saturday Night Special, a Virtual Open Mic, now in its tenth year. Her work has been nominated for a Pushcart Prize and published in numerous literary journals, including MiGoZine, Eleven Eleven, Fourteen Hills, Red Light Lit, sPARKLE & bLink, Dispatches from Quarantine, The Common, Colossus, Parthenon West Review, Samizdat, Transfer, Milvia Street, and others. www.holliehardy.com

R.O. Kwon’s nationally bestselling first novel, The Incendiaries is published by Riverhead (US) and Virago/Little Brown (UK), and it is being translated into seven languages. Named a best book of the year by over forty publications, The Incendiaries received the Housatonic Book Award and was a finalist or nominated for seven other prizes, including the National Book Critics Circle Award for Best First Book and Los Angeles Times First Book Prize. Kwon and Garth Greenwell coedited the nationally bestselling Kink, published by Simon & Schuster (US) and Scribner (UK) and a New York Times Editor’s Choice. Kwon’s writing has appeared in The New York Times, The Guardian, Vanity Fair, The Paris Review, Bookforum, NPR, and elsewhere. She has received fellowships and awards from the National Endowment for the Arts, Yaddo, MacDowell, the Bread Loaf Writers’ Conference, and the Sewanee Writers’ Conference. Born in Seoul, Kwon has lived most of her life in the United States.

Loria Mendoza is a queer Chicanx writer and performance artist from Austin, Texas. They have an MFA in Creative Writing from San Francisco State University and teach writing from creative non-fiction to poetry at POV Studio ATX. They also curate the literary performance series, Red Light Lit Austin for @redlightlit. Their book, Life’s Too Short, won the Michael Rubin Book Award. They hope Greg Abbott has a really terrible day today, and every day.