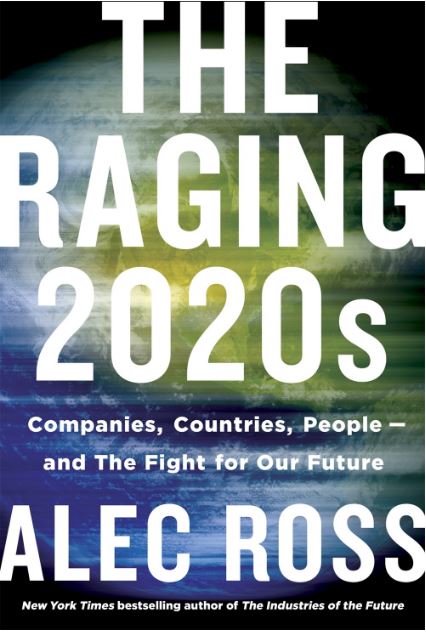 Join us on Tuesday, October 19 at 6pm PT when Alec Ross discusses his book, The Raging 2020s: Companies, Countries, People—and The Fight for Our Future, with Andreas Karelas on Zoom!

About The Raging 2020s
In the face of unprecedented global change, New York Times bestselling author Alec Ross proposes a new social contract to restore the balance of power between government, citizens, and business.

As the market consolidates, the lines between big business and the halls of Congress have become razor-thin. Private companies have become as powerful as countries. As Walter Isaacson said about Alec Ross’s first book, The Industries of the Future, “The future is already hitting us, and Ross shows how it can be exciting rather than frightening.”

Through interviews with the world’s most influential thinkers and stories of corporate activism and malfeasance, government failure and renewal, and innovative economic and political models, Ross proposes a new social contract—one that resets the equilibrium between corporations, the governing, and the governed.

About Alec Ross
Alec Ross is one of the world’s leading experts on innovation. Author of New York Times bestselling The Industries of the Future, he is currently a distinguished visiting professor at the University of Bologna Business School and a board partner at Amplo, a global venture capital firm. He was a distinguished senior fellow at Johns Hopkins University and a senior fellow at the Columbia University School of International and Public Affairs. He served as Senior Advisor for Innovation to the Secretary of State to help modernize the practice of diplomacy and advance America’s foreign policy interests. He began his career as a 6th-grade teacher in Baltimore.

About Andreas Karelas
Andreas Karelas is the founder and executive director of RE-volv, a nonprofit organization that empowers people around the country to help nonprofits in their communities go solar and raise awareness about the benefits of clean energy. He is a dedicated clean-energy advocate with over 15 years of environmental and renewable energy experience. He is an Audubon TogetherGreen Conservation Leadership Fellow and an OpenIDEO Climate Innovator Fellow. He lives and works in San Francisco. Connect with him at re-volv.org and on Twitter at @AndreasKarelas.

The Raging 2020s: Companies, Countries, People - and the Fight for Our Future (Hardcover)

In the face of unprecedented global change, New York Times bestselling author Alec Ross proposes a new social contract to restore the balance of power between government, citizens, and business in The Raging 2020s.

Climate Courage: How Tackling Climate Change Can Build Community, Transform the Economy, and Bridge the Political Divide in America (Paperback)

How Americans can take action in their own communities and unite across the political spectrum in pursuit of solutions to climate change.

Andreas Karelas has a message we don’t often hear: we have all the tools we need to solve the climate crisis and doing so will improve our lives, our economy, and our society.