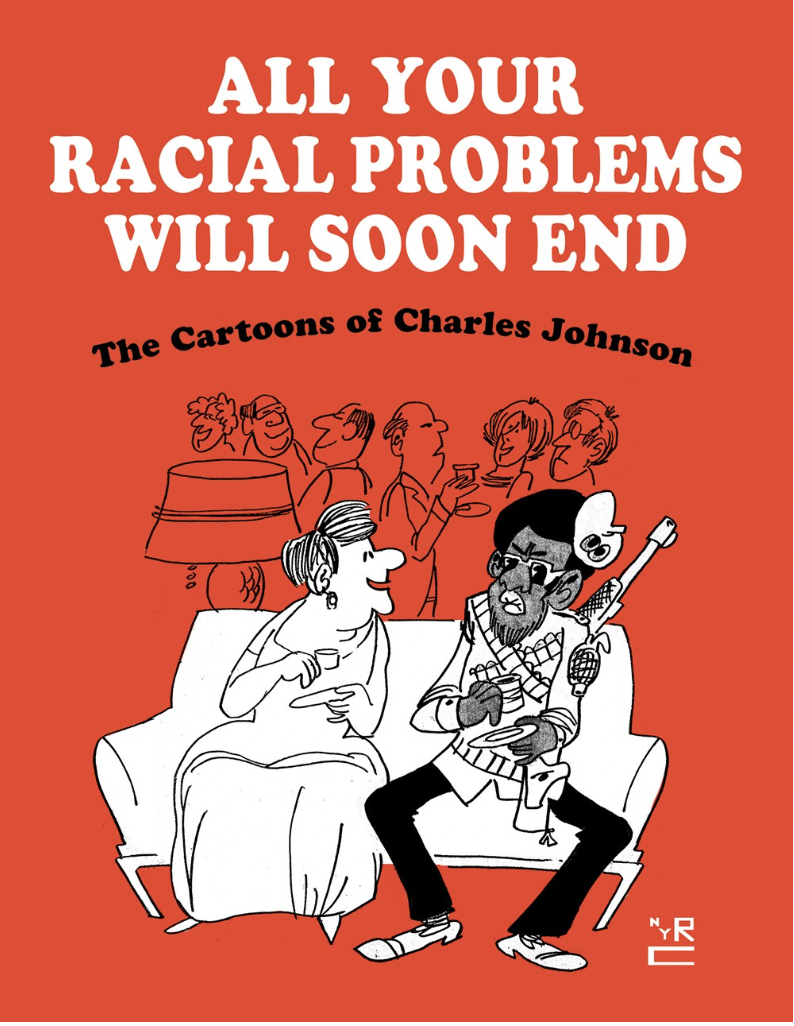 THIS EVENT HAS BEEN POSTPONED. KEEP AN EYE ON THIS SPACE FOR A NEW DATE AND TIME.

Join us on Tuesday, October 18 at 7pm PT when Charles Johnson celebrates the release of his collected comics, All Your Racial Problems Will Soon End, at 9th Ave!

Or watch online by registering at the link below
https://us02web.zoom.us/webinar/register/WN_80Nc6VmZQfuvNOX5FZmvmw

About All Your Racial Problems Will Soon End
Years before he wrote his National Book Award–winning novel Middle Passage, Charles Johnson created these sidesplitting and subversive gag comics about Black life in America, now collected for the first time in nearly half a century.

Before Charles Johnson found fame as a novelist and won the National Book Award for Middle Passage in 1991, he was a cartoonist, and a very good one.

Taught via mail correspondence course by the comics editor Lawrence Lariar, mentored by the New Yorker cartoonist Charles Barsotti, and inspired by the call of poet Amiri Baraka to celebrate and depict Black life in America, Johnson crafted some of the fiercest and funniest cartoons of the twentieth century.

This collection, Johnson’s first in nearly fifty years, brings together work from across his career: college newspaper gags, selections from his books Black Humor and Half-Past Nation Time, his unpublished manuscript Lumps in the Melting Pot, and uncollected pieces. Taken together, this volume reveals Johnson as long overdue for appreciation as a cartoonist of the first order.

About Charles Johnson
Charles Johnson is a novelist, essayist, literary scholar, philosopher, cartoonist, screenwriter, and professor emeritus at the University of Washington in Seattle. A MacArthur fellow, he won the National Book Award for his novel Middle Passage in 1990. He is one of the artists and contributors featured in It’s Life as I See It: Black Cartoonists in Chicago, 1940–1980, published by New York Review Comics.

All Your Racial Problems Will Soon End: The Cartoons of Charles Johnson (Hardcover)

Years before he wrote his National Book Award–winning novel Middle Passage, Charles Johnson created these sidesplitting and subversive gag comics about Black life in America, now collected for the first time in nearly half a century.

From National Book Award winner Charles Johnson, “the celebrated novelist, short story writer, screenwriter, and essayist…comes a small treasure, one to be read and considered and reread” (The New York Times Book Review), showcasing his incredible range and resonant voice.

A twenty-fifth anniversary edition of Charles Johnson’s National Book Award-winning masterpiece—"a novel in the tradition of Billy Budd and Moby-Dick…heroic in proportion…fiction that hooks the mind" (The New York Times Book Review)—now with a new introduction from Stanley Crouch.