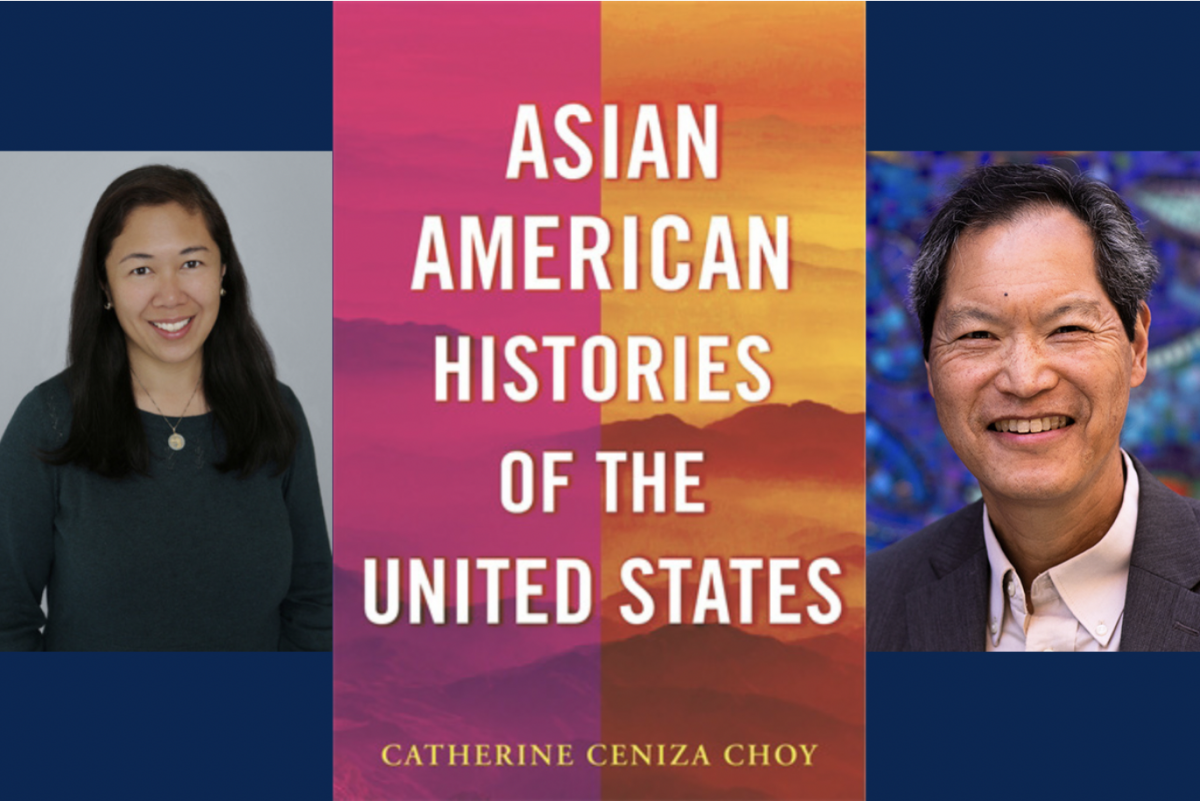 Please RSVP for this event at the link below
https://www.eventbrite.com/e/asian-american-histories-of-the-united-states-tickets-378076646427

About The Event
Join Asia Society Northern California on Thursday, September 15 from 5:30 p.m. - 6:30 p.m. Pacific for a public, in-person program in San Francisco with Catherine Choy, Associate Dean of Diversity, Equity, Inclusion, Belonging, and Justice at UC Berkeley and Professor of Asian American and Asian Diaspora Studies, who will discuss her new book, Asian American Histories of the United States.

Her book features the themes of anti-Asian hate and violence, erasure of Asian American history, and Asian American resistance to what has been omitted in a nearly 200 year history of Asian migration, labor, and community formation in the US. Choy argues that Asian American experiences are essential to any understanding of US history and its existential crises of the early twenty-first century.

After the public program, Professor Choy's book will be available for purchase and book signing from 6:30 p.m. - 7:00 p.m.

This program is complimentary for Asia Society Members.  Learn more and become a member today: https://asiasociety.org/northern-california/join-our-community

About Catherine Ceniza Choy
Catherine Ceniza Choy is the author of the recent book, Asian American Histories of the United States, from Beacon Press in their ReVisioning History book series in August 2022. An engaged public scholar, Choy has been interviewed and had her research cited in many media outlets, including ABC 2020, The Atlantic, CNN, Los Angeles Times, NBC News, New York Times, ProPublica, San Francisco Chronicle, and Vox, on anti-Asian, coronavirus-related hate and violence, the disproportionate toll of COVID-19 on Filipino nurses in the United States, and racism and misogyny in the March 16, 2021 Atlanta murders.

Choy’s first book, Empire of Care: Nursing and Migration in Filipino American History (2003), explored how and why the Philippines became the leading exporter of professional nurses to the United States. Empire of Care received the 2003 American Journal of Nursing History and Public Policy Book Award and the 2005 Association for Asian American Studies History Book Award. Her second book, Global Families: A History of Asian International Adoption in America (2013), unearthed the little-known historical origins of Asian international adoption in the United States beginning with the post-World War II presence of the U.S. military in Asia. Choy also co-edited the anthology, Gendering the Trans-Pacific World (2017), with Judy Tzu-Chun Wu. She is the editor of the Brill book series Gendering the Trans-Pacific World, an editorial board member of the journal Social History of Medicine, and an advisory board member of the NHPRC (National Historical Publications and Records Commission)-Mellon Planning Grants for Collaborative Digital Editions in African American, Asian American, Hispanic American, and Native American History and Ethnic Studies Program.

Choy is Associate Dean of Diversity, Equity, Inclusion, Belonging, and Justice in UC Berkeley’s Division of Computing, Data Science, and Society (CDSS). She is a former Department Chair of Ethnic Studies (2012-2015, 2018-2019) and a former Associate Dean of Undergraduate Studies Division (2019-2021). She received her Ph.D. in History from UCLA and her B.A. in History from Pomona College. The daughter of Filipino immigrants, she was born and raised in New York City. She lives in Berkeley with her husband, Greg Choy, and their two children.

About Russell Jeung
Russell Jeung is Professor of Asian American Studies at San Francisco State University and the author of books and articles on race and religion. He's written Family Sacrifices: The Worldviews and Ethics of Chinese Americans (Oxford U Press, 2019); Mountain Movers: Student Activism and the Emergence of Asian American Studies (UCLA AAS Center, 2019); and At Home in Exile: Finding Jesus Among My Ancestors and Refugee Neighbors (Zondervan, 2016).

For his research and activism, the Association of Asian American Studies awarded Dr. Jeung as Engaged Scholar in 2017. He received the Excellence in Professional Achievement award from San Francisco State University in 2021.

In March 2020, Dr. Jeung co-founded Stop AAPI Hate with Chinese for Affirmative Action and the Asian Pacific Policy and Planning Council. It tracks incidents of COVID-19 discrimination to develop policy interventions and long-term solutions to racism.

Stop AAPI Hate was awarded the 2021 Webby Award for "Social Movement of the Year."  In 2021, Dr. Jeung was named as TIME 100 most influential persons and among the Bloomberg 50 for his global impact.

Please RSVP for this event at the link below
https://www.eventbrite.com/e/asian-american-histories-of-the-united-states-tickets-378076646427

An inclusive and landmark history, emphasizing how essential Asian American experiences are to any understanding of US history