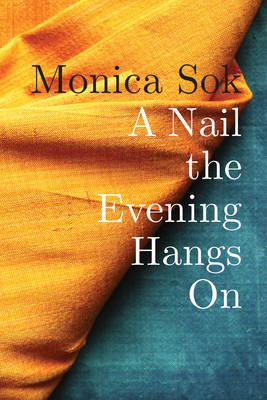 Praise for A Nail the Evening Hangs On

“Sok’s reflective debut teases out how the trauma of the Khmer Rouge is remembered and retained in the fabric of the country and within her own family… Weaving the threads of her family’s stories, history, place, and identity, these poems glimmer with strength and presence.” —Publishers Weekly

“The poet is able to offer quiet wisdom without sentimentality. Ultimately this poet refuses to surrender to victimhood. The chapbook ends optimistically in the borough of Brooklyn, where the young speaker lives happily, sometimes seen in the neighborhood eating bagels with friends and writing new poems. She has found her way to ‘the healing fields.’” ―Marilyn Chin

About A Nail the Evening Hangs On

In this staggering poetry debut, Monica Sok illuminates the experiences of Cambodian diaspora and reflects on America’s role in escalating the genocide in Cambodia. A Nail the Evening Hangs On travels from Phnom Penh to Siem Reap, where Tuol Sleng and other war museums reshape the imagination of a child of refugees; to New York City and Lancaster, where the dailiness of intergenerational trauma persists on the subway or among the cornfields of a small hometown. Embracing collective memory, both real and imagined, these poems move across time to break familial silence. Sok pieces together voices and fragments—using persona, myth, and imagination—in a transformative work that builds towards wholeness.