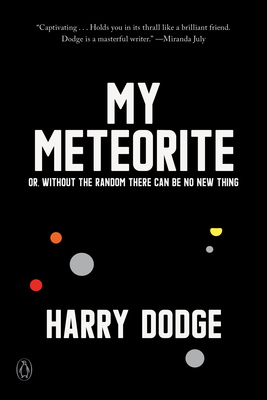 Harry Dodge discusses his new book, My Meteorite: Or, Without the Random There Can Be No New Thing, Frances Richard.

"Dodge has offered a new, luminous angle on autobiography that not only traces where the body has been--but also what it loves, how it thinks and feels within the potent intellectual and physical detritus of its lived world. Reading this book is like being bathed in the bright, gritty sear of a comet's tail. But the mark it leaves is stunningly terrestrial: a thumbprint of a mind on paper--singular in erudition, hurtfully wonder-struck, and true." —Ocean Vuong

“Harry Dodge’s voice and vision are singular, but his genius is for revealing how each of us is plural. This is a beautiful record of his loves and deaths and ways of making, but even its most intimate moments open out, become portals to other possible worlds. No genre can hold this book. It is a work of tender force, prying open every category. My Meteorite is breathtaking—or breathgiving, because the whole thing oxygenates discourse, makes me feel alive.” —Ben Lerner

“Captivating. My Meteorite holds you in its thrall like a brilliant friend—so vulnerable, hot, funny, and casually weird that you don’t notice the profundity until you’re already walloped by it. Dodge juxtaposes the tenderest of human details with hungry, brain-splitting inquiries into the very premise of life, and these shifts in scale are incredibly moving and provocative. Don’t forget to notice that Dodge is a masterful writer; that’s how he pulls this whole thing off.” —Miranda July

“A thought-filled, deeply moving and personal book. The past, present, and future collide like Harry’s meteorite to earth. Life is tenderly felt, questioned, and affirmed within the pages of this exquisite prose.” —Catherine Opie

“Riveting. A freewheeling, feral romp through the wilderness of consciousness and connection!” —Eula Biss

“Harry Dodge's fierce intelligence and love permeates and shapes every line of this book which is redolent with loss, desire, and truth. Expansive in scope and intimate in detail, Dodge's account of becoming a self while living in a world defined by community, lifts the spirit as it feeds the mind. A major achievement.” —Hilton Als

“Harry’s book is ‘outside’ the book. Why should you read it? You’re out there too. I could say this is the smartest memoir I ever read but that’s pulling us back to the safe place. We are animals, machines, friends, reading things and we’ve never been talked to this way before. Seductive and wise, My Meteorite is the conversation you want.” —Eileen Myles

An expansive, radiant, and genre-defying investigation into bonding—and how we are shaped by forces we cannot fully know

Is love a force akin to gravity? A kind of invisible fabric which enables communications through space and time? Artist Harry Dodge finds himself contemplating such questions as his father declines from dementia and he rekindles a bewildering but powerful relationship with his birth mother. A meteorite Dodge orders on eBay becomes a mysterious catalyst for a reckoning with the vital forces of matter, the nature of consciousness, and the bafflements of belonging.

Structured around a series of formative, formidable coincidences in Dodge’s life, My Meteorite journeys with stylistic bravura from Barthes to Blade Runner, from punk to Pale Fire. It is a wild, incandescent book that creates a literary universe of its own. Blending the personal and the philosophical, the raw and the surreal, the transgressive and the heartbreaking, Harry Dodge revitalizes our world, illuminating the magic just under the surface of daily life.

Harry Dodge, an American visual artist and writer whose interdisciplinary practice is characterized by its explorations of relation, materiality and ecstatic contamination, was the recipient of a Guggenheim Fellowship in 2017. His first book, a work of literary non-fiction entitled My Meteorite, or Without the Random There Can Be No New Thing is forthcoming on Penguin Press (2020). Dodge’s sculpture, drawing and video work has been exhibited at many venues nationally and internationally, including solo shows: User, at Callicoon Fine Arts (NY, 2019); Works of Love at JOAN (LA, 2018), a show which also traveled to Tufts University Art Gallery (2019); Mysterious Fires at Grand Army Collective (Brookyn, 2017); The Inner Reality of Ultra-Intelligent Life, at Armory Center for the Arts, Pasadena (2016); The Cybernetic Fold at Wallspace (NY, 2015); Meaty Beaty Big and Bouncy at The Aldrich Contemporary Art Museum (CT, 2013).

About Our Conversation Partner

Frances Richard is the author of Gordon Matta-Clark: Physical Poetics (University of California Press, 2019), and co-author, with Jeffrey Kastner and Sina Najafi, of Odd Lots: Revisiting Gordon Matta-Clark’s “Fake Estates” (Cabinet Books, 2005); she is the editor of I Stand in My Place With My Own Day Here: Site-Specific Art at The New School (The New School/Duke University Press, 2019), and Joan Jonas is on our mind, a volume of essays on the artist (Wattis Institute, 2017). Her books of poems include Anarch. (Futurepoem, 2012), The Phonemes (Les Figues Press, 2012) and See Through (Four Way Books, 2003). She is associate editor at Places journal, and teaches at the California College of the Arts in San Francisco.

My Meteorite: Or, Without the Random There Can Be No New Thing (Paperback)

An expansive, radiant, and genre-defying investigation into bonding—and how we are shaped by forces we cannot fully know