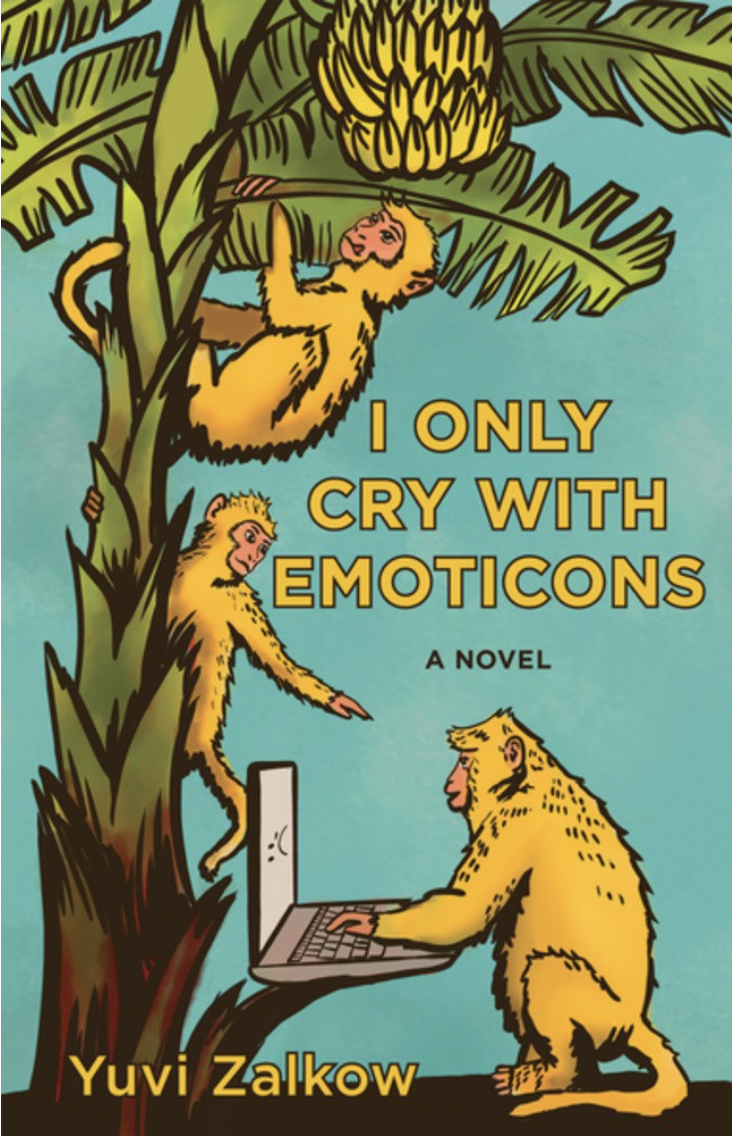 Join us on Wednesday, July 13 at 7pm PT when Yuvi Zalkow celebrates his novel, I Only Cry with Emoticons, with Mysti Berry at 9th Ave!

Or watch online by registering at the link below
https://us02web.zoom.us/webinar/register/WN_H0_HOmSBT3CSaV3vmWKYBg

Praise for I Only Cry with Emoticons
“A sly, forthright comedy about the intersection of love and technology, men and women, and the way our devices have become a loud third wheel. I couldn't put it down.”—Monica Drake, author of Clown Girl and The Stud Book

“Explores the ordinary ways our lives can go terribly wrong despite our best intentions. In their often-hilarious attempts to find common ground, Zalkow’s characters navigate self-sabotage, second chances, and the complicated fluid definition of family in the twenty-first century.”—Margaret Malone, author of People Like You (winner of the Balcones Fiction Prize and a finalist for the PEN/Hemingway Award)

"A refreshingly zany story about the pitfalls of modern technology and the importance of chasing dreams." — Kirkus Reviews

Saul doesn't get why he's misunderstood. At his high-tech day job, he hides in the bathroom writing a novel about his dead grandfather and wonders why his boss wants to fire him. He tells his almost ex-wife about a blind date and wonders why she slams the door in his face. He aches with worry for his seven-year-old son, who seems happier living with his mom and her new man.

When the blind date becomes a complicated relationship, and Saul’s blunders at work threaten the survival of the company, Saul has to wake up and confront his fears.

I Only Cry with Emoticons is a quirky comedy that reveals the cost of being disconnected—even when we're using a dozen apps on our devices to communicate—and an awkward man's search for real connections, on and offline.

About Yuvi Zalkow
Yuvi Zalkow is the author of the novel, A Brilliant Novel in the Works (MP Publishing 2012). His short stories have been published in Glimmer Train, Narrative Magazine, Carve Magazine, Rosebud, The Los Angeles Review, and others. He received an MFA from Antioch University. Yuvi also uses his poor drawing skills to make YouTube videos and mobile apps that ooze with his worries and anxiety. You can find out too much information about him at yuvizalkow.com. Yuvi lives with his wife, daughter, and grumpy cats in Portland, Oregon.

About Mysti Berry
Mysti Berry works in San Francisco and lives in a forgotten corner of The City with her husband, graphic novelist Dale Berry and a small black rescue cat. An active member of MWA, Sisters in Crime, and ITW, Mysti serves on the board of her local Sisters in Crime chapter (NorCal!) and has previously served on the board of the PSWA and Desert Sleuths chapter of SinC. Mysti is the editor and publisher of Low Down Dirty Vote, three volumes of short stories created to raise money for voting rights work. All three volumes contain stories by award-winning writers. Mysti's short stories have been published in EQMM, AHMM, and several crime-fiction anthologies. http://www.mystiberry.com

I Only Cry with Emoticons (Hardcover)

The Rumpus Book Club Pick, May 2022Most Anticipated Books of 2022, The Rumpus16 Upcoming Books from Indie Presses You'll Love, BuzzFeed " C]omic but still tender.... I Only Cry with Emoticons masterfully captures both the anxiety and hope of our modern lives."--BuzzFeed