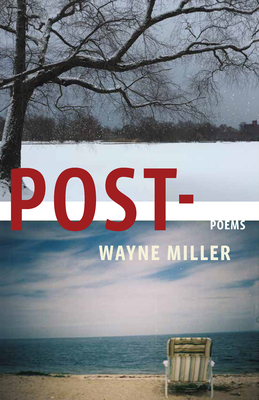 Wayne Miller reads from his new collection of poems, Post-.

"In these poems, we see the way the world around us is layered by confrontation, love, and remembrance. And whether it is the birth of a child, the death of a father, the various ways we’ve found to kill each other, or the aftermath of a riot in response to those killings, we carry it all forward with us, in memory and action, and we give it to those who follow us." —Adrian Matejka

“This is poetry at its most powerful: instrument of change, defense against the commonplace of mall shooters and hoax bombs, deeply entered wisdom of the body in both birth and dying, and a bastion against loss and forgetting. Wayne Miller’s Post- doesn’t take this century lying down, it is a ringing rejoinder to those who say poetry does not matter. In Miller’s lines, we hear the ancient magic of sorrow transformed to hope, elegy bent back around to ode.” —D. A. Powell

The poems of this fourth collection from Wayne Miller exist in the wake of catastrophe. It is a world populated by rogue gunmen on shooting sprees, a world where the only inheritance a father has to pass on is his debt. In this world, every box could be a bomb and what comes after is what is lived. And yet, this painful past is not set in stone. The past becomes the present, yielding toward an immediate future.

The collection coalesces around a series of post-elegies triggered by three occurrences: the birth of his child, the death of his father, and his experience of the seeming explosion of sociohistorical and political conflict and violence over the past decade. Throughout this series, Miller processes grief, but also cuts through pain to open up a way forward in the aftermath of shared loss. "Post-" thrums with pathos and humor, pain and the beauty of living.

The poems of this fourth collection from Wayne Miller exist in the wake of catastrophe, thrumming with pathos and humor, pain and the beauty of living.