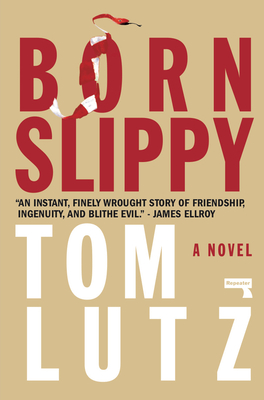 "A highly literary and always engaging 21st century noir... Born Slippy confronts contemporary questions about the relativity of evil that no one can dodge."— Chris Kraus, author of I Love Dick and After Kathy Acker.

"Lutz has the seven deadly sins nailed and rethought for our 2020 world. You’ve got to dig this book!" — James Ellroy

"What a pleasure, to sink under the comedic spell of Tom Lutz’s debut novel! The perfect book for a dreary day-- a gleeful, twisty tale of an unlikely friendship. Its antagonist young bloviating Dmitry Heald, with his wild schemes and hair-raising tales, is the guy you can’t trust to go to the market, while the older Frank, his boss, is a man who should know better, and yet can’t resist. Infinitely entertaining. I’d put it on the shelf between Tom Robbins and Martin Amis, if a place can be cleared there." — Janet Fitch, author of The Revolution of Marina M. and Chimes of a Lost Cathedral

A globetrotting novel about the seductions of and resistance to toxic masculinity.

"Frank knew as well as anyone how stories start and how they end. This fiery mess, or something like it, was bound to happen. He had been expecting it for years."

Frank Baltimore is a bit of a loser, struggling by as a carpenter and handyman in rural New England when he gets his big break, building a mansion in the executive suburbs of Hartford. One of his workers is a charismatic eighteen-year-old kid from Liverpool, Dmitry, in the US in the summer before university. Dmitry is a charming sociopath, who develops a fascination with his autodidactic philosopher boss, perhaps thinking that, if he could figure out what made Frank tick, he could be less of a pig. Dmitry heads to Asia and makes a neo-imperialist fortune, with a trail of corpses in his wake. When Dmitry's office building in Taipei explodes in an enormous fireball, Frank heads to Asia, falls in love with Dmitry's wife, and things go from bad to worse.

Combining the best elements of literary thriller, noir and political satire, Born Slippy is a darkly comic and honest meditation on modern life under global capitalism.

Joining him in conversation will be Aimee Phan. Phan teaches in the MFA Writing Program and Writing and Literature Program at California College of the Arts. A 2010 National Endowment of the Arts Creative Writing Fellow, Aimee received her MFA from the University of Iowa, where she won a Maytag Fellowship. Her first book, We Should Never Meet, was named a Notable Book by the Kiryama Prize in fiction and a finalist for the 2005 Asian American Literary Awards. She has received fellowships from the MacDowell Arts Colony and Hedgebrook. Her writing has appeared in The New York Times, USA Today, Guernica, The Rumpus, and The Oregonian, among others.