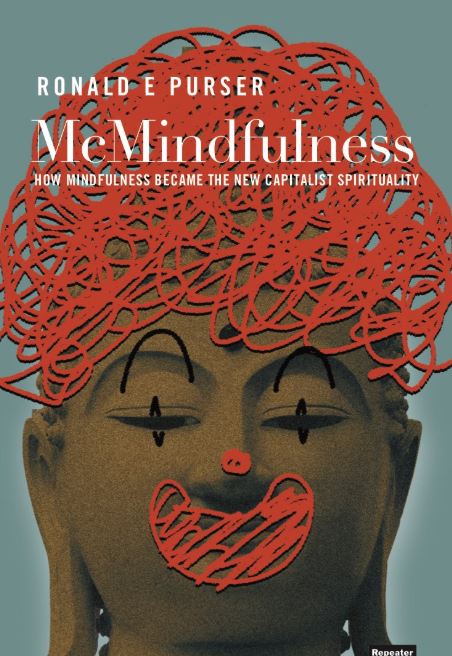 “Far from being either a harmless form of New Age self-indulgence or meditation dressed up as a medicalized antidote to the ubiquitous stresses of modern life, Ron Purser sees the mindfulness movement as epitomizing a malignant trend of contemporary Western individualism, one that is blinding us to the social problems of inherent in neoliberalism and capitalism, providing an anodyne where what is needed is rigorous analysis and political action.”
—Barry Magid, author of What’s Wrong With Mindfulness

“Ron Purser cuts through the comforting New Age jargon used to promote mindfulness, enabling us to distinguish between the practice and its marketing.”
—Richard Payne, Institute of Buddhist Studies

"Spiky, witty, meticulously researched and thoroughly engaging, McMindfulness is the best assessment of ‘Mindfulness’ to date."
— Manu Bazzano, author of Zen and Therapy: Heretical Perspectives and editor of After Mindfulness: new Perspectives on Psychology and Meditation

Mindfulness is now all the rage. From celebrity endorsements to monks, neuroscientists and meditation coaches rubbing shoulders with CEOs at the World Economic Forum in Davos, it is clear that mindfulness has gone mainstream. Some have even called it a revolution.But what if, instead of changing the world, mindfulness has become a banal form of capitalist spirituality that mindlessly avoids social and political transformation, reinforcing the neoliberal status quo?

InMcMindfulness, Ronald Purser debunks the so-called "mindfulness revolution," exposinghow corporations, schools, governments and the military have coopted it as technique for social control and self-pacification.

A lively and razor-sharp critique, Purser busts the myths its salesmen rely on, challenging the narrative that stress is self-imposed and mindfulness is the cure-all. If we are to harness the truly revolutionary potential of mindfulness, wehave to cast off its neoliberal shackles, liberating mindfulness for a collective awakening.

Pause . . . breathe . . . smile. Three small words, yet each contains a universe of wisdom. Let the title be your guide in this inspiring book on awakening to the full depths of mindful living. The Pause is about setting our intention before we think, speak, or act—the ethical dimension of mindfulness.