9th Ave: Remember Who You Are with Friends of Pedro Gomez 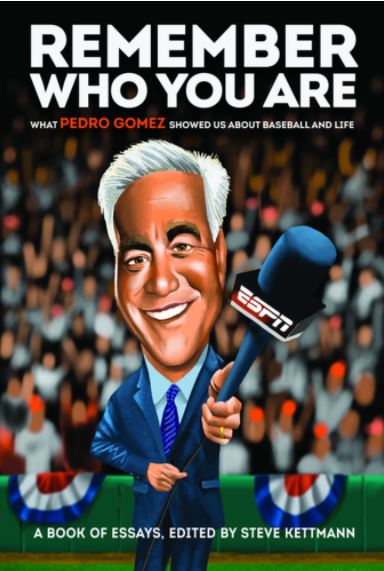 Join us on Thursday, September 2 at 6pm PT when we celebrate the book Remember Who You Are: What Pedro Gomez Showed Us About Baseball and Life in-person at 9th Ave

About Remember Who You Are
Pedro Gomez of ESPN was a beloved figure in baseball. His death from sudden cardiac arrest on Feb. 7, 2021, unleashed an outpouring of heartfelt tributes. He was 58, both a hard-nosed reporter and a smiling ambassador of the sport. These 62 personal essays soar beyond sports to delve into life lessons.

Pedro, a proud Cuban American, was known for his dramatic reporting from Havana. Fully and fluidly bilingual, he did as much as anyone to bridge the wide gap that had existed between U.S.-born players and the Latin Americans now so important to the game’s vitality and future growth. He was also a family man who loved to talk about his three children, Sierra, Dante and Rio, a Boston Red Sox prospect. Pedro was universally known as a smiling presence who brought out the best in people. His humanity and generosity of spirit shaped countless lives, including one of his ESPN bosses, Rob King, who was so moved by Pedro’s advice to him—“Remember who you are”—that he printed up the words and posted them on the wall of his office in Bristol. King is one of a diverse collection of contributors whose personal essays turn Pedro’s shocking death into an occasion to reflect on the deeper truths of life we too often overlook. Part The Pride of Havana and part Tuesdays With Morrie, part The Tender Bar and part Ball Four, this is the rare essay collection that reads like a novel, full of achingly honest emotion and painful insights, a book about friendship, a book about standing for something, a book about joy and love.

This is a book to rekindle in any lapsed fan a love of going to the ballpark, but it’s also a wakeup call that transcends sports. To any journalist, worn down by the demands of a punishing job, to anyone anywhere, pummeled by pandemic times and the dark mood of the country in recent years, these essays will light a spark to seize every opportunity to make a difference, in your work and in the lives of people who matter to you.

Praise for Remember Who You Are
"Pedro Gomez was as kind as he was talented. I can think of no one else in the industry who would have inspired this many heartfelt essays by this diverse a group of writers, ballplayers, coaches, and front office executives. Everyone loved and respected him. And while he left this earth way too soon, his legacy will live on through his children and in the pages of this book." —Molly Knight, Author, The Best Team Money Can Buy

"The words in this collection share a common source—while they were crafted with the head, they originated from the heart. The Gomez Rules are the Commandments for those who cover the game. All who have lived the baseball life should have followed all at some point. They should be etched in tablet."—Broadcaster Ted Robinson

"Reading Remember Who You Are took me on a journey from the day I met Pedro, a smiling young scribe who was my new coworker, who grew into a legend. These tributes not only reveal a man who was beloved by virtually all who knew him, but also paint a vivid picture of our sports media tribe—the laughs, the camaraderie, the adventure, the challenges. At the center of so much of it, smiling and including all of us, was Pedro. We will miss him so." —Ann Killion, Award-winning San Francisco Chronicle columnist

Remember Who You Are: What Pedro Gomez Showed Us about Baseball and Life (Hardcover)

Pedro Gomez of ESPN was a beloved figure in baseball. His death from sudden cardiac arrest on Feb. 7, 2021, unleashed an outpouring of heartfelt tributes. He was 58, both a hard-nosed reporter and a smiling ambassador of the sport. These 62 personal essays soar beyond sports to delve into life lessons.