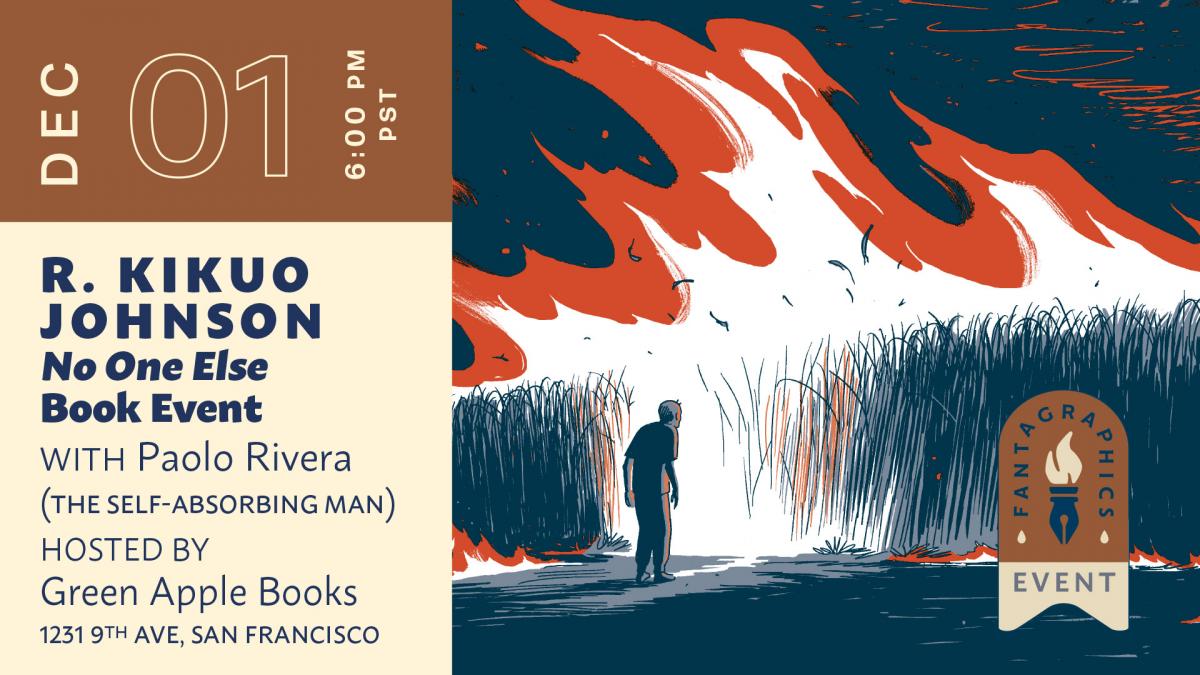 Join us on Wednesday, December 1 at 6pm PT when R. Kikuo Johnson is joined by Paolo Rivera to celebrate his latest graphic novel, No One Else, at 9th Ave!

Praise for No One Else
"Johnson’s dreamlike vignettes capture a family in the aftermath of loss, during a time of transition and, possibly, renewal, as they live through moments that are at once quotidian and monumental." - The New Yorker

"A meditative and melancholy story that’s nevertheless bristling with energy and dry humor — one that lingers long after the first read." - Bomb Magazine

"No One Else might be one of the most subtle, poignant books about grief I’ve experienced." - AIPT

About No One Else
A death throws a family's life into turmoil in one of the most anticipated graphic novel releases of 2021.

In this graphic novel, Charlene is a divorced mom, has a young son named Brandon, and works full-time as a nurse while also caring for her infirm father. She is barely holding their lives together when tragedy strikes and leaves Charlene and Brandon on their own. Charlene, who has put everyone but herself first for years, sees it as an opportunity for a new start of sorts. That is, at least, until her easy-come, easy-go brother, Robbie — a well-intentioned but unserious semi-professional musician — rolls back into town after a long absence. Brandon, a good kid who aches for life to return to normal, focuses his grief on his cat, Batman, who hasn't been seen for a few days since he ran into the sugar cane fields that lie on the edge of their housing tract.
No One Else is a graphic novel of great tender truth, as Charlene, Brandon, and Robbie learn to navigate life day to day with their plans, fears, and desires. Gorgeously drawn and set in the author's hometown on the Hawaiian island of Maui, it is the long-awaited follow up to Johnson's acclaimed debut graphic novel, Night Fisher, and a mature work of literary fiction that is certain to be one of the most talked-about books of 2021.

About R. Kikuo Johnson
R. Kikuo Johnson was born in 1981 in Maui, Hawaii. He graduated from the Rhode Island School of Design and is an illustrator, educator, and graphic novelist based in Brooklyn. His bold, graphic, comic-styled illustrations have appeared on multiple covers of The New Yorker, book covers, and the acclaimed children's book, The Shark King (Toon Books, 2012).

About Paolo Rivera
Paolo Rivera started working for Marvel Comics in 2002. Although he began his career painting in oil, he has since moved on to penciling, inking, and coloring. He was born and raised in Daytona Beach, FL, and graduated from the Rhode Island School of Design in 2003, where he studied with David Mazzucchelli. He broke into the comics industry thanks to writer Jim Krueger, whom he met at Megacon in 1999.

Rivera's best-known painted work is Mythos, a series of six richly-painted origin stories written by Paul Jenkins. He has produced hundreds of covers in the last decade, including The Amazing Spider-Man, Wolverine, Batman, Action Comics, and many more. Beginning in 2011, he penciled 6 issues of Mark Waid’s Daredevil run. His father, Joe Rivera, inked the issues, for which they received multiple Eisners and Harveys. His most recent work was an exclusive poster for the cast & crew of the Avengers movies.

No One Else (Paperback)

ISBN: 9781683964797
Availability: ON HAND in at least ONE of our stores. Click through or call for up-to-the-minute availability.
Published: Fantagraphics - November 9th, 2021

A death throws a family's life into turmoil in one of the most anticipated graphic novel releases of 2021.

Two Maui high school students, Loren and Shane, get mixed up in a petty crime, and their friendship is put to the test. One of the most critically lauded graphic novel debuts in the medium's history is now in hardcover for the first time!

He’s the most amazing, spectacular, sensational hero in all the Marvel-Verse — your friendly neighborhood Spider-Man! And he’s swinging into action in these incredible adventures! First, enjoy a modern spin on Spidey’s classic origin tale of power and responsibility, as a spider bite transforms the life of unpopular teen Peter Parker — for better and worse!