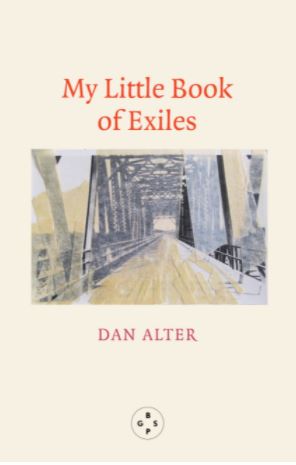 THIS EVENT HAS BEEN POSTPONED.

Please check back when we have a new date scheduled.
Join us on Thursday, January 20 at 7pm PT when Dan Alter is joined by Marcelo Hernandez Castillo and Tess Taylor to celebrate the release of his latest collection, My Little Book of Exiles, at 9th Ave!

Or watch online by registering at the link here
https://us02web.zoom.us/webinar/register/WN_8xcTbTWRRpu3qJYDi4iJMA

Praise for My Little Book of Exiles
"'Could I have come from nowhere, ' asks this poet, who searches his irretrievable past and mysterious present for meaning. Through gorgeous, ambitious, impeccable lyrics, provisionally and with a deep reverence for mysteries, he finds it again and again. This smart, funny, sad, kind book is an act of salvage, and solidarity, a pleasure to read, a wonderful achievement and a gift to us all."--Matthew Zapruder

"In My Little Book of Exiles, Dan Alter 'gathers all the departure in his arms, ' and keeps 'peeling layers off the future of his skin.' This debut collection sings in the form of sonnets, the 'cant i, ' free verse, and prose. Syntax enacts a search and return, performs in arrangement and rearrangement the compositions that scored the poet's life. The close attention paid to prosody creates a soundtrack that connects personal and communal narratives of the Jewish Diaspora, recounts travels across Europe and Israel, through familial stories that reflect on labor, the music of Bob Marley and Paul Simon, forefathers and fatherhood. My Little Book of Exiles will make you wonder where you are going, where you've been, and from where have you come--and is it possible to go back again."--Arisa White

"Dan Alter's marvelous collection, My Little Book of Exiles, is a book about origins and ends, origins that recede as we approach them, and ends projected into a future out of the deprivations of the present. In this heart wrenching lover's quarrel with personal and public legacies, Alter's great achievement is his openness to complication and ambivalence, (see his politically fraught homage to Ezra Pound), his willingness to admit emotional attachment to what he often intellectually distrusts, and the way the agitated music of his lines enact a sense of the present moment as an unsettled and unsettling effect of an even more unsettled past."--Alan R Shapiro

About My Little Book of Exiles
The poems of My Little Book of Exiles sift through layers of diaspora and return, wrestling with the twin experiences of exile and separation. The diasporas of the collection take place in history, family, and the privacy of a mind as it navigates its daily work. In a set of Labor Poems, Alter captures moments of working in the snow of Wisconsin, under floodlights on the Kenai bay of Alaska, or in the machine-roar of construction sites in the Bay Area, where he has worked for two decades as an electrician. Another set of poems confront the vision of the Jewish people's homecoming to their ancestral land. A philosopher of the religion of labor; and an assassinated Prime Minister are some of the figures which weave in with intimate histories of heartbreak and hope. Coming from a home where the Hebrew Bible was a book of bedtime stories, Alter's work is in conversation with texts as varied as the Hebrew Psalms, the poetry of John Keats and Ezra Pound and the songs of Bob Dylan and Bob Marley.

The collection concludes with poems exploring the homeland of family made through marriage and fatherhood, the strains and moments of grace that come with them. What can withstand the pressures of distance, the forces from outside and inside that want to pull us apart? The book's strands weave a tapestry of hope even as the poems seek to discover finally what lasts.

About Dan Alter
Dan Alter's work moves between worlds: from the dust and tumult of construction sites where he makes his living as an electrician, to the oceans and skies of more than one continent. His poems and reviews have been published widely. He has been a fellow of the Arad Arts Project and a finalist for the Rosenberg Award for Poems on the Jewish Experience. He is a member of the Community of Writers at Olympic Valley, and holds MFA from Saint Mary’s College. His first collection of poems, My Little Book of Exiles, will be out December 1, 2021 from Eyewear Publishers of London.  He lives in Berkeley, CA with his wife and daughter.

About Marcelo Hernandez Castillo
Marcelo Hernandez Castillo’s most recent book is Children of the Land: a Memoir (Harper Collins) which received acclaim from Vanity Fair, Entertainment Weekly, the LA Times, The Wall Street Journal, The New York Times and many others. He is also the author of poetry book Cenzontle, winner of the A. Poulin, Jr. prize (BOA editions 2018), and Dulce, winner of the Drinking Gourd Prize (Northwestern University Press). As one of the founders of the Undocupoets campaign, he was the first undocumented student to graduate from the Helen Zell Writers Program at the University of Michigan. His work has been featured in the New York Times, People Magazine, Harper’s Magazine, The Paris Review, Vanity Fair, and the Wall Street Journal among others. He lives in Northern California where he serves as visiting assistant professor at St. Mary’s College and teaches for the Ashland University Low-Res MFA program.

About Tess Taylor
Tess Taylor is the author of five collections of poetry, including The Misremembered World, selected by Eavan Boland for the Poetry Society of America’s inaugural chapbook fellowship, and The Forage House, called “stunning” by The San Francisco Chronicle. Work & Days was named one of The New York Times best books of poetry of 2016.  In spring 2020 she published two books of poems. Last West was commissioned by the Museum of Modern Art as a part of the Dorothea Lange: Words & Pictures exhibition; Rift Zone, from Red Hen Press,  was hailed as “brilliant” in the LA Times and named one of the best books of 2020 by The Boston Globe. Taylor has  served as on-air poetry reviewer for NPR’s All Things Considered for over a decade.  She is currently on the faculty of Ashland University’s Low-Res MFA Creative Writing Program.