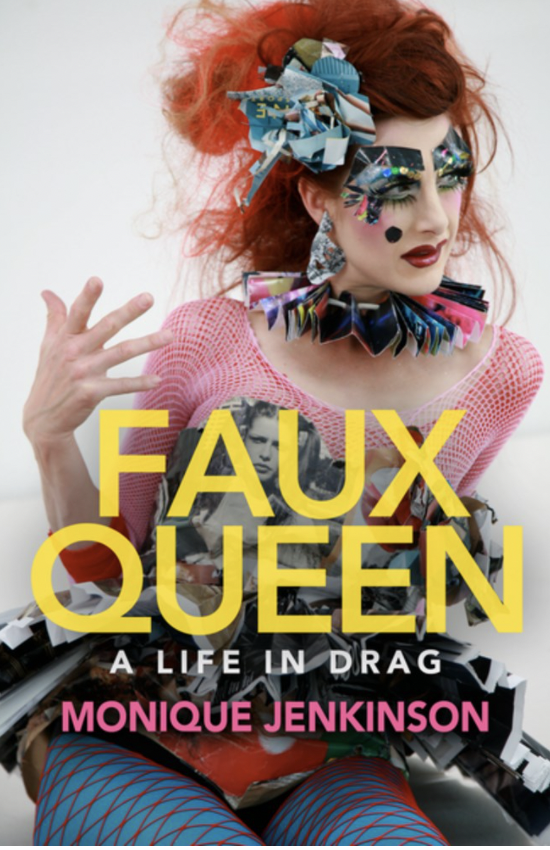 Join us on Friday, April 8 at 7pm PT when Monique Jenkinson celebrates her memoir, Faux Queen: A Life in Drag, with Matthew Clark Davison at 9th Ave!

Masks or Proof of Vaccination Required

Or watch online by registering at the link below
https://us02web.zoom.us/webinar/register/WN_o664wf9vTeypTXCyWiU6lQ

Praise for Faux Queen
“I met Fauxnique when I was 24 at a Gay Pride after-party and she was wearing like this, this mile-long swath of Burberry fabric fastened with like 10 belts and I remember thinking “oh shit, she must be someone important.” AND I WAS RIGHT! Over the years I would come to know her as one of the main fixtures of the latter-day “San Francisco” queer performance underground. If multiplicity is to your taste—Monique/Fauxnique can give you a FEAST. Heralding a career spanning three decades that meets at the oh-so-perilous intersections of drag, post-modern dance and performance art, feminist theory and critique, and activism, this woman is someone I hold dear as a local performance art hero and a sister who has always answered the phone whenever I called. STEAL THIS BOOK!” —Brontez Purnell, author of 100 Boyfriends

“An incredible window into the magical kiki of San Francisco’s underground drag scene. A voice that is dazzling, sassy, and philosophical all at the same time. In writing her memories, Monique/Fauxnique has gifted us a rare invitation to unlock the treasure of queer herstory through the eyes and vision of a faux queen. Taking us on a journey of ballet, punk and fake eyelashes Faux Queen is a living document of the deep connections and histories built by drag queens. I live!” —Julián Delgado Lopera, author of Fiebre Tropical

“Faux Queen is a playful, engaging, critically serious, counter-culturally crucial memoir that is full of joy—the primal joys of art-making, fandom, connecting with like-minded weirdos, finding your place in the world, and allowing your art and obsessions to lead you to it. I love this book.” —Michelle Tea, author of Black Wave, Against Memoir, and Valencia

About Faux Queen
Follow the fierce and fabulous journey of Fauxnique, the first cis-woman to win a major drag queen pageant.

Faux Queen: A Life in Drag is the memoir of a ballet-obsessed girl who moves to San Francisco from the suburbs and finds her people at the drag club.

It joyously chronicles Monique Jenkinson’s creation of her drag persona Fauxnique, the people and cultural practices that crash her identity into being, her journey through one of the most experimental moments in queer cultural history, and her rise through the nightlife underground to become the first cisgender woman crowned as a major pageant-winning drag queen.

Jenkinson finds authenticity through the glee of drag artifice and articulation through the immediacy of performing bodies. She pens a valentine to gay men and their culture while relaying the making of an open-minded feminist and queer ally. Faux Queen finds deep healing in irreverence and posits that it might be possible for us—queer, straight, and almost everyone on either side and in between—to come together in fabulous difference on the dance floor.

About Monique Jenkinson
Monique Jenkinson is an artist, choreographer, performer and writer who dwells joyously at the intersection of contemporary dance and cabaret, and considers the performance of femininity as a powerful, vulnerable and subversive act. In the guise of her drag persona Fauxnique, she made herstory as the first cis woman to win a major drag queen pageant. Her solo performance works have toured nationally and internationally in wide-ranging contexts from nightclubs to theaters to museums, for screaming fans and discerning critics. Faux Queen is her first book.

About Matthew Clark Davison
Matthew Clark Davison is a writer and educator living in San Francisco. He earned a BA and MFA in Creative Writing from San Francisco State University, where he now teaches full-time. His prose has been recently anthologized in Empty The Pews and 580-Split, and published in Guernica, The Atlantic Monthly, Foglifter, Lumina Magazine, Fourteen Hills, Per Contra, Educe, and others; and has been recognized with a Creative Work Grant, (Inaugural Awardee/San Francisco State University), Cultural Equities Grant (San Francisco Arts Commission), the Clark Gross Award for a Novel-in-Progress, and a Stonewall Alumni Award. He is the author of the novel Doubting Thomas.

Faux Queen: A Life in Drag is the memoir of a ballet-obsessed girl who moves to San Francisco from the suburbs and finds her people at the drag club.

Thomas McGurrin is a fourth-grade teacher and openly gay man at a private primary school serving Portland, Oregon's wealthy progressive elite when he is falsely accused of inappropriately touching a male student. The accusation comes just as Thomas is thrust back into the center of his unusual family by his younger brother's battle with cancer.