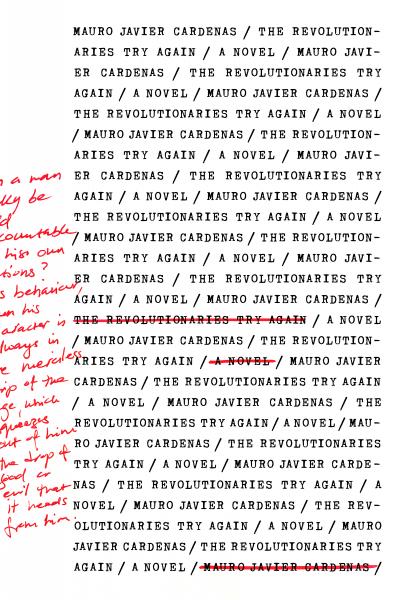 Featuring a performance by the Word for Word Theatrical Company!

Read an excerpt of the novel at Guernica.

Praise for The Revolutionaries Try Again:

“An unhinged novel about three childhood friends contemplating a presidential run against the crooked Ecuadorian president Abdalá “El Loco” Bucaram. This is double-black-diamond high modernism, so do some warm-up stretches before you crack this baby.” —Shelf Awareness

“He’s a tremendously skilled storyteller and monologuist; his writing is so exuberant.” —Paul Yamazaki, buyer at City Lights Books

“In The Revolutionaries Try Again, Mauro Javier Cardenas has taken the edifice of arch modernism and suffused it with tender details of a boyhood in Ecuador. The long, unraveling sentences reveal an extraordinarily musical ear. This is a debut that will last.” —Karan Mahajan

“The Revolutionaries Try Again is a daring novel that pits youthful idealism against persistent and inescapable corruption. Mauro Javier Cardenas is an exciting new voice in Latin American literature, and his debut crackles with an exuberance that readers of Valeria Luiselli, Julio Cortázar, and Horacio Castellanos Moya will love.” —Stephen Sparks, Green Apple Books

“Beware of this writer! The book you’re holding bites. If the reader dares enter after this warning, he’ll never forget it, and the memory will stay just as sharp as the humor and velocity in the stories themselves. Incisive, forceful, and written in an English that’s fiercely subversive, The Revolutionaries Try Again evokes a pair of great Latin American novels: Bolaño’sThe Savage Detectives and Cortázar’s Hopscotch. But this book goes even further: it’s the novel we’ve been waiting for, witness to the most recent wave of immigration from Latin America to the US, told through the eyes of a privileged class that forces their conationals out of their countries. It’s been ten years since a book this alive, this incandescent, has fallen into my hands.” —Carmen Boullosa

About The Revolutionaries Try Again:

Three former members of an idealistic Jesuit volunteer group attempt to transform Ecuador in the lost decade of austerity packages and the populist demagogy of El Loco Bucaram. Antonio, an expat and artist in San Francisco, wants to believe he's left his country's extreme poverty behind for good, but his childhood friend Leopoldo, now a political bureaucrat, persuades him to return to make a run for office. Meanwhile, Rolando suspects his girlfriend Eva will leave him if he acts on his violent revolutionary impulses, so he agrees to stage political plays with her instead. Their relationship is strained by the struggles they've hidden from each other: her brother's disappearance by paramilitary squadrons, his sister's misfortunes crossing the border to the United States.

Extravagant, absurd, and self-aware, The Revolutionaries Try Again plays out against the lost decade of Ecuador's austerity and the stymied idealism of three childhood friends--an expat, a bureaucrat, and a playwright--who are as sure about the evils of dictatorship as they are unsure of everything else, including each other.