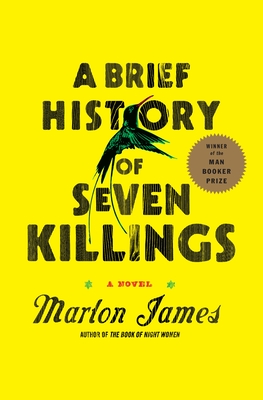 Listen to an NPR interview with Marlon.

Praise for A Brief History of Seven Killings:

Named a best book of 2014 by The New York Times, Chicago Tribune, The Washington Post, The Boston Globe, Time, Newsweek, The Seattle Times, Publishers Weekly, Salon, SF Weekly, and a dozen other publications.

“How to describe Marlon James’s monumental new novel A Brief History of Seven Killings? It’s like a Tarantino remake of The Harder They Come but with a soundtrack by Bob Marley and a script by Oliver Stone and William Faulkner, with maybe a little creative boost from some primo ganja. It’s epic in every sense of that word: sweeping, mythic, over-the-top, colossal and dizzyingly complex. It’s also raw, dense, violent, scalding, darkly comic, exhilarating and exhausting—a testament to Mr. James’s vaulting ambition and prodigious talent.”—The New York Times

“Nothing short of awe-inspiring.”—Entertainment Weekly

About A Brief History of Seven Killings:

In A Brief History of Seven Killings, Marlon James combines brilliant storytelling with his unrivaled skills of characterization and meticulous eye for detail to forge an enthralling novel of dazzling ambition and scope.

On December 3, 1976, just before the Jamaican general election and two days before Bob Marley was to play the Smile Jamaica Concert to ease political tensions in Kingston, seven gunmen stormed the singer’s house, machine guns blazing. The attack wounded Marley, his wife, and his manager, and injured several others. Little was officially released about the gunmen, but much has been whispered, gossiped and sung about in the streets of West Kingston. Rumors abound regarding the assassins’ fates, and there are suspicions  that the attack was politically motivated.

A Brief History of Seven Killings delves deep into that dangerous and unstable time in Jamaica’s history and beyond. James deftly chronicles the lives of a host of unforgettable characters – gunmen, drug dealers, one-night stands, CIA agents,  even ghosts – over the course of thirty years as they roam the streets of 1970s Kingston, dominate the crack houses of 1980s New York, and ultimately reemerge into the radically altered Jamaica of the 1990s. Along the way, they learn that evil does indeed cast long shadows, that justice and retribution are inextricably linked, and that no one can truly escape his fate.

Gripping and inventive, shocking and irresistible, A Brief History of Seven Killings is a mesmerizing modern classic of power, mystery, and insight.

A Brief History of Seven Killings: A Novel (Paperback)

Winner of the Man Booker Prize

One of Entertainment Weekly's Top 10 Books of the Decade

Where the Dead Pause, and the Japanese Say Goodbye: A Journey (Hardcover)

How does one cope with overwhelming grief?