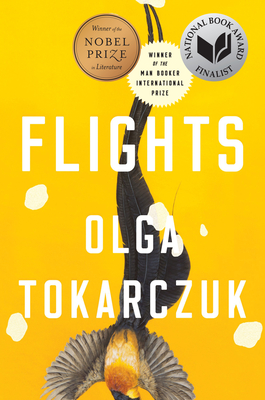 Man Booker International Prizewinners Olga Tokarczuk and Jennifer Croft discuss Flights. Sponsored by The Center for the Art of Translation.

Flights is a novel about travel in the 21st century and human anatomy. From the 17th  century, we have the story of the real Dutch anatomist Philip Verheyen, who dissected and drew pictures of his own amputated leg, discovering in so doing the Achilles tendon. From the 18th century, we have the story of a North African-born slave turned Austrian courtier stuffed and put on display after his death in spite of his daughter’s ever more desperate protests, as well as the story of Chopin’s heart as it makes the covert journey from Paris to Warsaw, stored in a tightly sealed jar beneath his sister’s skirt. From the present we have the trials and tribulations of a wife accompanying her much older professor husband as he teaches a course on a cruise ship in the Greek islands, the quest of a Polish woman who emigrated to New Zealand as a teenager but must now return to Poland in order to poison her terminally ill high school sweetheart, and the slow descent into madness of a young husband whose wife and child mysteriously vanished on a vacation on a Croatian island and then appeared again with no explanation.

Through these narratives, interspersed with short bursts of analysis and digressions on topics ranging from travel-sized cosmetics to the Maori, Flights guides the reader beyond the surface layer of modernity and towards the core of the very nature of humankind.

WINNER OF THE NOBEL PRIZE IN LITERATURE

A visionary work of fiction by "A writer on the level of W. G. Sebald" (Annie Proulx)