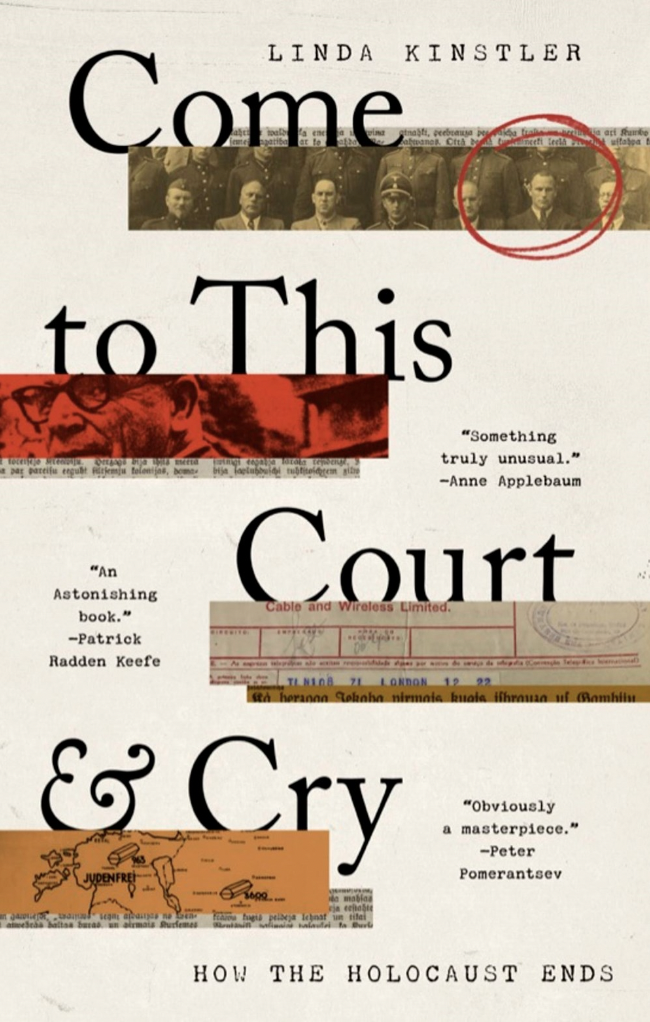 Join us on Friday, January 27 at 7pm PT as we commemorate Holocaust Remembrance Day with Linda Kinstler and Isaac Chotiner for a discussion of Kinstler's new book, Come to This Court and Cry: How the Holocaust Ends, at 9th Ave

Masks Required for In-Person Attendance
Or watch online at the link below
https://youtu.be/b3my17PmBkg

Praise for Come to This Court and Cry
“In her completely absorbing and profound debut, Kinstler sets out to solve a mystery—journeying from a murder scene in Uruguay to the former killing fields of Europe to unravel a family secret about her late grandfather—and in the process unearths vexing questions about the past and how we understand it. Part detective story, part family history, part probing inquiry into how best to reckon with the horrors of a previous century, Come to This Court and Cry is bracingly original, beautifully written, and haunting. An astonishing book.”—Patrick Radden Keefe

“Obviously a masterpiece. A book that makes the Holocaust fresh, slipping seamlessly between story, thinking, politics, poetry, and the personal.”—Peter Pomerantsev

“Linda Kinstler has achieved something truly unusual: A book that captures the paradoxes and nuances of memory politics in contemporary Eastern Europe, while at the same time invoking the trauma that past tragedies leave on individuals and families. Using rigorous, evocative prose, she reminds us of the dangerous instability of truth and testimony, and the urgent need, in the twenty-first century, to keep telling the history of the twentieth.”—Anne Applebaum

About Come to This Court and Cry
In 1965, five years after the capture of Adolf Eichmann in Buenos Aires, one of his Mossad abductors was sent back to South America to kill another fugitive Nazi, the so-called “butcher of Riga,” Latvian Herberts Cukurs. Cukurs was shot. On his corpse, the assassins left pages from the closing speech of the chief British prosecutor at the International Military Tribunal at Nuremberg:

“After this ordeal to which mankind has been submitted, mankind itself . . . comes to this Court and cries: ‘These are our laws—let them prevail!’”

Years later, the Latvian prosecutor general began investigating the possibility of redeeming Cukurs for his past actions. Researching the case, Linda Kinstler discovered that her grandfather, Boris, had served in Cukurs’s killing unit and was rumored to be a double agent for the KGB. The proceedings, which might have resulted in Cukurs’s pardon, threw into question supposed “facts” about the Holocaust at the precise moment its last living survivors—the last legal witnesses—were dying.

Rich with scholarly detective work and personal reflection, Come to This Court and Cry is a fearlessly brave examination of how history can become distorted over time, how easily the innocent are forgotten, and how carelessly the guilty are sometimes reprieved.

About Linda Kinstler
Linda Kinstler is the deputy editor of The Dial and a contributing writer to 1843 Magazine and Jewish Currents. Her reporting and criticism on issues of memory politics, technology, law, and history can be found in The New York Times, The Atlantic, The Economist, The Guardian and elsewhere. Her first book, Come to This Court and Cry (Public Affairs, 2022), is an investigation into denialism, historical revisionism, and judicial overreach in Eastern Europe; it was recently longlisted for the Wingate Prize. She is also a PhD candidate in Rhetoric at U.C. Berkeley.

About Isaac Chotiner
Isaac Chotiner is a staff writer at The New Yorker, where he is the principal contributor to Q. & A., a series of interviews with public figures in politics, media, books, business, technology, and more. Before joining The New Yorker, Chotiner was a staff writer at Slate and the host of the podcast “I Have to Ask.” He has written for The New Yorker, the Times, The Atlantic, the Times Literary Supplement, the Washington Post, and the Wall Street Journal. After graduating from the University of California, Davis, Chotiner worked at The Washington Monthly before joining The New Republic, in 2006, as a reporter-researcher. He went on to run the magazine’s online books section and later became a senior editor.