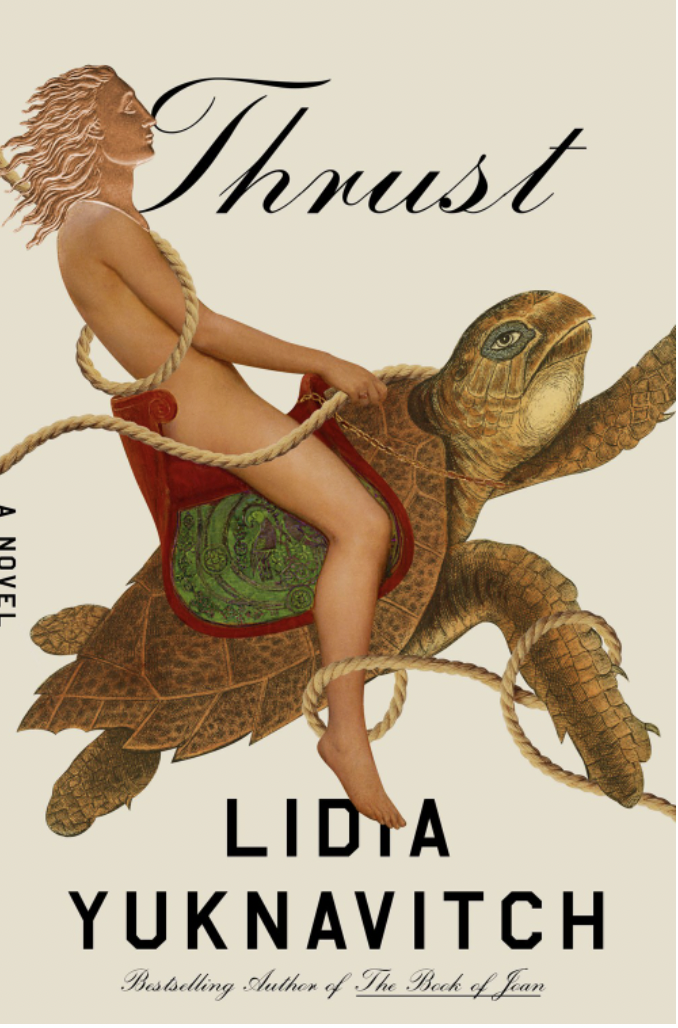 Join us on Thursday, June 30 at 7pm PT when Lidia Yuknavitch joins us to celebrate her latest novel, Thrust, with Esmé Weijun Wang at 9th Ave!

Or watch online by registering at the link below
https://us02web.zoom.us/webinar/register/WN_wJ9RTuqdS1eZVVFGESCOYg

Praise for Thrust
“Thrust is alarmingly trenchant—and a hell of a wild ride. Daring, dazzling, and earth-splitting, this is a book to take in wide-eyed.”  —Rebecca Makkai, author of The Great Believers

"Blistering and visionary . . . This is the author’s best yet.” —Publishers Weekly (starred review)

“Yuknavitch is interested in the way the bodies of immigrants, refugees, and marginalized people have been the fodder used to keep the American project going—and her humane love for those same bodies shines. . . . Complex, ambitious, and unafraid to earnestly love—and critique—America and its most dearly held principles.” —Kirkus Reviews

About Thrust
As rising waters—and an encroaching police state—endanger her life and family, a girl with the gifts of a "carrier" travels through water and time to rescue vulnerable figures from the margins of history.

Lidia Yuknavitch has an unmatched gift for capturing stories of people on the margins—vulnerable humans leading lives of challenge and transcendence. Now, Yuknavitch offers an imaginative masterpiece: the story of Laisvė, a motherless girl from the late 21st century who is learning her power as a carrier, a person who can harness the power of meaningful objects to carry her through time. Sifting through the detritus of a fallen city known as the Brook, she discovers a talisman that will mysteriously connect her with a series of characters from the past two centuries: a French sculptor; a woman of the American underworld; a dictator's daughter; an accused murderer; and a squad of laborers at work on a national monument. Through intricately braided storylines, Laisvė must dodge enforcement raids and find her way to the present day, and then, finally, to the early days of her imperfect country, to forge a connection that might save their lives--and their shared dream of freedom.

A dazzling novel of body, spirit, and survival, Thrust will leave no reader unchanged.

About Lidia Yuknavitch
Lidia Yuknavitch is the nationally bestselling author of the novels The Book of Joan, The Small Backs of Children, and Dora: A Headcase, the story collection Verge, and the memoir The Chronology of Water. She is the recipient of two Oregon Book Awards and has been a finalist for the Brooklyn Public Library Literary Prize and the PEN Center USA Creative Nonfiction Award. She lives in Portland, Oregon.

About Esmé Weijun Wang
Esmé Weijun Wang is the author of the New York Times-bestselling essay collection The Collected Schizophrenias and the novel The Border of Paradise. She received a Whiting Award as well as the Graywolf Nonfiction Prize, and was named by Granta as one of the Best Young American Novelists in their decennial list. Born in the Midwest to Taiwanese parents, Esmé is the founder of The Unexpected Shape Writing Academy for ambitious writers living with limitations, and can be found at esmewang.com.

THRUST IS:
“Epic.” –The New York Times
“A triumph.” —Elle
“Stunningly beautiful.” —The Daily Beast
“Both of the moment and utterly timeless.” —Chicago Review of Books
“A book to take in wide-eyed.”  —Rebecca Makkai

LONGLISTED FOR THE STORY PRIZE

A fiercely empathetic group portrait of the marginalized and outcast in moments of crisis, from one of the most galvanizing voices in American fiction.