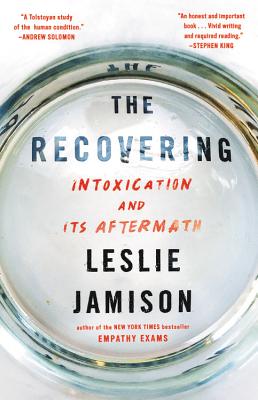 Leslie Jamison discusses her new book, The Recovering: Intoxication And Its Aftermath with Anna Wiener.

Praise for The Recovering

"Leslie Jamison has written an honest and important book. It will be important to recovering alcoholics who wonder if there really is life after booze, and I think it will be important to writers and critics, because she weaves her story of recovery into those of other artists (mostly writers, but also Billie Holiday and Amy Winehouse) who also made the jump from soused to sober. And some who didn't. The most important thematic thread may be its insistence that the talented artist who needs booze or drugs to support his work and withstand his own vision does not, in fact, exist. It's important to debunk what Todd Rundgren called 'the ever popular tortured artist effect.' All in all, vivid writing and required reading."―Stephen King

"Leslie Jamison's The Recovering is a definitive investigation of both the romance of intoxication and the possibilities for recovery. Whether interviewing veterans of a communal rehab house, digging through the archives of alcoholic writers, or examining her own motives and thoughts, Jamison shows ways of living alongside contradictions without diminishing their confusion and pain. Graceful, forensic, and intimate, The Recovering sets a new bar in addiction studies. It is a courageous and brilliant example of what nonfiction writing can do."―Chris Kraus, author of I Love Dick

"You don't need to be an addict to be enthralled by The Recovering. This book is for anyone interested in a dazzlingly brilliant, uncommonly compassionate, and often hilarious study of human nature. Leslie Jamison's work will definitely make you feel smarter--I'd like to borrow her brain to pick a fight with a couple of people--but The Recovering also reads like a gripping mystery as written by a subversive and deeply passionate philosopher. Her writing is unexpected, profound, and perverse--in short, a thrill to read. Best of all, for a writer so gifted at locating the excruciating commonalities of isolation, Jamison manages this greatest feat of magic: when I read her words, I come away feeling less alone."―Mary-Louise Parker, author of New York Times bestseller Dear Mr. You

With its deeply personal and seamless blend of memoir, cultural history, literary criticism, and journalistic reportage, The Recovering turns our understanding of the traditional addiction narrative on its head, demonstrating that the story of recovery can be every bit as electrifying as the train wreck itself. Leslie Jamison deftly excavates the stories we tell about addiction--both her own and others'--and examines what we want these stories to do, and what happens when they fail us.

All the while, she offers a fascinating look at the larger history of the recovery movement, and at the literary and artistic geniuses whose lives and works were shaped by alcoholism and substance dependence, including John Berryman, Jean Rhys, Raymond Carver, Billie Holiday, David Foster Wallace, and Denis Johnson, as well as brilliant figures lost to obscurity but newly illuminated here.

For the power of her striking language and the sharpness of her piercing observations, Jamison has been compared to such iconic writers as Joan Didion and Susan Sontag. Yet her utterly singular voice also offers something new. With enormous empathy and wisdom, Jamison has given us nothing less than the story of addiction and recovery in America writ large, a definitive and revelatory account that will resonate for years to come.

The Recovering: Intoxication and Its Aftermath (Hardcover)

From the New York Times bestselling author of The Empathy Exams comes this transformative work showing that sometimes the recovery is more gripping than the addiction.

From personal loss to phantom diseases, The Empathy Exams is a bold and brilliant collection, winner of the Graywolf Press Nonfiction Prize

The Gin Closet: A Novel (Paperback)

From the author of the New York Times bestselling essay collection The Empathy Exams and the memoir The Recovering, Leslie Jamison’s “exquisitely beautiful” (San Francisco Chronicle) novel about three generations of women and the inescapable brutality of love.

As a young woman, Tilly flees home for the hollow underworld of Nevada, looking