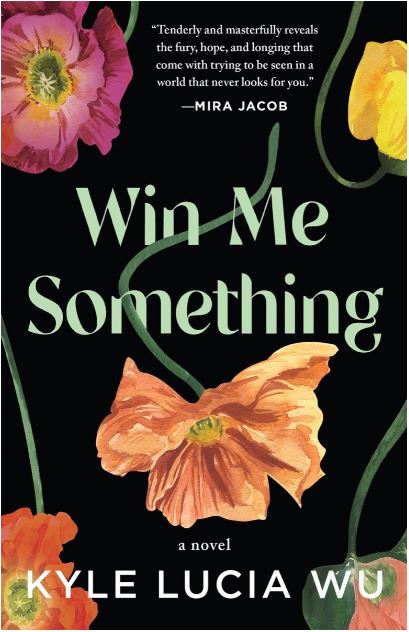 Join us on Monday, November 15 at 6pm PT when Kyle Lucia Wu discusses her novel, Win Me Something, with K-Ming Chang at 9th Ave!

Join us virtually by registering at the link below
https://us02web.zoom.us/webinar/register/WN_JJF6VmQDTBGVE-G4bFaCtg

Praise for Win Me Something
"A lovely coming-of-age story that will resonate with anyone who’s felt separate, or questioned where they belong." - The Washington Post

"Impressive. . . . expect subtle surprises as Willa’s relationships evolve in a satisfying accumulation of carefully drawn small moments that build toward her understanding, even acceptance, of both an imperfect world and herself." - Kirkus, Starred Review

"I’ve never read a novel quite like Win Me Something, which is to say that I’ve never seen the nuances of navigating a biracial identity put, so beautifully, in fiction. . . . Readers will recognize themselves in Willa’s loneliness, and they will feel that they are, finally, in good company." - LitHub

About Win Me Something
A perceptive and powerful debut of identity and belonging—of a young woman determined to be seen.

Willa Chen has never quite fit in. Growing up as a biracial Chinese American girl in New Jersey, Willa felt both hypervisible and unseen, too Asian to fit in at her mostly white school, and too white to speak to the few Asian kids around. After her parents’ early divorce, they both remarried and started new families, and Willa grew up feeling outside of their new lives, too.

For years, Willa does her best to stifle her feelings of loneliness, drifting through high school and then college as she tries to quiet the unease inside her. But when she begins working for the Adriens—a wealthy white family in Tribeca—as a nanny for their daughter, Bijou, Willa is confronted with all of the things she never had. As she draws closer to the family and eventually moves in with them, Willa finds herself questioning who she is, and revisiting a childhood where she never felt fully at home. Self-examining and fraught with the emotions of a family who fails and loves in equal measure, Win Me Something is a nuanced coming-of-age debut about the irreparable fissures between people, and a young woman who asks what it really means to belong, and how she might begin to define her own life.

About Kyle Lucia Wu
Kyle Lucia Wu has received the Asian American Writers' Workshop Margins Fellowship and residencies from The Millay Colony, The Byrdcliffe Colony, Plympton's Writing Downtown Residency, and the Kimmel Harding Nelson Center. She is the Programs & Communications Director at Kundiman and has taught creative writing at Fordham University and The New School. She was born in New Jersey and lives in Los Angeles.

About K-Ming Chang
K-Ming Chang was born in the year of the tiger. She is a Kundiman Fellow and a Lambda Literary Award finalist in poetry. Her poems have been anthologized in Ink Knows No Borders, Best New Poets 2018, Bettering American Poetry Vol. 3, the 2019 Pushcart Prize Anthology, and elsewhere. Raised in California, she now lives in New York.

Win Me Something (Paperback)

An Indie Next Pick

NEW YORK TIMES BOOK REVIEW EDITORS’ CHOICE • Three generations of Taiwanese American women are haunted by the myths of their homeland in this spellbinding, visceral debut about one family’s queer desires, violent impulses, and buried secrets.