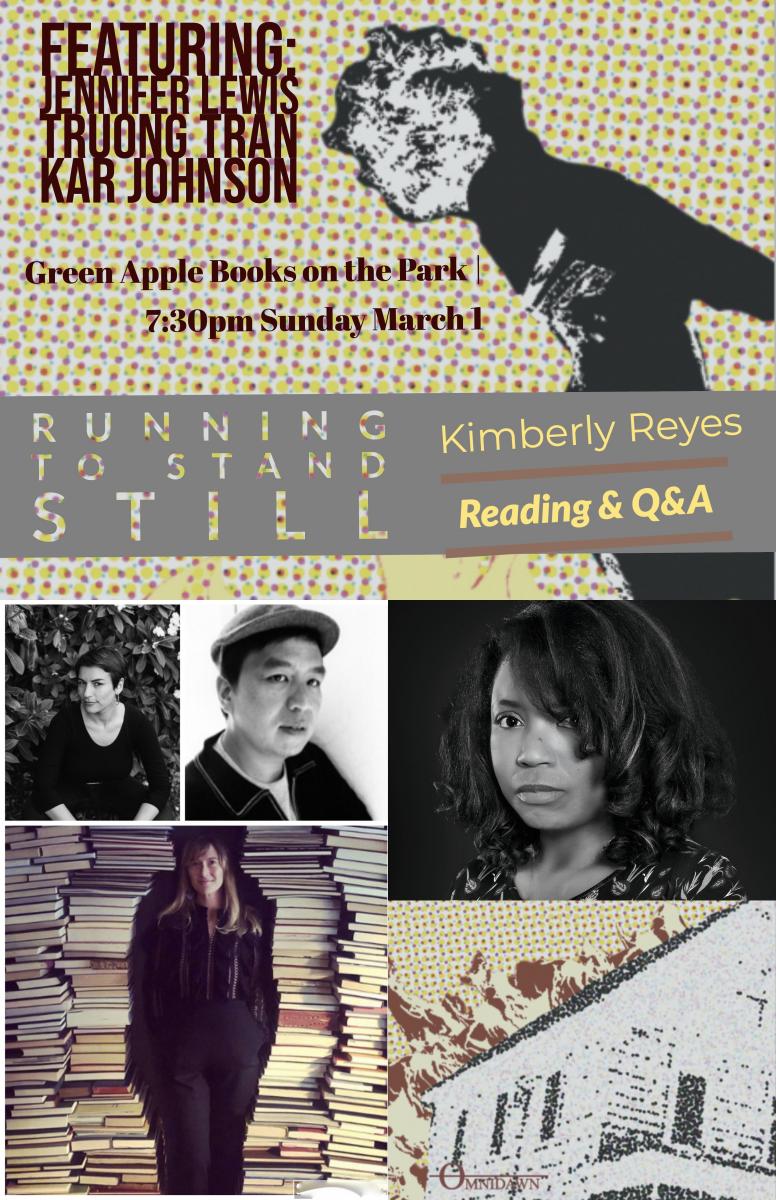 Praise for Running to Stand Still

"Rich in literary and pop culture references, the voice of Running to Stand Still is both specific and wide-ranging. Quotations from artists as disparate as Frank Bidart and The Killers splice and introduce poems. In one section, Reyes repurposes screenshots of text messages; in another, partial strikethroughs enable multiple readings. Through this juxtaposing of different forms and language, Reyes weaves a deeply intimate portrait out of impossibly expansive themes: modern life, Black womanhood, family history, and technology."— Poets & Writers

“These poems, with through lines of gender, race, adventure, desire, build into a deeply moving provocation of loss and discovery. The brilliance of these poems is their achievement of discomfit as they simultaneously travel distance and move inward. . . . The title of this collection is a promise: how poetry can at once run and stand still, and why that matters.”— Valerie Wallace, author of House of McQueen

"Pinballing between family lore, social media, and pop culture discourse, Reyes deconstructs the casual discourses of contempt her narrators are invited to embrace outside and within blood lines, however much 'birthright belonging / is the maim.' And yet, betrayed by the human desire to belong ('To be kept is to / be kept, and what you wanted'), they—she—never quite reach escape velocity: Running to Stand Still is thus the poignant record of an orbit, both victory and impasse."— Tyrone Williams, author of As iZ

About Running to Stand Still

Histories, stories, lyrics, aspirations, dreams, pressures, and images are spun into a musical tale through a site of convergence: the Black female body. Swarmed by external gazes and narratives, the inhabitant of this body uses her power to turn down this cacophony of noise and compose a symphonic space for herself. By breaching boundaries of racism, sexism, sizeism, colorism, and colonialism, these poems investigate the memories and realities of existing as Black in America. Building from poetic, journalistic, and musical histories, poet and essayist Kimberly Reyes constructs a complex and fantastic narrative in which she negotiates a path to claim her own power.
These poems teem with life, a life rich with many selves and many histories that populate in the voice of Reyes’s poetic narrator. They sway between negotiations of hypervisibility and erasure, the inevitable and the chosen, and the perceived and the constructed. Reyes’s poems offer sharp observations and lyrical movement to guide us in a ballad of reconciliation and becoming.

Truong Tran (b. 1969) received his MFA from San Francisco State University in 1995 in the field of writing. He is the author numerous volumes of poetry including the upcoming book 100 Words (Omnidawn) co-authored with Damon Potter. He is a self taught visual artist whose work has been exhibited in venues including the California Historical Society, California Institute of Integral Studies, SOMArts Gallery, Telegraph Hill Gallery, The San Francisco International Art Market Art Fair, Avenue 12 Gallery and The Peninsula Museum of Art. He lives in San Francisco and teaches at Mills College.

Kar Johnson is a writer, performer, educator, and bookseller in San Francisco. Their writing has appeared in or is forthcoming from The Northridge Review, Foglifter, and the anthology Love is the Drug and Other Dark Poems. Kar has performed their work for series Red Light Lit, The Racket, RADAR, and many others. They received their MFA from San Francisco State University.

Jennifer Lewis is the editor of Red Light Lit. Her fiction has been published in Cosmonaut's Avenue, Eleven Eleven, Fourteen Hills Press, Midnight Breakfast, sPARKLE & bLINK and X-Ray Lit Mag. She received her MFA in creative writing from San Francisco State University and she teaches at The Writing Salon in San Francisco.

Histories, stories, lyrics, aspirations, dreams, pressures, and images are spun into a musical tale through a site of convergence: the Black female body. Swarmed by external gazes and narratives, the inhabitant of this body uses her power to turn down this cacophony of noise and compose a symphonic space for herself.