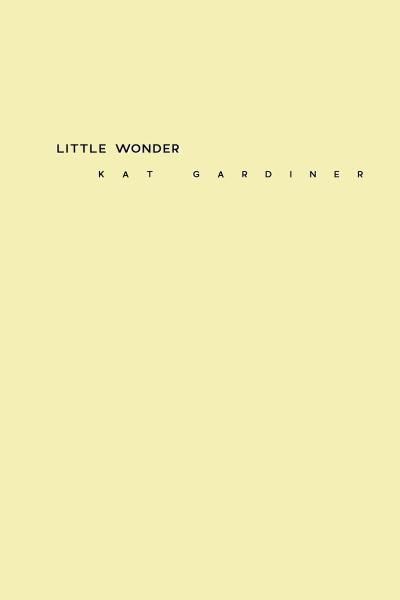 Kat Gardiner’s debut collection of microfiction, Little Wonder, springs from the year she spent in Anacortes, Washington. Young and idealistic, she and her husband moved to town to open a café and music venue in the hopes of finding a home there.

The experiment lasted exactly one year.

In interconnected fragments, Little Wonder reads like a series of love notes to a former self. Characters navigate frustration, loss, heartbreak, but they also come into new versions of themselves. Little Wonder sheds light on the idea that joy and pain are often two sides of the same coin — and that being alive in this world can necessitate embracing both.

"Is it because spring is nature's rebirth that our emotions get so attached to it? All of the descriptions of the town and the feelings there are so accurate and truthful and achy... I can see the sun sinking down over Anacortes at the end of every page. Little Wonder has the ache of Raymond Carver, the honesty, the vulnerability. It's so melancholic and honest and beautiful." - Kyle Field (Little Wings)

Born in Oklahoma, raised in the Pacific Northwest, and currently based in Detroit, Kat Gardiner carries a restlessness through her writing that's been honed by a lifelong search for roots. Her debut collection of short fiction, Little Wonder, springs from the year Gardiner spent in Anacortes, Washington, during her early twenties. Young and idealistic, she opened a coffee shop and music venue with her husband in the hopes of finding a home in the city's artistic community. The experiment lasted exactly one year. Gardiner closed the coffee shop and moved away from Anacortes, ending a stressful and dreamlike chapter in her life.

Gardiner studied creative writing at Bennington College in Vermont, and later took workshops with Tom Spanbauer, the creator of the technique known as Dangerous Writing, in Portland, Oregon. In developing her craft, she found herself drawn to microfiction, citing Lydia Davis as a touchstone. "There's something powerful in succinct details," Gardiner says. Writing in short, interconnected fragments enabled her to revisit the year spent in Anacortes with a new sense of perspective. Little Wonder reads like a series of love notes to a former self, or a collection of Polaroids made golden with age. Gardiner's characters navigate frustration, loss, and heartbreak, but they also come into new versions of themselves, a transformation they may not recognize in the moment. Through poignant vignettes furnished generously with detail, Gardiner looks into what it means to enter the world and realize that the world is not nearly as amenable to change as an optimistic young person might think. "It's been liberating to make art out of both the painful and the joyous parts of that experience," she says. With Little Wonder, she's shed light on the idea that joy and pain are often two sides of the same coin — and that being alive in this world can necessitate embracing both.

About Sea of Bees

Sea of Bees is the musical project of Julie Ann Bee, or Jules as everyone calls her. She sings, writes the songs, and plays lots of musical instruments.

"If I had to sum her up in a sentence, she's sort of a female Sparklehorse. Her music is rooted very much in folk and rock but wildly experimental; some crazy, beautiful, wonderful sounds on her new album "Songs for the Ravens." On my top 10 for the year." -Robin Hilton, NPR radio host

"An unrelenting sense of wide-eyed beauty. The album ends up sounding like some sort of collision between Elliot Smith and The Mamas and the Papas. A talent for elegant, cathartic songwriting. Build a Boat to the Sun is completely endearing.” The 405

"I'm not entirely sure why I love this album so much... ...That which I cannot put my finger on, is the mysterious, wonderful, and addictive qualities of this album as a whole. Bravo to Jules and her Sea of Bees." -Jason Lytle (Grandaddy)

I'm a songwriter based in San Francisco. I've been playing piano since I was 7, and now I play a few other instruments as well. I write and record solo, and occasionally have a few friends sing on my songs. My music has been called haunting by a few different people, so maybe that's accurate. My favorite color is pink and my favorite animal is the cat.