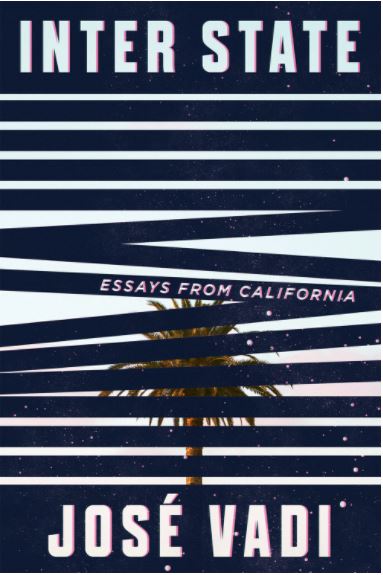 Join us on Thursday, January 6 at 7pm PT when José Vadi is joined by Liam O'Donoghue to discuss his book, Inter State: Essays from California, at 9th Ave!
Presented in partnership with the East Bay Yesterday podcast

“This dynamic collection of eight personal essays by native Californian José Vadi celebrates the history and culture of his home state while mourning the ravages of gentrification.” —Shelf Awareness

“Inter State is a cinematic, tender collection of essays that breathe memory into the layered histories of an ever changing California. Written with prose that sings with love, Vadi demands that we pay homage to the cracks, the streets, the buildings, and familial bodies that once occupied spaces now crowded with gentrifiers and dreamers. ’How can I tell you how much an intersection means to me?’ Vadi writes, and so we learn a land by driving, walking, by skating through smoke and ruin, paying attention to what startling beauty persists." — Mariama J. Lockington, author of The Lucky Daughter and For Black Girls Like Me

About Inter State
A “must read” debut collection of poetic, linked essays investigating the past and present state of California, its conflicting histories and their impact on a writer’s family and life (Los Angeles Times).
California has been advertised as a destiny manifested for those ready to pull up their bootstraps and head west across to find wealth on the other side of the Sierra Nevada since the 19th century. Across the seven essays in the debut collection by José Vadi, we hear from the descendants of those not promised that prize.
Inter State explores California through many lenses: an aging obsessed skateboarder; a self-appointed dive bar DJ; a laid-off San Francisco tech worker turned rehired contractor; a grandson of Mexican farmworkers pursuing the crops they tilled.
Amidst wildfires, high speed rail, housing crises, unprecedented wealth and its underlying decay, Inter State excavates and roots itself inside those necessary stories and places lost in the ever-changing definitions of a selectively golden state.

About East Bay Yesterday
East Bay Yesterday was named “The Best Podcast about the East Bay” in 2017 by the East Bay Express. Since 2016, this independently-produced series has explored stories of culture, politics and nature from Oakland, Berkeley and other towns throughout Alameda and Contra Costa counties. An hour-long version East Bay Yesterday featuring interviews not included in the podcast now airs every other Wednesday at 1 P.M. on 94.1 KPFA-FM.

About José Vadi
JOSÉ VADI is an award-winning essayist, poet, playwright, and film producer. Vadi received the San Francisco Foundation’s Shenson Performing Arts Award for his debut play, a eulogy for three, produced by Marc Bamuthi Joseph’s Living Word Project. He is the author of SoMa Lurk, a collection of photos and poems published by Project Kalahati / Pro Arts Commons. His work has been featured by the PBS NewsHour, the San Francisco Chronicle and The Daily Beast, while his writing has appeared in Catapult, McSweeney’s, New Life Quarterly, The Los Angeles Review of Books, SFMOMA’s Open Space, and Pop-Up Magazine.

About Liam O'Donoghue
Liam O’Donoghue is the host and producer of the East Bay Yesterday podcast and co-creator of the Long Lost Oakland map. His journalism has appeared in outlets such as KQED Arts, Berkeleyside, Open Space, KALW-FM, Mother Jones, Salon, East Bay Express, and the syndicated NPR program Snap Judgement. In 2018, he was honored by the East Bay Express as “the best journalist-turned-historian” and presented with a “Partners in Preservation Award” from Oakland Heritage Alliance. O’Donoghue has given many presentations on local history at libraries, schools and bookstores and throughout the Bay Area, as well as at institutions such as The California Historical Society, The Hearst Museum, Oakland Rotary Club, and Nerd Nite East Bay. O’Donoghue’s quotes on Oakland-related issues have appeared in media outlets including New York Times and Washington Post.

A "must read" debut collection of poetic, linked essays investigating the past and present state of California, its conflicting histories and their impact on a writer's family and life (Los Angeles Times).