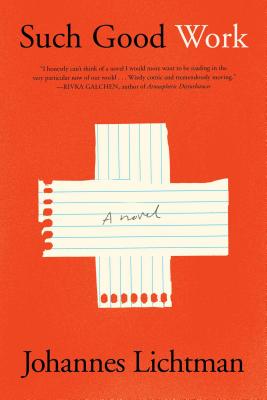 Praise for Such Good Work

“I honestly can't think of a novel I would more want to be reading in the very particular now of our world. Lichtman’s narrator is an everyman (albeit a singular one) who just wants to be good—that slipperiest of ambitions—and yet his efforts pretty much always go wrong. But also they don't. Wisely comic and tremendously moving, Such Good Work thinks in detail about immigration, addiction, privilege, power and loneliness; but it does so by mining the seemingly inconsequential for its true profundity. Lichtman never falls for the siren song of self-seriousness, and that is part of what makes his novel feel so accurate, and so important. In being open to complexity, and sensitive to absurdity, Such Good Work gets at the wholeness and difficulty and beauty of lives both ordinary and extraordinary.”—RIVKA GALCHEN, author of Atmospheric Disturbances


"Johannes Lichtman has given us a powerful, unsparingly honest portrayal of a soul in torment, trying to find his way to a decent life.  How to love, how to work--how to live, however modestly, with meaning and purpose inside a self that for too long has used booze and drugs to avoid the hard work of being human.  Building a genuine self, that's an inside job, and in Such Good Work Lichtman delivers a deeply affecting novel of one young man's struggle to be whole."—BEN FOUNTAIN, National Book Critics Circle Award-winning author of Billy Lynn’s Long Halftime Walk

About Such Good Work

A timely and provocative debut novel that Rivka Galchen calls “wisely comic and tremendously moving,” about a creative writing teacher whose efforts to stay sober land him in Malmö, Sweden, where drugs are scarce but the refugee crisis forces a very different kind of reckoning.

Jonas Anderson might be an excellent teacher if he weren’t addicted to drugs. Instead, at age twenty-eight, he’s been fired from yet another creative writing position after assigning homework like, visit a stranger’s funeral and write about it.

Jonas needs to do something drastic and, as a dual American-Swedish citizen, he knows Sweden is an easy place to be a graduate student and a difficult place to be a drug addict. The year is 2015 when he arrives in Malmö, a city trying to cope with the arrival of tens of thousands of Middle Eastern refugees. Driven by an existential need to “do good,” Jonas volunteers with an organization that teaches Swedish to the desperate and idling young refugees. But one young man, Aziz, will force Jonas to question whether “doing good” can actually help another person.

Such Good Work is a darkly funny work of autofiction that asks us to consider how one should go about being a good person in our modern world. In his striking debut novel, Johannes Lichtman’s uses pathos and humor to grapple with simple yet necessary questions—Such Good Work begs you to consider the person you are, as well as the person you hope to be.

Such Good Work: A Novel (Hardcover)

From Johannes Lichtman comes a wisely comic debut novel about a teacher whose efforts to stay sober land him in Sweden, but the refugee crisis forces a very different kind of reckoning.

You don’t have to be perfect to do good.