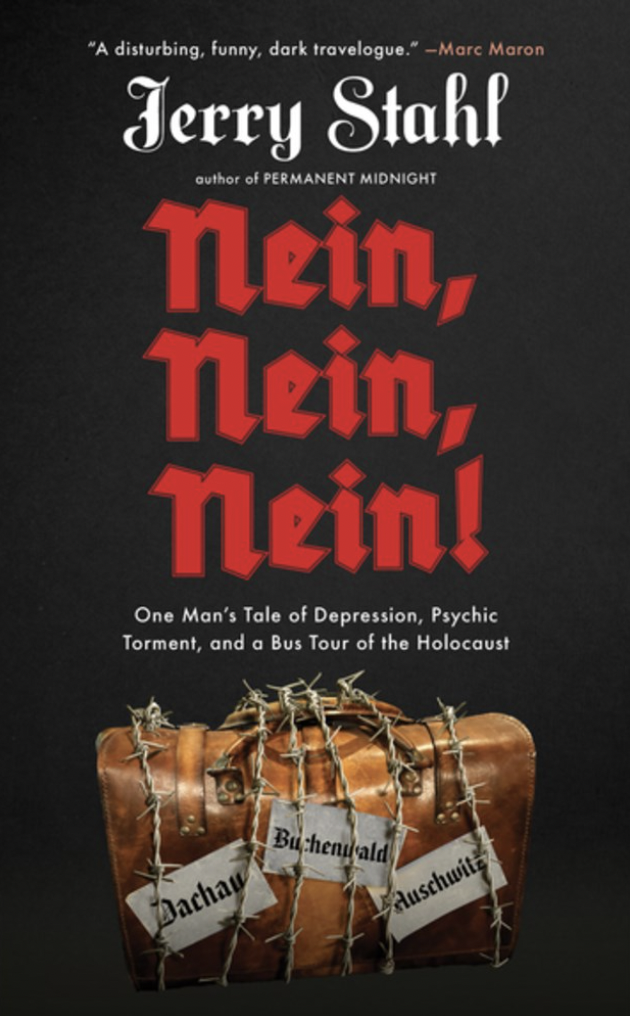 Or watch online by registering at the link below
https://us02web.zoom.us/webinar/register/WN_LBUZ-3HmS6Svg8iCcrIEig

“Few have such an eye for life’s perverse absurdity as Jerry Stahl, and his disturbing, hilarious, self- deprecating, and honest voice jumps off the page in Nein, Nein, Nein! There is nobody I’d rather take this gnarly journey with than Stahl, whose gonzo literary madness belies a steady, tender core."—Michelle Tea, author of Against Memoir

“Jerry Stahl, whose manic self-annihilating riffs dance on the volcano-lip of the abyss, is a writer I’ve been quoting compulsively for twenty-five years. His voice is a hell-broth of fascinating contradictions: the king of mordant cool who writhes with anxious terrors, the professed nihilist with a scalding moral vision, the gifted ironist who really bleeds.”—Christopher Goffard, writer/host of the podcasts Dirty John and Detective Trapp

About Nein, Nein, Nein!
A guided group tour to concentration camps in Poland and Germany allows Stahl to confront personal and historical demons with both deep despair and savage humor.

In September 2016, Jerry Stahl was feeling nervous on the eve of a two-week trip across Poland and Germany. But it was not just the stops at Auschwitz, Buchenwald, and Dachau that gave him anxiety. It was the fact that he would be traveling with two dozen strangers, by bus. In a tour group. And he was not a tour-group kind of guy.

The decision to visit Holocaust-world did not come easy. Stahl’s lifelong depression at an all-time high, his career and personal life at an all-time low, he had the idea to go on a trip where the despair he was feeling—out-of- control sadness, regret, and fear, not just for himself, but for the entire United States—would be appropriate. And where was despair more appropriate than the land of the Six Million?

Seamlessly weaving global and personal history, through the lens of Stahl’s own bent perspective, Nein, Nein, Nein! stands out as a triumph of strange-o reporting, a tale that takes us from gang polkas to tour-rash to the truly disturbing snack bar at Auschwitz. Strap in for a raw, surreal, and redemptively hilarious trip. Get on the bus.

About Jerry Stahl
Jerry Stahl is the author of ten books, including the best-selling memoir Permanent Midnight and the novels I, Fatty; Perv; Happy Mutant Baby Pills; and Bad Sex on Speed. A Pushcart Prize-winning author, Stahl's work has appeared in Vice, Esquire, the Believer, LA Review of Books, and the New York Times, among other places. He has written extensively for film and television, including HBO's Hemingway & Gellhorn, Bad Boys II, and the cult classic Dr. Caligari; series credits include Maron, CSI, and Escape at Dannemora, for which he received an Emmy nomination. Stahl has taught with the InsideOUT Writers program for incarcerated youth, edited The Heroin Chronicles for Akashic Books, and appears in the documentary series San Quentin Film School. He has two daughters, and lives with artist Zoe Hansen.

About Joshua Mohr
Joshua Mohr is the author of the memoir Sirens and of several novels, including Damascus, which The New York Times called "beat-poet cool." His novel All This Life won the Northern California Book Award. He is the founder of Decant Editorial.

Nein, Nein, Nein!: One Man's Tale of Depression, Psychic Torment, and a Bus Tour of the Holocaust (Hardcover)