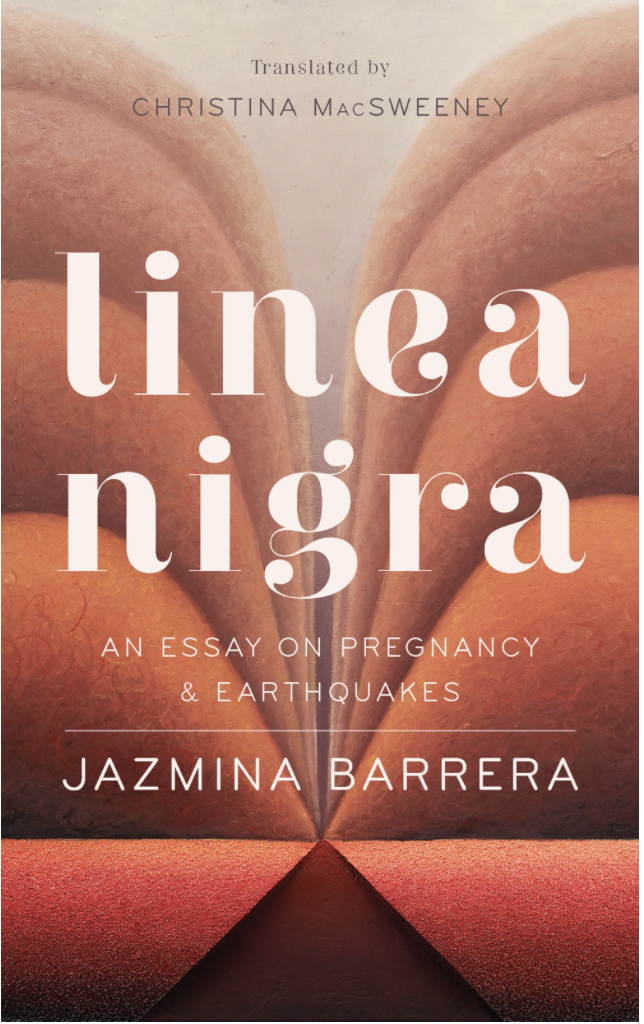 In proud partnership with the Center for the Art of Translation
Join us on Thursday, May 5 at 7pm PT when Jazmina Barrera is joined by translator Christina MacSweeney and Silvia Oviedo to celebrate the release of Linea Nigra at 9th Ave!

Or watch online by registering at the link below
https://us02web.zoom.us/webinar/register/WN_jwndVZpSSMSsnMfW4-0OYg

Praise for Linea Nigra
“This book is such a wonder and joy. I only wish it were a few thousand pages longer, so I could have the company of its intelligence and poetry for all the phases of my life.” —Rivka Galchen, author of Everyone Knows Your Mother Is a Witch

“In nuanced observation, and with enormous humor, [Barrera] shares how things and people can be known and understood, while allowing, as in life and death— for what can never be known, or understood.” —Leanne Shapton, author of Guestbook

“Barrera offers a moving study of pregnancy, family, art, and loss in this showstopping essay...[her] voice is meditative, bolstered by poetic turns of phrase, precise language, and fresh metaphors. ‘It’s impossible to be original when you write about being a mother,’ Barrera reflects, though her own originality is striking. This beautiful meditation is thick with profound insights.” —Publishers Weekly (starred review)

About Linea Nigra
“Eminently worthy of acclaim.” —Vogue (The Best Books of 2022 So Far)

An intimate exploration of motherhood, Linea Nigra approaches the worries and joys of childbearing from a diverse range of inspirations and traditions, from Louise Bourgeois to Ursula K. Le Guin to the indigenous Nahua model Luz Jiménez. Part memoir and part manifesto, Barrera’s singular insights, delivered in candid prose, clarify motherhood while also cherishing the mysteries of the body.

About Jazmina Barrera
Jazmina Barrera was born in Mexico City in 1988. She was a fellow at the Foundation for Mexican Letters. Her book of essays Cuerpo extraño (Foreign Body) was awarded the Latin American Voices prize from Literal Publishing in 2013. In 2020, Two Lines Press published her On Lighthouses in a translation from Christina MacSweeney. She has also published work in various print and digital media, such as Nexos, Este País, Dossier, Vice, El Malpensante, Letras Libres and Tierra Adentro. She has a Master's Degree in Creative Writing in Spanish from New York University, which she completed with the support of a Fulbright grant. She was a grantee of the Young Creators program at FONCA. She is editor and co-founder of Ediciones Antílope. She lives in Mexico City.

About Christina MacSweeney
Christina MacSweeney received the 2016 Valle Inclan prize for her translation of Valeria Luiselli's The Story of My Teeth, and Among Strange Victims by Daniel Saldaña París was a finalist in the 2017 Best Translated Book Award. Among the other authors she has translated are: Elvira Navarro (A Working Woman, Rabbit Island), Verónica Gerber Bicecci (Empty Set, Palabras migrantes/Migrant Words), and Julián Herbert (Tomb Song, The House of the Pain of Others).

Silvia Oviedo López is a Spanish poet and translator based in San Francisco. Her work has appeared in different anthologies and journals on both sides of the Atlantic. She is the founder of Desbandada, a journal of original and translated poetry.

Linea Nigra: An Essay on Pregnancy and Earthquakes (Hardcover)