This event will be held at our 9th Ave. store 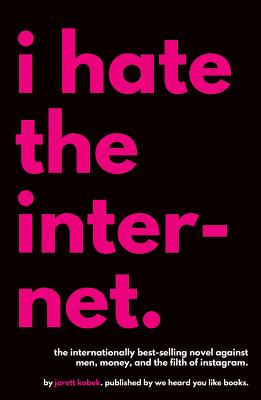 Jarett Kobek reads from his novel, I Hate the Internet.

Praise for I Hate the Internet:

"Could we have an American Houellebecq? Jarett Kobek might come close, in the fervor of his assault on sacred cows of our own secretly-Victorian era, even if some of his implicit politics may be the exact reverse of the Frenchman's. I just got an early copy of his newest, I Hate The Internet and devoured it - he's as riotous as Houellebecq, and you don't need a translator, only fireproof gloves for turning the pages." —Jonathan Lethem, The Scofield

"A riproaring, biting, form-follows-function burlesque of the digital age that click-meanders its way like the ADHD freaks we're all becoming while offering up compelling narrative lines that kept me clicking faster and faster. Read this book. Now."—Dodie Bellamy

"This is a relentless, cruel, hilariously inflamed satire of a loop of economic mystification and the reemergence of the credibility of the notion of Original Sin in the technological utopia of the present-day Bay Area and the world being remade in its image."—Greil Marcus, Pitchfork

"A grainy political and cultural rant, a sustained shriek about power and morality in a new global era. It's a glimpse at a lively mind at full boil... [An] entertaining novel of ideas... This book has soul as well as nerve. It suggests that, as the author writes, "the whole world was on a script of loss and people only received their pages moments before they read their lines."—Dwight Garner, The New York Times

About I Hate the Internet:

What if you told the truth and the whole world heard you? Would you expect to be believed? What if you lived in a country swamped with Internet outrage? What if you were a woman living in a society that hated women? In this, his first full-length novel, Jarett Kobek answers the questions of our moment: Why do we live with rank misery seeping from the world's cellphones and computers? Why do we applaud the enrichment of tech CEOs at the expense of the weak and the powerless? Why are we giving away our intellectual property? Why is activism in the 21st Century nothing more than a series of morality lectures typed into devices built by slaves? Set in the San Francisco of 2013, amongst the victims of a Silicon Valley bubble, I Hate the Internet offers a hilarious and obscene indictment of our online lives.

I Hate the Internet (Paperback)

What if you told the truth and the whole world heard you? Would you expect to be believed? What if you lived in a country swamped with Internet outrage? What if you were a woman living in a society that hated women?