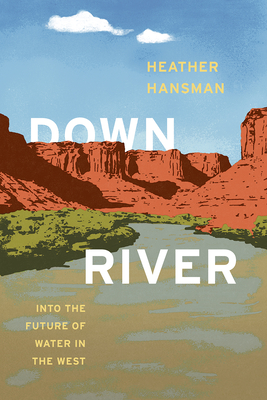 Heather Hansman discusses her new book, Down River: Into the Future of Water in the West.

Praise for Down River

“Heather Hansman’s account of her 730-mile solo raft trip down the Green River is more than a terrific adventure story. She ably explains why water in the West doesn’t concern only the West and why simple answers to water questions are never as simple as they seem.” David Owen, author of Where the Water Goes

“History, politics, science, reportage, and adventure all whirl together in Downriver, a deeply researched and intimate exploration of water’s uncertain fate in the American West. In this narrative journey along the Green River, Heather Hansman navigates turbulent waters and diverse worldviews with compassion, grit, and an overriding respect for complexity. This book is graced with insights that can only be won with a paddle in hand and a sense of our collective future at stake.” Kate Harris, author of Lands of Lost Borders

“In her journey down the Green River, Heather Hansman brilliantly captures the complexity of the Colorado River through the lens of its largest tributary.  Her balanced and thoughtful investigation into the river's many uses, the colorful characters that depend on it,and those who have dedicated careers to it will leave readers questioning their own biases and wanting to learn more about the landscape, its people, and its future. Downriver is a must read for those interested in the Colorado River and the future of the West.” Matt Rice, Director, Colorado River Basin Program

The Green River, the most significant tributary of the Colorado River, runs 730 miles from the glaciers of Wyoming to the desert canyons of Utah. Over its course it meanders through ranches, cities, national parks, endangered fish habitats, and some of the most significant natural gas fields in the country, as it provides water for 33 million people. Stopped up by dams, slaked off by irrigation, and dried up by cities, the Green is crucial, overused, and at risk, now more than ever.

Fights over the river’s water, and what’s going to happen to it in the future, are longstanding, intractable, and only getting worse as the West gets hotter and drier and more people depend on the river with each passing year. As a former raft guide and an environmental reporter, Heather Hansman knew these fights were happening, but she felt driven to see them from a different perspective—from the river itself. So she set out on a journey, in a one-person inflatable pack raft, to paddle the river from source to confluence and see what the experience might teach her. Mixing lyrical accounts of quiet paddling through breathtaking beauty with nights spent camping solo and lively discussions with farmers, city officials, and other people met along the way, Downriver is the story of that journey, a foray into the present—and future—of water in the West.

Downriver: Into the Future of Water in the West (Hardcover)

Award-winning journalist rafts down the Green River, revealing a multifaceted look at the present and future of water in the American West.

The Green River, the most significant tributary of the Colorado River, runs 730 miles from the glaciers of Wyoming to the desert canyons of Utah.