9th Ave: The Future of Translation with Çedilla & Co. 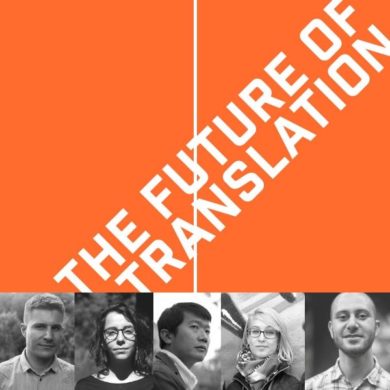 Sean Gasper Bye, Elisabeth Jaquette, Julia Sanches, Jeremy Tiang and Jeffrey Zuckerman, members of Çedilla & Co., a collective of literary translators representing a wide range of writers, languages, and presses, join us to talk about the future of translation and share a little about their current projects. Sponsored by The Center for the Art of Translation.

Sean Gasper Bye is a translator of Polish, French, and Russian literature and head of humanities programming for the Polish Cultural Institute in New York. He has translated work by some of Poland’s leading nonfiction writers, including Małgorzata Szejnert, Paweł Smoleński, and Lidia Ostałowska. His translations have been published in Words Without Borders, Continents, and In Other Words. An excerpt of his translation of Filip Springer’s History of a Disappearance (Restless Books) won the Asymptote Close Approximations Prize in 2016.

Elisabeth Jaquette is a translator from Arabic, instructor at Hunter College, and executive director of the American Literary Translators Association (ALTA). Among her book-length translations are The Apartment in Bab el-Louk by Donia Maher, illustrated by Ganzeer and Ahmed Nady, and The Queue by Basma Abdel Aziz. Elisabeth is the recipient of a PEN/Heim Translation Grant and an English PEN Translates Award. Her work has been shortlisted for the TA First Translation Prize, and longlisted for the Best Translated Book Award.

Julia Sanches is a translator of Portuguese, Spanish, French, and Catalan. Her book-length translations are Now and at the Hour of Our Death by Susana Moreira Marques (And Other Stories, 2015) and What are the Blind Men Dreaming? by Noemi Jaffe (Deep Vellum, 2016). Her shorter translations have appeared in Suelta, The Washington Review, Asymptote, Two Lines, Granta, Tin House, Words Without Borders, and Revista Machado, among others. Having spent several years as a literary agent, Julia has decided to focus her energies on translation and advocating for the authors she most loves from foreign languages.

Jeremy Tiang has translated novels by Yeng Pway Ngon, Li Er, Zhang Yueran, Su Wei-Chen, and Chan Ho-Kei; and non-fiction by Yu Qiuyu and Jackie Chan. He also writes and translates plays, and is the author of It Never Rains on National Day and State of Emergency, which won the Singapore Literature Prize. Jeremy is the Managing Editor of Pathlight magazine and a member of the translation collective Cedilla & Co. He lives in Brooklyn.

Jeffrey Zuckerman is a translator of French and the Digital Coordinator at Music & Literature Magazine. His translations include Ananda Devi’s Eve Out of Her Ruins, the diaries of the Dardenne brothers, and Jean Genet’s The Criminal Child. He has also contributed shorter pieces to Frieze, The New Republic, The NYRDaily, The Paris Review Daily, The White Review, and VICE. Jeffrey studied English literature and literary translation at Yale University, and has served as a judge for the PEN Translation Prize and the National Translation Award. He is a recipient of a PEN/Heim Translation Fund grant for his ongoing work on the complete stories of Hervé Guibert.