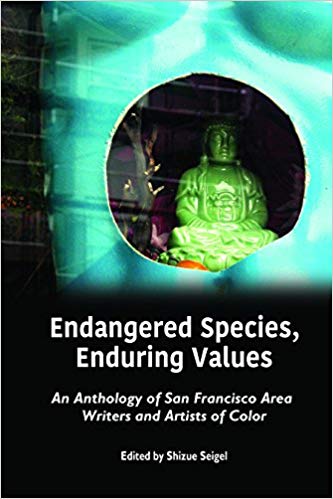 An Anthology of prose, poetry and artwork by San Francisco Area Writers & Artists of Color ENDANGERED SPECIES, ENDURING VALUES is a guide to the real San Francisco-the seldom-heard 58% of the population that brings color and diversity to the city in every sense of the word. Includes than 150 pieces by more than 70 creatives of color with roots in Native America, Africa, Asia, Latin America, the Caribbean, the Middle East, and Europe. Contributors include current SF Poet Laureate Kim Shuck, and artists, curators, physicians, educators, poets, performers, and activists for unions, LGBT, mental health, housing and more.

Shizue Seigel, editor of Enduring Species; Enduring Values, is a Japanese American writer and visual artist. Her five books include Standing Strong! Fillmore & Japantown and In Good Conscience: Supporting Japanese Americans during the Internment. Her prose and poetry have been published in All the Women in My Family Sing, Your Golden Sun Still Shines, Cheers to Muses, InVasian and other anthologies, and in Eleven Eleven, Away Journal, Persimmon Tree, Whirlwind Magazine, among others. She leads monthly Write Now! Writing workshops at the San Francisco Public Library, and  is a two-time recipient of the San Francisco Art Commission Individual Artist Commission and a VONA Fellow, Her artwork has been exhibited at SOMArts Cultural Center, Arts at CIIS, the Thoreau Center, UC Santa Barbara, the Kinsey Institute and other venues.

Francee Covington. During a successful TV career as a producer, director and writer of news, documentaries, public affairs and magazine shows, Francee Covington worked at television stations WCBS in New York, WBZ Boston and in San Francisco at KGO, KPIX, and KQED.  She later formed her own video production company and led it for more than twenty years.  Her clients included numerous Fortune 500 companies, The Oprah Show, and city and state agencies.  Active in the community, she currently serves on the San Francisco Fire Commission.  She’s retired, lives in San Francisco and is working on a collection of short stories.

Jennifer Hasegawa is a poet and information architect. She grew up in Hilo HI and has lived in the San Francisco Bay Area for 25 years. Her poetry and short stories have appeared in Tule Review, Standing Strong! Fillmore & Japantown: An Anthology, and the San Francisco Bay Guardian. Her poetry manuscript, La Chica’s Field Guide to Banzai Living, was awarded the San Francisco Foundation’s Joseph Henry Jackson literary award in 2014. She is currently engaged in the study of several paranormal phenomena, including alien encounters, Marian apparitions, Sinéad O’Connor, and Bitcoin.

Gail Mitchell, author of Bone Songs, received her MFA from San Francisco State University. She is a native San Franciscan who draws from her Black and Muskogee, Creole and Italian heritage. In the beginning was the word and I’ve drawn on it, to map the internal terrain and make sense of the external world, to investigate life and death, traversing a language that leaves me spellbound.  I pick words like gems to make the right necklace to go out into the world. I think of jewelry as amulets to protect and of course as adornment to help one shine. I am a jeweler and a poet. I am a maker. It is a must a desire that runs as deep as breath.

Tony Robles was born and raised in San Francisco of Filipino and African American heritage. His books  Cool Don’t Live Here No More—A Letter to San Francisco (2015) and Fingerprints of a Hunger Strike (2017) were published by Ithuriel’s Spear Press.  He is the author of 2 children’s books, Lakas and the Manilatown Fish and Lakas and the Makibaka Hotel, published by Children’s Book Press. In 2017, he was awarded a San Francisco Art Commission Individual Artist Commission and short-listed for poet laureate of San Francisco. He carries on the legacy of his late uncles, Al Robles, activist poet and scholar, and Russell Robles, co-founder of SOMArts Cultural Center, by serving as board president of the Manilatown Heritage Foundation and working for housing and senior rights.

Dr. Sriram Shamasunder, a poet and doctor at UCSF, has spent the better part of the last 10 years working in Burundi, Haiti, Rwanda and India. He is interested in health equity and narrative equity, working towards a world where lives are of equal value both the health care we deliver and the stories we highlight.