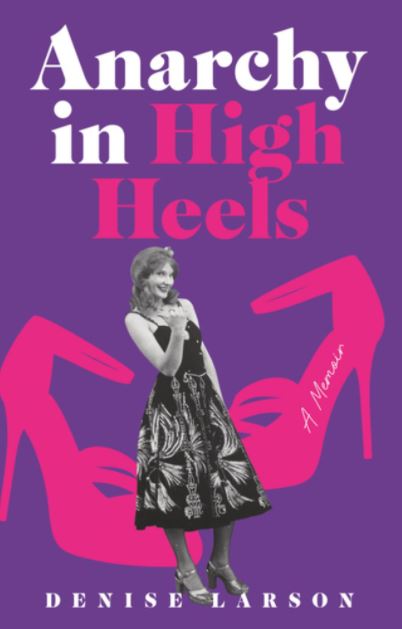 Join us on Tuesday, July 27 at 6pm PT for the launch of Denise Larson's memoir, Anarchy in High Heels,  with Debra Pollock in-store at 9th Ave!

Masks Required.
You can watch the event online by registering at the link below

Praise for Anarchy in High Heels
“This is a delightfully nostalgic peek into the Baby Boomer-era of funny, feminist Americana.”
—Anna Fields, author of The Girl in the Show - Three Generations of Comedy, Culture, and Feminism

“Denise Larson proves a wise and witty guide to the taboo-busting, iconoclastic underground scene of '70s San Francisco, charting the development of her own artistic growth and confidence through spearheading the subversive, ground-breaking ensemble Les Nickelettes, who served notice that women could be outspoken, raunchy, and above all funny.”
—Ellin Stein, author of That's Not Funny, That's Sick: The National Lampoon and the Comedy Insurgents Who Captured the Mainstream

About Anarchy in High Heels
The unabashed story of an all-female performance group unleashing their unique feminine satire in the early 1970s—a time when being a “funny feminist” was considered an oxymoron.

In 1972, access to birth control and a burn-your-bra ethos were leading young women to repudiate their 1950s conservative upbringing and embrace a new liberation. Denise Larson was a timid twenty-four-year-old actress wannabe when, at an after-hours countercultural event, The People’s Nickelodeon, she accidentally created Les Nickelettes. This banding together of ¬¬like-minded women with an anything-goes spirit unlocked a deeply hidden female humor. For the first time, Denise allowed the suppressed satirical thoughts dancing through her head to come out in the open. Together with Les Nickelettes, which quickly became a brazen women’s lib troupe, she presented a series of feminist skits, stunts, and musical comedy plays. In 1980, The Bay Guardian described the group as “nutty, messy, flashy, trashy, and very funny.”

With sisterhood providing the moxie, Denise took on leadership positions not common for women at the time: playwright, stage director, producer, and administrative/artistic director. But, in the end, the most important thing she learned was the power of female friendship.

About Denise Larson
Denise Larson is a native Californian: she went to elementary school in the Los Angeles suburb town of Torrance and high school in the San Joaquin Valley city of Manteca, and finally, after college, she put down roots in San Francisco. With a BA in theater from San Francisco State University, she pinned her dreams on becoming an experimental theater artist in the '70s counterculture milieu of the Bay Area. Along that path she founded Les Nickelettes. For thirteen years, she helmed the feminist theater company and assumed the role of actress, playwright, producer, stage director, and administrative/artistic director. Then she gave it all up to become a mother and teacher. After a twenty-year career in early childhood education, she retired and took up writing. Denise still lives in San Francisco with her husband and their cat. She has also returned to her first love: theater. She is taking an improv class, and collaborating with other performers to form a new theatre group: Cosmic Elders. The author resides in San Francisco, CA.