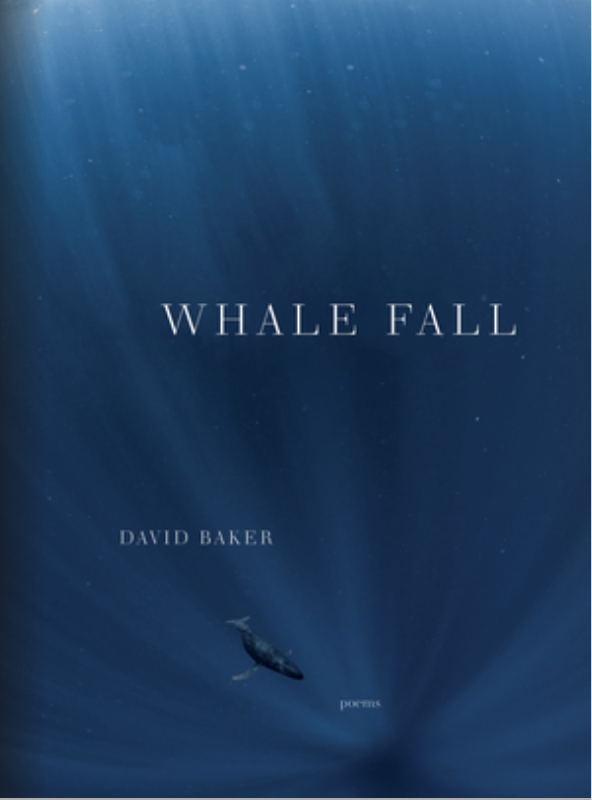 Join us on Wednesday, November 9 at 7pm PT when David Baker celebrates his latest collection, Whale Fall, with Atsuro Riley at 9th Ave!

Or watch online by registering at the link below
https://us02web.zoom.us/webinar/register/WN_3cv-7JVTRCKrnGtWjXk54Q

Praise for Whale Fall
"The craft of Whale Fall defies. It asserts, for me, a definition of poetry: an unbearable gulf of feeling made indelible by form." - Diane Seuss, Paris Review

"[Baker] locates his experiences in an understanding of the natural world that is both scientific and transcendent." - Ron Charles, Washington Post Book Club

"Baker’s 12th volume of poetry finds him in a wistful, elegiac mood, paying witness to the shared frailties of the natural world and the aging, ailing speaker." - New York Times Book Review

About Whale Fall
A masterful and moving new volume from a “peerless poet of the natural world” (New York Times Book Review).

Acclaimed as an essential voice of the American Midwest, David Baker expands both his environment and his form in his eleventh collection. Whale Fall is about time, measured in the wingbeats of a hummingbird or the epochs of geological change, and about place, whether a backyard in Ohio or the slopes of a melting glacier.

In the exquisite, musical title poem, a deft hybrid of eco-poetic alarm and intimate narrative, Baker transports us to the deep sea as a single gray whale carcass falls, decays, and is reinhabited by a cosmos of teeming lives. Among the strands of ocean health, microplastics, and related calamities of human disregard, the poet weaves in a personal story of chronic illness. The result is a stirring, confident work, astonishing in its emotional acuity and lyric range.

Each poem in Whale Fall is an echolocation, emitting its music to situate itself among others in the vastness of the world. Amidst climate change and catastrophe, as amidst a blooming viburnum or a viral disease, these poems send their songs across empty spaces of a line, a page, or a continent, to see who is out there, moving in the depths of being.

David Baker is a poet, educator, editor, and literary critic.  He was born in 1954 in Bangor, Maine, grew up in Jefferson City, Missouri, and since 1983 has lived in central Ohio.  He received his B.S.E. and M.A. degrees in English from the University of Central Missouri and his Ph.D. in English from the University of Utah, where he also served from 1980-83 as Editor and Poetry Editor of Quarterly West.  Since 1984 Baker has taught at Denison University, in Granville, Ohio, where he is currently a teaching Emeritus Professor of English.  Baker also serves frequently on the faculty of the MFA program for writers at Warren Wilson College and at writers’ workshops around the country.  After serving as Poetry Editor of The Kenyon Review for more than twenty-five years, he currently curates the annual “Nature’s Nature” feature for the magazine.

Atsuro Riley is the author of Heard-Hoard (University of Chicago Press, 2021), winner of the Alice Fay di Castagnola Award from the Poetry Society of America, a finalist for PEN America’s Voelcker Poetry Award, a Boston Globe Best Book of 2021, and a Bookworm Top 10 Book of the Year. Riley’s work has been honored with the Lannan Foundation Literary Fellowship, the Pushcart Prize, and the Wood Prize given by POETRY magazine. His poems have been anthologized in The Mind Has Cliffs of Fall, The Open Door: 100 Poems, 100 Years of POETRY Magazine, The Oxford Anthology of Contemporary American Poetry, Poems of the American South, The McSweeney’s Book of Poets Picking Poets, Poems from Far and Wide, Vinegar and Char, Gracious, and Home: 100 Poems. Brought up in the South Carolina lowcountry, Atsuro Riley lives in San Francisco.

A masterful and moving new volume from a “peerless poet of the natural world” (New York Times Book Review).

A sweeping achievement from a poet whose "rhythms are as alive to the roll and tang of syllables on the tongue as they are to the circulation of blood and sap" (Rosanna Warren, Theodore Roethke Memorial Poetry Prize citation).

Winner of the Alice Fay di Castagnola Award from the Poetry Society of America, this new collection of verse from Atsuro Riley offers a vivid weavework rendering and remembering an American place and its people.

Recognized for his “wildly original” poetry and his “uncanny and unparalleled ability to blend lyric and narrative,” Atsuro Riley deepens here hi