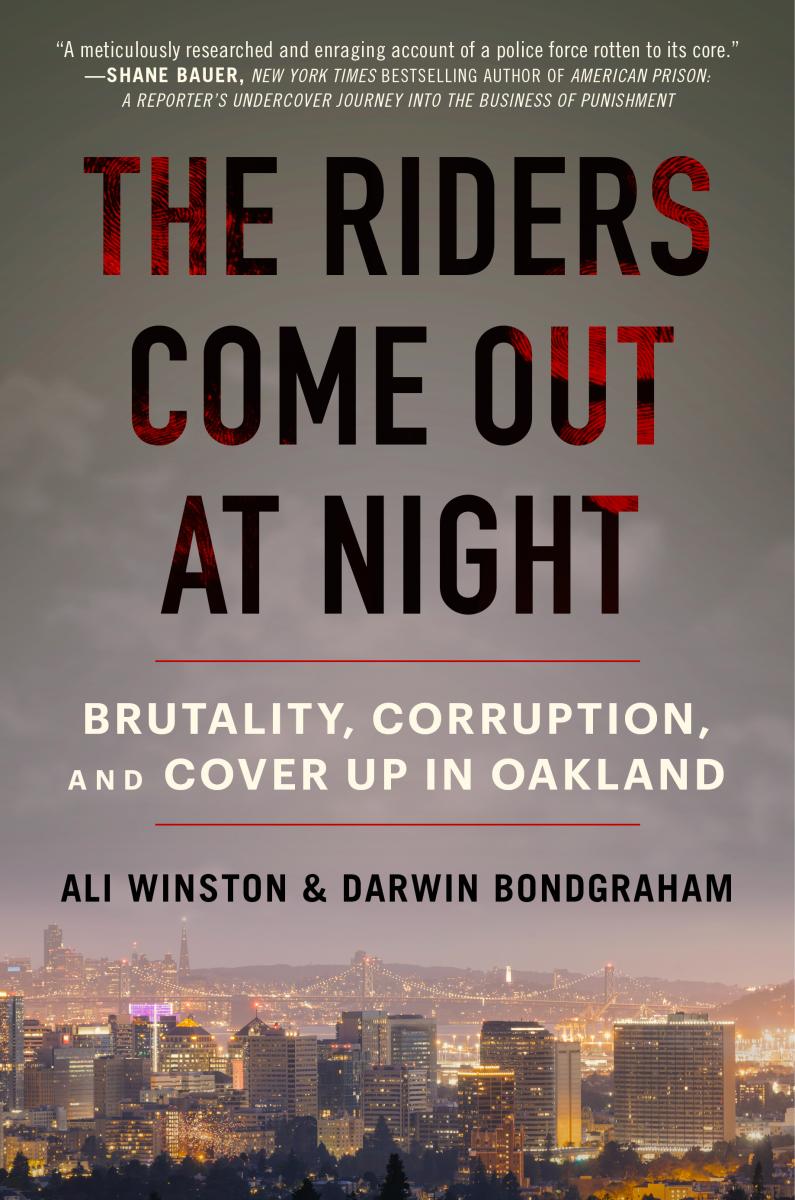 Join us on Thursday, January 19 at 7pm PT for the release of The Riders Come Out at Night: Brutality, Corruption, and Cover Up in Oakland with authors Ali Winston and Darwin Bondgraham in conversation with Joe Eskenazi at 9th Ave!

Masks Required for In-Person Attendance
Or watch online at the link below
https://youtu.be/qiPYqOCdYCI

Praise for The Riders Come Out at Night
"A fiercely argued case that the police can’t be trusted to police themselves—and that such policing is essential." —Kirkus Reviews

“Two of the best police reporters in Oakland’s recent history have put together a meticulously researched and enraging account of a police force rotten to its core. The Riders Come Out at Night is a poignant illustration of an undeniable fact: that the problem with policing in America isn’t just about crooked cops. The problem is with the police departments themselves.” —Shane Bauer, New York Times bestselling author of American Prison: A Reporter’s Undercover Journey into the Business of Punishment

"In this spell-binding expose, crack investigative journalists Winston and BondGraham uncover the malign collusion between segregation, police corruption, and gentrification in the Jerry Brown era. A stunner." —Mike Davis, recipient of a MacArthur Fellowship and author of Set the Night on Fire and City of Quartz

About The Riders Come Out at Night
From the Polk Award–winning investigative duo comes a critical look at the systematic corruption and brutality within the Oakland Police Department, and the more than two-decades-long saga of attempted reforms and explosive scandals.

No municipality has been under court oversight to reform its police department as long as the city of Oakland. It is, quite simply, the edge case in American law enforcement.

The Riders Come Out at Night is the culmination of over twenty-one years of fearless reporting. Ali Winston and Darwin BondGraham shine a light on the jackbooted police culture, lack of political will, and misguided leadership that have conspired to stymie meaningful reform. The authors trace the history of Oakland since its inception through the lens of the city’s police department, through the Palmer Raids, McCarthyism, and the Civil Rights struggle, the Black Panthers and crack eras, to Oakland’s present-day revival.

Readers will be introduced to a group of sadistic cops known as “The Riders,” whose disregard for the oath they took to protect and serve is on full, tragic, infuriating display. They will also meet Keith Batt, a wide-eyed rookie cop turned whistleblower, who was unwittingly partnered with the leader of the Riders. Other compelling characters include Jim Chanin and John Burris, two civil rights attorneys determined to see reform through, in spite of all obstacles. And Oakland’s deep history of law enforcement corruption, reactionary politics, and social movement organizing is retold through historical figures like Black Panther Huey Newton, drug kingpin Felix Mitchell, district attorney and future Supreme Court Justice Earl Warren, and Mayor Jerry Brown.

The Riders Come Out at Night is the story of one city and its police department, but it’s also the story of American policing—and where it’s headed.

About the Authors
Ali Winston is an independent reporter covering criminal justice, privacy, and surveillance. His work has been rewarded with several awards, including the George Polk Award for local reporting in 2017. Ali is a graduate of the University of Chicago and the University of California, Berkeley. He lives in New York. You can follow him on Twitter @AWinston.

Darwin BondGraham has reported on gun violence for The Guardian and was an enterprise reporter for the East Bay Express. BondGraham’s work has also appeared with ProPublica and other leading national and local outlets. He holds a doctorate in sociology from the University of California, Santa Barbara, and was the co-recipient of the George Polk Award for local reporting in 2017. He lives in Oakland, California. You can follow him on Twitter @DarwinBondGraha.

The Riders Come Out at Night: Brutality, Corruption, and Cover-up in Oakland (Hardcover)

From the Polk Award–winning investigative duo comes a critical look at the systematic corruption and brutality within the Oakland Police Department, and the more than two-decades-long saga of attempted reforms and explosive scandals.