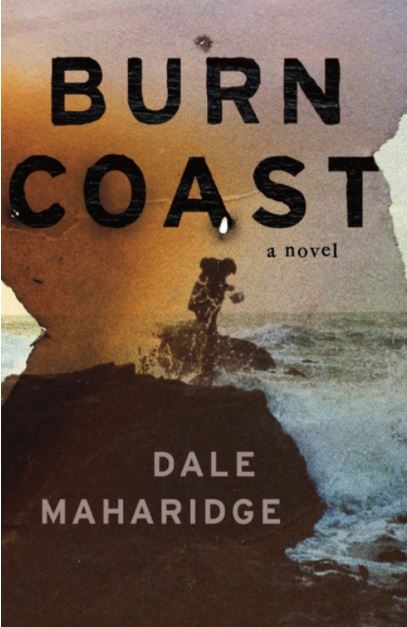 Join us on Tuesday, January 18 at 7pm PT when Dale Maharidge celebrates the launch of his new novel, Burn Coast, with Katherine Seligman at 9th Ave!

Pre-order Burn Coast and receive a signed/personalized copy!
Simply write "signed" or who you would like the book made out to in your online order comment, and we'll handle the rest!

About Burn Coast
“A mystery of disappearances, and land issues, and unmoored hippies, and so much more, Dale Maharidge applies his considerable prose gifts to fiction and builds a world both unnerving and inviting. A sharply smart and page-turner of a read." —Aimee Bender

Zoë Vanderlip is missing. The Ark is empty. And nobody on McGee Ridge can agree about what exactly happened to her.

Earthquake-rattled and clinging to the thousand-foot cliffs of the Northern California coast, McGee Ridge is nestled in one of a very few truly wild places left in the Lower 48. It is also home to a band of off-grid outlaws who vanished behind the famed Redwood Curtain in the 1960s, and whose time there is swiftly coming to an end.

Will Spector, a burned-out journalist for the LA Times, arrived here to build a wilderness cabin for himself in the 90s, after spending a decade as a war correspondent. In a community that subsists mainly off illegal cannabis farming, Will is an outlier. As is Zoë Vanderlip, the revered matriarch of the original 60s settlers, whose adult son Klaus is one of the largest growers in the region. Unlike nearly everyone else, neither Will nor Zoë has ever grown marijuana, but when Zoë suddenly goes missing from her home—a large hand-built structure known as the Ark—the industry’s competing forces can no longer be ignored.

Pairing up with Daniel Likowski, a principled but mysterious grower whose business has been crushed by legalization, Will finds himself swept into a world of lost idealism and desperate loners, mobsters and corporate shell companies, violence and hypocrisy, all operating beneath the canopy of an ancient forest teetering at the very edge of the continent. Spurned on both by his journalistic zeal and a strange love for the place and its people, Will’s investigation is a journey to understand not just what happened to Zoe, but all of them.

In this atmospheric rural noir, Pulitzer Prize-winning journalist Dale Maharidge's debut novel plunges readers into a country that has existed for decades beyond the bounds of America-at-large, but nevertheless reflects the essential conflicts of our divided culture.

About Dale Maharidge
Dale Maharidge, a tenured professor at the Graduate School of Journalism at Columbia University, is the author of ten books, one of which was awarded the 1990 non-fiction Pulitzer Prize. He was a visiting professor at Stanford University. He's written for Rolling Stone, George Magazine, The Nation, Mother Jones, and The New York Times, among others. Maharidge was a 1988 Nieman Fellow at Harvard University. He has had artistic residencies at both Yaddo and the MacDowell Colony. His first book, Journey to Nowhere: The Saga of the New Underclass, inspired Bruce Springsteen to write two songs. His second book, And Their Children After Them, won the Pulitzer Prize. Selected other books include The Coming White Minority: California, Multiculturalism & the Nation's Future, Someplace Like America, Bringing Mulligan Home: The Other Side of the Good War, and most recently, Fucked at Birth: Recalibrating the American Dream for the 2020s.

About Katherine Seligman
Katherine Seligman is a journalist and author of At the Edge of the Haight, which won the PEN Bellwether Prize for Socially Engaged Fiction. She has been a reporter at USA Today, the San Francisco Examiner and a staff writer at the San Francisco Chronicle Sunday Magazine. Her writing has appeared in Life, Redbook, The Sun Magazine, the anthology “Fresh Takes” and elsewhere. Her essay “Someone to Listen” was a Best American Essays notable selection. She lives in San Francisco. Find more at www.katherineseligman.com.

"I would recommend that anyone else with a weed novel hold off for at least a year or two, because I can quite confidently say that it won't be as thorough, thrilling, and true to the cannabis space as Burn Coast." --High Times Magazine

At the Edge of the Haight (Paperback)

The 10th Winner of the 2019 PEN/Bellwether Prize for Socially Engaged Fiction, Awarded by Barbara Kingsolver

“What a read this is, right from its startling opening scene. But even more than plot, it’s the richly layered details that drive home a lightning bolt of empathy.