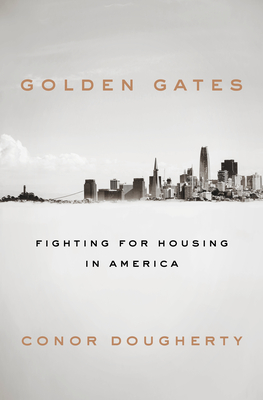 “Golden Gates is a careful consideration of the Bay Area's slow-burning housing crisis and deepening socioeconomic cleft, and a finely reported exploration of some more recent accelerants: political infighting, arcane policy, the strictures and incentives of capitalism, and, of course, the rapid growth and ascendance of Silicon Valley tech corporations. With precision, insight, and flashes of humor, Conor Dougherty delivers intimate glimpses of a region in transition, and a sobering reminder that San Francisco, these days, is not so much an exception as a harbinger of the future for America's cities.”—Anna Wiener, author of Uncanny Valley

“Golden Gates is a terrific work of explanatory journalism. If you want to understand the colliding forces that have turned the San Francisco Bay Area into a housing powder keg and threaten to engulf many more cities across the country, you need to read this book.”—John Carreyrou, New York Times bestselling author of Bad Blood

“How do we solve a problem like California, with its three-hour commutes and sky-high rents? Deeply-reported and fast-paced, Golden Gates introduces you to the people fighting for and against affordable housing in one of the world’s hottest real estate markets. In following the clashes between political leaders, tenant activists, developers, and working families, Dougherty brings a novel perspective to one of the nation’s most urgent problems.”— Matthew Desmond, author of Evicted: Poverty and Profit in the American City

A stunning, deeply reported investigation into the housing crisis

Spacious and affordable homes used to be the hallmark of American prosperity. Today, however, punishing rents and the increasingly prohibitive cost of ownership have turned housing into the foremost symbol of inequality and an economy gone wrong. Nowhere is this more visible than in the San Francisco Bay Area, where fleets of private buses ferry software engineers past the tarp-and-plywood shanties where the homeless make their homes. The adage that California is a glimpse of the nation's future has become a cautionary tale.

With propulsive storytelling and ground-level reporting, New York Times journalist Conor Dougherty chronicles America's housing crisis from its West Coast epicenter, peeling back the decades of history and economic forces that brought us here and taking readers inside the activist uprisings that have risen in tandem with housing costs.

To tell this new story of housing, Dougherty follows a struggling math teacher who builds a political movement dedicated to ending single-family-house neighborhoods. A teenaged girl who leads her apartment complex against their rent-raising landlord. A nun who tries to outmaneuver private equity investors by amassing a multimillion-dollar portfolio of affordable homes. A suburban bureaucrat who roguishly embraces density in response to the threat of climate change. A developer who manufactures homeless housing on an assembly line.

Sweeping in scope and intimate in detail, Golden Gates captures a vast political realignment during a moment of rapid technological and social change.

Conor Dougherty is an economics reporter at The New York Times. He previously spent a decade in New York covering housing and the economy for The Wall Street Journal. He grew up in the Bay Area and lives with his family in Oakland.

About our Conversation Partner

Joe Eskenazi was born in San Francisco, raised in the Bay Area, and attended U.C. Berkeley. Eskenazi was a writer and columnist for SF Weekly from 2007 to 2015, and a senior editor at San Francisco Magazine from 2015 to 2017.  He has been the managing editor of Mission Local since summer of 2018. You may also have read his work in the Guardian (U.S. and U.K.); San Francisco Public Press; San Francisco Chronicle; San Francisco Examiner; Marin Magazine; and elsewhere. In 2019, the Northern California branch of the Society of Professional Journalists named Eskenazi the Journalist of the Year.